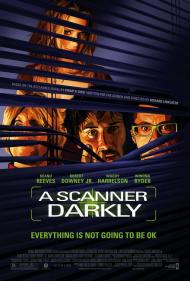 The way I see it, a movie can generate any emotion at all so long as it generates something. It's even better if it manages to generate more than one. But the hardest emotion to pull off is depression. I don't mean that it's hard to depress an audience. I've been depressed by lots of movies. What I mean is that it's hard to depress an audience and still have them enjoy your movie. Just about the only way to pull that one off is by also making the audience think, so you're depressed but it got you thinking about something, so that's okay. A Scanner Darkly, which might have pretensions of making its audience think, never really does and so just leaves you feeling depressed and a little bewildered.

It's set seven years in the future when 20% of the population is addicted to a drug known as Substance-D. Keanu Reeves plays a police officer who is assigned the case of suspected drug dealer Robert Arctor. The only problem is Reeves is actually Arctor. He is able to lead this double life because all undercover officers wear a high-tech suit while on the job that prevents anyone from discovering their true identity. However not only don't his superiors know his identity, Arctor, whose brain has been so affected by D, doesn't realize who he is either. The drug has turned him into a schizophrenic.

Most of the movie has no actual plot. We simply get to watch three paranoid druggies sit around growing more paranoid by the second and expounding upon wild theories. Some of it is slightly amusing and Robert Downey Jr. does a great job in his role, as does Harrellson. Although to be fair, I don't think playing someone on drugs is much of a stretch for either of them.

The oddest thing about this movie is the way that it has been animated. Apparently the actors were filmed as normal and then digitally painted over to transform them into animation. And the big question is, WHAT THE FUCK FOR? What is the point of this other than to say, "Hey look what I did! I painted pictures!" I found it to be totally annoying and pointless. It's like something a bored teen-ager might do on a free weekend with a movie and Photo Shop.

Near the end the plot finally kicks in, but even then the logic of it all is suspect, mainly because we've seen most of the movie through the eyes of Arctor whose grasp of reality is negligible. The two twist endings it tacks on in the last minutes are predictable and pointless since for the twist to work you'd have to care about someone, anyone, in this movie.

It seems that the point of this movie is to say, drugs are bad. Why then does the movie that's making this point appear to have been made by people on them?

I remember when this movie came out. A guy I worked with loaned me a paperback copy of the novel. I planned on seeing the movie after reading it. Well, although I enjoyed the book, I never got around to seeing this movie. Until now anyway. Scott's right that A Scanner Darkly is certainly best appreciated if you have some knowledge of, or have spent time doing, recreational drugs. The story is based on writer Philip K. Dick's real life drug experiences in the early 1970s. Writer/director Richard Linklater has crafted a very faithful movie adaptation.

There's a bit more plot than Scott claims. This future world is a police state where the authorities spy covertly on private citizens. These Scanners watch people's every move, including having sex, via hidden video cameras. The justification given for this constant surveillance is the rise of the drug my brother wrote about called Substance-D. It's highly addictive. As Robert Downey Jr.'s character says, you are either strung out on it or you've never tried it. There is no middle ground.

The most interesting visual component to the story is the way the Scramble Suits look. They hide the identity of the police officers by constantly shifting and changing each body part, with more than a million variations. I'm with Scott about the decision to animate the movie. I think it detracts from the story. And when you consider the fact that the movie was shot in less than one month but the animation process took an additional year and a half, you have to wonder if Linklater later regretted the decision himself. The added expense involved in animating the movie also resulted in a net loss at the box office.

Philip K. Dick's work has been very influential in Hollywood. Iconic movies such as Blade Runner, Total Recall, and Minority Report were all based on his books. A Scanner Darkly is told on a smaller scale than those other science fiction classics. And it is not as well known. It tells a twisted tale of drug addiction and police investigation wherein the detective and the suspect are one and the same. The cast is great and even though the animation feels gimmicky this is a faithful rendering of the author's work. Oh and in case you were wondering about the title, it comes from the Bible. It's a variation on 1 Corinthians 13:12 “For now we see through a glass darkly; but then, face to face: now I know in part; but then I shall know even as I am known.”