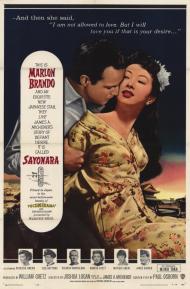 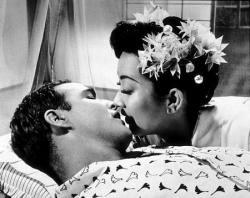 Sayonara is a slow moving but beautifully filmed story of racial intolerance. Set in Japan during the Korean War, it tells the story of Major Lloyd Gruver (Brando) a war hero flying ace who gets sent from Korea to Japan. Here he is confronted with the fact of his Air Force buddy Joe Kelly's (Buttons) impending nuptials to a Japanese girl even though there are strict U.S. Military rules against marrying members of the indigenous population. Originally against the idea, Major Gruver reluctantly agrees to be best man at the ceremony. A short time later he finds himself falling in love with a Japanese woman as well.

As I said the plot meanders along at a snails pace. There are long camera shots and lengthy dialogue scenes. There are several scenes of traditional Japanese Kabuki dancers. Ironically enough however, Ricardo Montalban plays one of them. Since the movie was meant as a protest against racism couldn't they at least have gotten a real Japanese actor to play the part?

The romance between Brando and the beautiful Miiko Taka is given most of the screen-time but the relationship between Red Buttons and Miyoshi Umeki provides the most compelling drama and entertainment. They would both receive Supporting Academy Awards for their roles as the doomed lovers. The scene where he discovers that she was planning to get her eye-lids slit open and then sown back up in order to pass for an American is tragic beyond words.

Brando, for his part, appears detached from his character. Sure he uses one of his trademark accents, in this case a good-old-boy twang, but missing is any real fire or anger. Instead he broods and stares off into space for what seem like extended periods of time. Patricia Owens is given the thankless role of Brando's jilted American fiancé and a very young James Garner has a supporting role but isn't given much to do. One thing's for sure, he has aged a hell of a lot better than Brando has.

Ultimately Sayonara is just too bloated. Easily thirty minutes of screen-time could have been trimmed away and the result would be a much tighter movie. Still it was ahead of its time in many respects and when compared to most other movies from the conservative nineteen-fifties it seems daring.