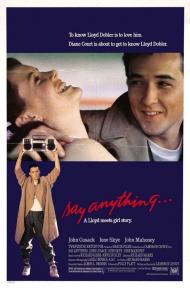 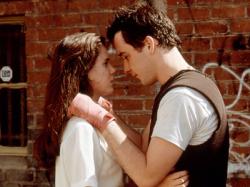 Ione Skye and John Cusack in Say Anything.

Say Anything is one of those movies that even if you've never seen it, you know of it. John Cusack holding the boombox over his head while Peter Gabriel's "In Your Eyes" plays out of it, is an iconic moment in 1980s cinema. What teenage boy didn't want to be Lloyd Dobler and what teenage girl didn't want to date him? What's great about the movie is that apart from the hair and the fashion choices, it holds up very, very well.

Cusack plays Lloyd, an every boy who's had a crush on class valedictorian Diane Court (Skye). After graduation he takes a chance and asks her out. To Lloyd and everyone else's surprise, she accepts. The movie plays out over that summer. In the fall, Diane is going to school in England. Diane's father (Mahoney), is under investigation by the IRS. He disapproves of Lloyd and sees him as a distraction. Because of her father, Lloyd and Diane's relationship goes through a rough patch, but his legal problems soon prove to be the real distraction for her.

A really good romantic movie like this one needs to show two fully developed characters. Most love stories tend to either focus on the man or the woman. This one starts from Lloyd's perspective, but ends from Diane's. Over the course of it though, they are both shown to be fully three-dimensional people. You also see their relationship develop rather than merely having two characters suddenly decide they're in love with each other as so many love stories do.

There are a lot of teen romantic comedies. This is one of that rare breed, a teen romantic drama. Sure, there's humor in the movie, but overall this one is serious, in a way that the snarky teen comedies of today would never be. Lloyd and Diane are earnest in their feelings, not aloofly ironic about them.

The story wouldn't have worked without two likeable and charming leads and Cusack and Skye are perfect in their roles. They're believable and you can empathize and identify with them. For Cusack, this would be the movie that pushed him into stardom. Skye however, would never find the same success again. She's still acting, but this will always be the movie she's known for.

If all you know this movie for is as the one with the boombox scene, you're missing out. Yes, that is a classic cinematic moment, but this movie is so much more than just that one scene.

Ione Skye, Jason Gould, and John Cusack in Say Anything.

I somehow never got around to seeing this movie when it came out. I'm sure I would have a somewhat different take on it if I had seen it as a young man. I still thoroughly enjoyed it but I wasn't as caught up in the romance of it as I would have been at 22 in 1989. Sure the iconic boombox moment remains as powerfully romantic today as any moment from 80's cinema, but the farther away I get from my youth the more difficult it becomes to imagine the intensity of feelings at that age.

And while this is definitely a love story between Lloyd and Diane, it is also a father/daughter drama. John Mahoney gives a heartfelt performance as Diane's dad, a morally complex character unlike what you normally see in this type of movie. In fact, producer James L. Brooks has said that the whole idea for this movie happened when he saw a father and daughter strolling along together and he imagined what would happen if the father had committed a crime. The title of the movie comes from the fact that her father repeatedly tells Diane that she can, "Say anything..." to him. The love story angle was an afterthought.

I agree completely with Scott about Lloyd and Diane. They are both very real people. Lloyd is a young man that almost anyone can relate to. He is technically an adult but he hasn't yet figured out what he wants to do with his life. He dreams of being a successful kick boxer but that seems more like a pipe dream than a possibility. Diane is an overachiever. She has her future carefully planned out. What she lacks are social skills, especially around people her own age. She seems old fashioned and too mature for her years. Lloyd makes her feel normal and she makes him feel popular. Ione Skye is fine as Diane Court, but John Cusack really shines as Lloyd Dobler. He's the quintessential outsider whose perseverance is rewarded and Cusack has never been more charismatic than he is in this movie.

In terms of popular culture, Say Anything sits right on the cusp between the 80s and the 90s. It is set in Seattle right before the whole grunge scene took off. The trench coat that Dobler wears became iconic and has become the uniform of choice for misfit teens ever since. This movie also reflects the beginning of hip hop's infiltration into white suburban culture. In one scene several boys Lloyd knows (including a very young Jeremy Piven) break into an impromptu rap routine.

Joan Cusack plays her real life brother's sister, Bebe Neuwirth made her movie debut in a cameo as a teacher, and Barbra Streisand's son Jason Gould plays a boy Lloyd and Diane meet at a party and give a ride home to. He may not have been written as gay but he comes across that way due to Gould's effeminate speaking voice and girlish hairstyle. He bears a striking resemblance to his famous mother (see photo).

Say Anything is remembered for that one incredibly romantic image but, as Scott wrote, it is much more than that. It is a surprisingly realistic look at that final summer between high school and the real world. It is about finding your true love but it's also about seeing your parent(s) as they really are. Say Anything is a solid movie debut by writer/director Cameron Crowe.