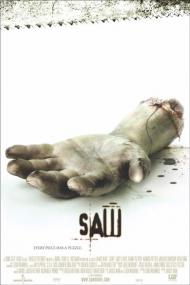 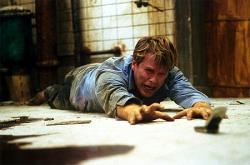 Saw is an intriguing horror film with an original premise. Done on a small budget, it still manages to pack suspense and a few twists into its story. Unfortunately, the movie's surprise ending, which has been promoted strongly, is a let down after all of the build up. While most of the story is unbelievable, it is at least plausible. The ending however, is just not possible.

The movie opens with a man, Adam, waking up in a tub of water. He discovers that he is manacled to a pipe in a large and decrepit industrial bathroom. With him in the room, also chained, is another man, a doctor (Elwes). In the middle of the room lies a dead body with a gun in one hand and mini-tape recorder in the other. Both Adam and the doctor discover a cassette tape in their pockets. After much stretching, Adam is able to get the player from the dead man's hands. The distorted voice on the tape informs them that he has kidnapped the doctor's wife and daughter and that unless the doctor kills Adam within 6 hours, his wife and daughter will die. Hidden around the room the two discover other objects as well, such as hacksaws that aren't strong enough to cut through chains, but are strong enough to cut through flesh and bone.

Through flashbacks it is revealed that the person holding them prisoner is known as the Jigsaw killer. His modus operandi is of setting up elaborate schemes wherein the victim is given a small opportunity to save their own life. For example, one woman is tied to a chair with a mechanical rig on her head that will rip her jaws apart in a certain amount of time. The key to unlocking the device is in the stomach of a dead man lying in the room with her. All she has to do is get herself untied, cut into the man's stomach, find the key and unlock herself before time runs out.

The movie builds suspense by revealing its secrets slowly. We learn how neither Adam nor the doctor is completely what they each claim to be at the beginning of the film. And the suspense is the best part of the story. For a film marketed partly on its gore and shock value, the film is lighter on blood and guts than you might expect. It's also missing any significant jump out of your seat moments. It is however, creepy, atmospheric, and did keep me guessing right up until the end. I just wish that the final resolution had felt more satisfying and less contrived.

If you like your movies dark and twisted and don't mind suspending your sense of disbelief for a little while, then Saw could be the movie for you. The queasy and the skeptical will want to look elsewhere for their horror movie fix. 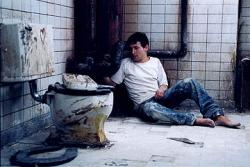 Saw is a psychological horror movie that, although there is a fair amount of bloodshed, relies more heavily on making the viewer imagine absolutely horrid situations and possibilities than on shoving every visual graphic detail down our throats. It is similar in concept to the movies Seven and Silence of the Lambs; they all depict violent acts that disgust more than scare.

The acting is pretty intense. I've never seen Cary Elwes in anything this heavy before but he pulls it off. The writing and editing are good. The pacing is brisk and the plot takes enough twists and turns to keep you guessing. Like Scott I found the premise and execution intriguing. I also agree, however, that the ending, while unexpected, is too farfetched to really work.

Saw is twisted enough for any fan of the genre, but to echo my brother, don't expect the climax to satisfy on a logical level. 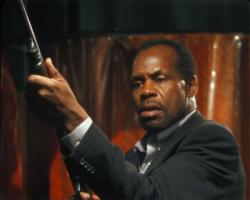 Saw is a fairly solid piece of writing. The Australian born Leigh Whannell wrote Saw with director James Wan. They created a near masterpiece of psychological terror. The ending is not a cheery one but it does stay in tone with the rest of this very dark film. Like all good mysteries, it keeps you guessing and misleads you several times.

As both Scott and Patrick wrote, this is not your usual horror film. There is some blood and a few jump out moments, but that is not where the horror is best. The greatest reaction you get from Saw is watching the characters react to the situations around them. The look on Whannell's face at the end of the movie was the scariest moment in the film for me.

The abductees are put in amazingly stressful situations and then are allowed a way out if only they kill someone. Where Whannell and Wan misstep is by trying to make this a morality flick. All of the victims are lacking in morals of some kind and do not appreciate the good things they have in their lives. Or as the bad guy says; he is, "Sick of people who don't appreciate their blessings." So the moral of Saw is to appreciate what you have in your life because you never know when some psycho might abduct you and force you to kill someone?