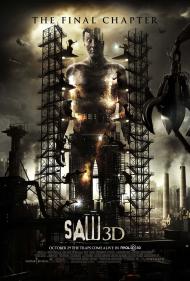 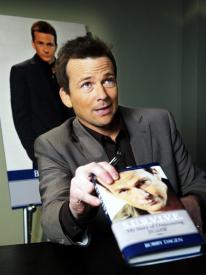 I have only seen the very first Saw film.  Watching this one, I easily learned several things missed from the many films in between.  Jigsaw is now dead.  He was married to a hot blonde.  He had an assistant.

That assistant, Hoffman, is still up to Jigsaw's games of torture.  He is also after Jigsaw's wife, because she turned him in to the police.  Meanwhile, Bobby a pretend former Jigsaw survivor, has written a book about how he supposedly survived a Jigsaw trap.  His lies got the attention of Jigsaw and Hoffman, and he soon finds himself in a real life or death situation.

I am not a big horror fan, but it was my teenagers turn to pick the movie.  The opening scene sets the tone for the film.  Three young people are all strapped together with table saws running in front of them.  One of them has to die for the others to live.  It is one of the grossest death scenes in the film.  As this is in 3D, flesh flies at the screen more than once.  I nearly threw up my nachos.

The film makers went to great expense to kill people in many different ways.  Almost all are very cruel and in blood soaked gore.  Most traps are so elaborate as to be ridiculous.  It would have taken months to plan, design and build these things, let alone execute to the point that they are in the movie.  No one person could have done them.  But hey, this is a fantasy.  A sick as hell fantasy, to be more precise.  If you like watching this kind of crap, then this is the shit for you.

Thankfully the film makes several references to the first film.  This made it seem much more cohesive to me, since I have limited knowledge of all that has gone on since.  I liked that Cary Elwes reprised his role from the first film.  His part  bookends the series well, if this is in fact the final film in the dragged out  franchise.