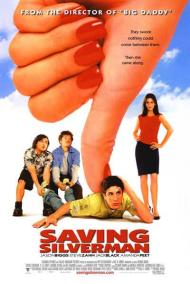 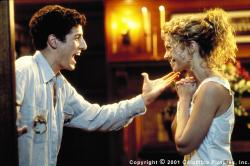 I have spent many hours showing my sons movies that I like and movies that I think they will like, but now my oldest son has recommended a movie for me. A week after he watched Saving Silverman on television, and told me about it, we stumbled upon the DVD on sale at Menard's, of all places. We watched it together and I liked it. Maybe it helped that I was watching and laughing with my son but I would still recommend this movie.

Wayne, J. D. And Darren have been best friends since school. Their friendship is bonded by the love for Neil Diamond. When not working their real jobs they don big dark wigs, put on sequined shirts and sing Neil Diamond songs in public. After one such gig Darren meets and falls for Judith. They quickly become a couple and the singing trio is soon in jeopardy.

Darren's old highschool flame, Sandy, comes back in town and the guys decide to set them up and kidnap Judith. Of course they are incompetent, and by the time it is all said and done Judith has convinced J.D. that he is gay and Wayne has fallen in love with her. Meanwhile, Sandy is going to become a nun and Wayne and J.D.'s old highschool football coach moves in with them after getting out of prison for killing a referee. But not to worry, Neil Diamond, who has been referenced countless times in the film, shows up to straighten everything out. Actually they kidnap him as well, but he is the only one who seems to have a level head.

We laughed throughout this movie. The only weakness is the character of Darren. Why am I rooting for such a spineless wuss? But he has to be that weak for the plot to work. My favorite moment is when Judith and J.D. discuss him being gay. My son's favorite scene is when Judith and Wayne run romantically to each other at the wedding. It's not what you think. While I am at it, I like Neil Diamond songs. I was singing along to the soundtrack. I hope my son recommends some more movies for me.