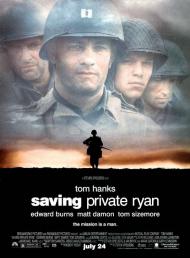 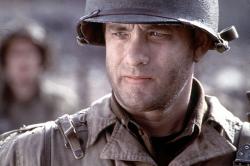 Saving Private Ryan is a heartfelt salute to all that have served in the armed forces during World War II. After watching this movie, I wanted to hug a veteran. What do we, as civilians, know of sacrifice, when things like what happened in this film, actually occurred?

It opens with the landing on June 6th, 1944, D-Day. Tom Hanks leads a group of men out of a landing craft and for most of them, to their death.  The first 20 minutes of the D-Day landing is a grotesque piece of art. You want to look away from the carnage but you are too shocked and awed to turn your head.  After watching one soldier after another die in grotesquely explicit manners, the survivors gather at a semi-safe spot on the beach.  This gives the audience an extremely brief moment to catch their breath.  The soldier still need to knock out the guns and the Germans hidden in the pill boxes.  More soldiers die as the main characters of the film slowly become established.

Finally, the beach is secured and the allies have opened the door to Europe.  These men have all come through one of the largest battles the world has ever known, but the movie is about to become very personal.   In a lonely country home, a mother learns that all but one of her sons have died in the war.  Hanks is assigned to gather some men and find her surviving son, Ryan, and have him sent stateside.

The movie becomes a question of morality.  Does the sacrifices of the many equal the salvation of the one?  Hanks and his men cross France in search of Ryan.  They experience fire fights and several of their own die along the way.

One of the scenes that always bothers me is when Hanks decides to have his men storm a hill and take out some Germans.  They could have easily gone around it and not have bothered.  He instead decides they should do so as to protect any other allied troops that may come that way.  It is a decision that ends the life of one of his men, but it demonstrates what a leader does.  They make decisions and hope to God it is the correct one.   How many of us could actually do that job?

The cast does some great work and each have a moment you will remember.  Often it is the scene of their death.  The hardest scene for me to watch is when the German slowly stabs Adam Goldberg's character.  I literally turn my head when that scene comes on.   When Jeremy Davies descends the stairs he looks like a wounded angel having just saw Hell.

Tom Hanks does an incredible job, of course. His performance is moving and extremely heartfelt.  He tries hard to be an enigma to his men, but he slowly becomes a very real person as the film goes along. The scene where he talks to Matt Damon about his wife is particularly strong.

Matt Damon however is not on his A game.  He seems uncomfortable through most of his scenes.  The one and only one time that Damon actually appears natural is when he is talking about his brothers.   The story comes out of him as if it were real and his own reaction to recounting it is a humorous little tribute to his dead brothers.

I have always found myself attracted to World War II films.  Saving Private Ryan is one of the best ever made about the subject.  Spielberg gets a bit manipulative at the grave site, but then again, emotional manipulation is what he does best.  It worked on me.  Have you thanked a veteran lately? 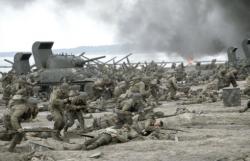 The invasion of Normandy in Saving Private Ryan.

Saving Private Ryan is for the most part a well made sentimental movie about W.W.II. The actors, led by a very likable Tom Hanks, do a fine job of interpreting their roles. Big stars appear in cameos against the war torn cyber background as Steven Spielberg does his utmost to convince us that this film is as important as Schindler's List. He almost pulls it off, at least for the first 45 minutes, about which enough has been written. Here you're not simply watching a movie you're storming Normandy.

The plot is simple, a squadron of soldiers must risk their lives in the French countryside in order to find Private Ryan. The only surviving son of a woman who has just seen his 3 brothers killed in action.

One by one, we are introduced to these men as they battle through the hell of modern warfare. By far the most enjoyable section of the movie is the quest for Ryan. Once he is found this becomes a stereotypical war movie where of course the key bridge is saved just in the nick of time.

And what the hell was Spielberg thinking with those ridiculously sappy prologue and epilogue scenes at the veterans cemetery?

All in all a remarkable and yet very uneven film.

At 2 hours and 42 minutes, this movie is inexcusably long. In between the opening and closing battles - which, as good as they are, are too long on their own - there is an awful lot of talking that could have been trimmed. The very first thing that should have been cut though is the god awful prologue and epilogue with the elderly Private Ryan. These scenes are so over-the-top that their mere inclusion alone is enough to make me whack off half-a-star from my rating. The only way I even got through this movie was to stop half way through and come back later to it.

I'm not surprised you love this movie Eric. It's the most gung-ho patriotic, right wing war movie since John Wayne's Green Berets.  The only liberal character in the film who dares to question the morality of some of the character's actions is shown to be a coward, whose bleeding heart treatment of the enemy causes the death of several American soldiers. Despite the name of the army who invaded Normandy being the Allies, only American soldiers are shown. The only non-American to even get a mention is English Field Marshall Montgomery and only in passing and as an insult. The sniper is even shown to pray as he kills the enemy because even God was on the side of the Americans in WWII.

There's certainly no denying that the opening battle scene is one of the most horrific ever put on film. It's probably the most violent, bloody and just plain aggressive battle scenes of all time.  You fight for every inch of beach right along with Captain Miller. You'll feel a genuine sensation of relief when he makes it through the battle. It's also the movie's strongest sequence. Everything that comes after it is a bit of a let down.

As good as that opening battle scene is however, it's completely superfluous to the actual plot, which doesn't get going until it's over. In terms of the story, you could be shown some of the battle over the credits and then start with the news that Private Ryan's three brothers have died. Of course then you wouldn't have the two battle scenes to bookend the film that way, but we would get to the plot much faster.

In between those two battle scenes the plot becomes a trek across France where we meet every GI cliche ever put into a war movie. The dialogue fails to scintillate and only Tom Hanks and his irresistible likability manage to really make an impression.

The final battle scene is as well filmed as the first, but unfortunately it makes absolutely no sense. Captain Miller and his crew are trying to hold a bridge. They have only a small force to stop a much larger one. Their plan is to try and force the Germans down a certain road where they hope to destroy a tank so that it will block the advance of the rest of the army. It's a plan that fails horribly. Now I'm no military tactician, but why in god's name didn't Captain Miller and his group wait on the opposite side of the bridge? The Germans would have had to cross the bridge, which is only wide enough to go single file. Why didn't they try to disable a tank once it got on the bridge? With the bridge blocked, how would the rest of the Germans have gotten across? And, with the bridge wired to explode, they could have as a last resort, blown up the bridge to stop the Germans from advancing. Instead, they are completely decimated and only when it's too late, do they think to blow up the bridge.

Even after being bored for two hours by listening to some GIs I never really cared about as individuals and being numbed by countless scenes of bloody carnage, I have to confess that when Captain Miller tells Ryan to, "Earn this", I was actually moved. When Hanks says it, I couldn't help but think that he was speaking to Matt Damon, but talking to every American and European whose life was made better by the sacrifice of those soldiers who gave their lives.  He's telling all of us to make sure that those men didn't die in vain.

Sadly though, we then cut to that damn final scene in the graveyard where an old Ryan has a pathetically melodramatic moment with his wife. Spielberg just doesn't know when to quit. He takes the most genuine moment in the entire movie - the one that comes closest to making the whole journey worth it - and then beats it to death.

I agree with you Patrick.  This is a very uneven movie.