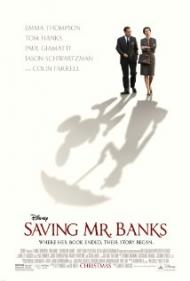 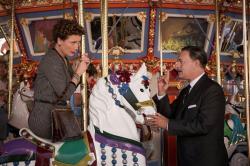 A 2002 Australian documentary on author P. L. Travers entitled The Shadow of “Mary Poppins” led to a film deal that eventually caught the attention of BBC Films. After a script was completed it became immediately apparent that they couldn't proceed without first obtaining permission from the Walt Disney Company for certain intellectual property rights involving songs and images from the movie Mary Poppins. In 2011 the head of Walt Disney Studios learned of the script's existence, and the fact that it portrayed Walt Disney, the man, as one of its principal characters. They had three choices at the time. They could purchase the rights and shut the production down, they could place the film in turnaround, or they could co-produce it themselves. The suits at Disney chose the third option. They cast Tom Hanks as Walt and Emma Thompson to play Travers (Meryl Streep was unavailable), and so after a decade of development Saving Mr. Banks finally came to fruition.

It tells two stories simultaneously. The main story centers on Travers' 1961 trip to Hollywood to work out a deal for the movie rights to her beloved children's book character, Mary Poppins. Walt Disney had long coveted the rights to the character and had promised his young daughters he would make a motion picture starring the whimsical, but no nonsense, flying nanny. Travers is shown as a disagreeable snob who has nothing but disdain for Hollywood, Walt Disney and America in general.

These scenes are interspersed with clips from Travers' childhood in rural Australia. We are given insight into what made her the woman she became. Her father was an alcoholic dreamer and her mother prone to fits of depression. An Aunt who came to stay with the family served as the inspiration for Mary Poppins herself. Unfortunately these scenes drag a bit and we could have learned just as much about her past, and its emotionally devastating affect on her life, in half the screen time. But then I guess they had to justify hiring a star of Colin Farrell's stature for what would otherwise have been a very small part.

The scenes at the Disney studios in 1961 are quite lighthearted compared to the more heavy-handed flashbacks. The squaring off between Travers and Disney offers some amusing moments, as do the scenes with Travers expressing revulsion for every idea the studio comes up with. I don't know that much about the real P. L. Travers but from what little I've read about her it seems they softened her up quite a bit for this movie version. I cannot imagine the real woman having the same emotional reaction to the finished film that she is shown having at the premiere in this movie.

Tom Hanks brings Uncle Walt to life without making him a caricature. He is shown as an ambitious dreamer with a bad smoking habit (although the studio refused to allow Hanks to smoke on camera). The only concession Hanks got was being shown stubbing out a cigarette in one scene, and he coughs frequently throughout the movie. Although his is the smaller role the best scenes are those between Disney and Travers. It turns out these two iconoclasts have more in common than either of them initially suspected.

Saving Mr. Banks features many humorous moments but it's permeated with a sense of sadness. There is a melancholy atmosphere hanging over the entire film. The movie's leisurely pace adds to this sense of wistful loss; still the emotional payoff is worth the patience it takes to get there. A wonderful cast helps the story along and clips of the original Disney movie will make you want to watch Mary Poppins again. Saving Mr. Banks, while nowhere near as memorable as the movie that inspired it, is nonetheless an entertaining and moving motion picture. 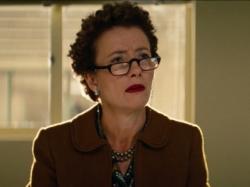 As with most movies that are based on a true story, Saving Mr. Banks plays with that truth a little. The biggest deviation from fact in the script is that Mrs. Travers had yet to sign over the rights to Disney when production began and only did so when Disney had touched her emotionally. In reality, documents were already signed and the only reasons for selling Disney the rights were financial ones. Also, after seeing a recent BBC documentary about P.L. Travers and doing some reading about her, like Patrick I find it difficult to believe that she cried with emotion at the premiere. Given her often stated opinion about the film, she may have cried when seeing the finished film, but it wouldn't have been because of how touched she was.

If Mrs. Travers were still alive today, I doubt she would enjoy this adaptation very much either. It wears its sentiment on its sleeve and works very hard to evoke an emotion from its audience. It borders on melodrama at times, not only in the flashback scenes, but quite often in the present as well, such as when Paul Giamatti starts talking about his wheelchair bound daughter. There's nothing subtle about anything in this film.

I agree with Patrick that the scenes in the past are longer than necessary. We get the point quite quickly that Mrs. Travers' father was a drunk and her mother a depressive, while the inspiration for Poppins was her aunt. These scenes are finely filmed and acted, we just don't need so many of them. We learn about Disney's past in one scene simply by having Hanks deliver a monologue, without showing lengthy flashbacks, where if Mrs. Travers had told the same story, we would have been shown 20 minutes of Colin Farrell looking pale and tipsy.

The scenes in the 1960s are much more entertaining. Mrs. Travers really did insist on having the writing sessions recorded and these scenes are based on those recordings. She really did detest the songs and also insisted upon no animation. She also at one point demanded the color red not be used, although there's no evidence that it was because she hated the color because it reminded her of the blood her father coughed up when he was dying. The proper English grammarian in her also prompted her to complain about the song title, "Let's Go Fly a Kite." Asking for it to be changed to the more proper, "Let's Go and Fly a Kite". One complaint of her's that was left out of the film was the fact that she objected to Julie Andrews being cast as Mary Poppins. She thought Andrews was too attractive for the part because her Mary Poppins was quite plain.

It is the moments when Walt and Mrs. Travers square off that the movie really shines. His brash and outgoing American personality contrasts sharply with her buttoned up, repressed Englishness (despite being born Australian, she was very English in personality). Hanks and Thompson both go a long way to overcoming the script's sledgehammer subtlety.

Like Patrick, I was entertained by this movie, but I certainly wasn't blown away by it.

According to Saving Mr. Banks, we are all the sums of our upbringing. We are the product of our family’s creation. We can benefit from its blessings or be cursed by its failings. Walt Disney was motivated to success by his poor past while P.L. Traverse was haunted by her father’s death.

That does not however, excuse this lesbian’s poor behavior. Patrick wrote that he could not imagine the real Traverse having the reaction to the finished film that she is shown having here. According to Wikipedia, she did not. She approached Disney at the premiere and told him that the animated sequence had to go. Disney supposedly walked away as he responded, "Pamela, the ship has sailed." When she gave permission for the play version to be made years later, she stipulated that it would not have anyone from the movie involved in it.

I get that this film is about how childhood events can affect our adult life but it needed not be so lengthy. It almost seems like filler. She loved him. We get it. He was a drunk. We get it. He died while she was young. We get it. What I do not know is how Dick Van Dyke responded to Traverse stating that Lawrence Olivier is one of the great ones while he is not.