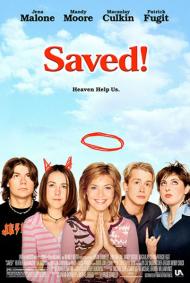 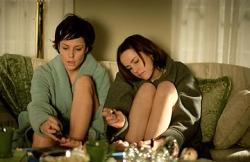 I couldn't help but think of my brother and fellow critic Eric as I watched the comedy Saved. A common theme in his reviews and editorials is the liberalism of Hollywood and its one-sided view of the world. With this movie I could see his point.

Saved tells the story of Mary, a student at a Christian High School, who has sex with her boyfriend after he confesses to her that he is gay. She does this in an attempt to 'save his soul'. The only result of this action is that she winds up pregnant. As she tries to hide her secret, she finds herself becoming friends with the School's outcasts, who are the only ones who are able to accept her without passing judgment. Eventually of course, her secret comes out and Mary is forced to make up her mind about what she believes in.

Mandy Moore plays the Christian snob of the school who likes to lord it over everyone around her. She uses her beliefs to bolster her feeling of superiority over everyone who doesn't match up to her own high standards. Moore is superb in the role, getting some of the films most wickedly funny moments. She has a memorable scene at the gun range where she is a part of a Christian Gun Club whose motto is "An eye for an eye."

Where I feel Eric's opinion about Hollywood comes into this movie is in the way that all Christians are portrayed as hypocrites. Not one of them lives up to their beliefs. Whereas all of the liberal characters are the kind hearted, misunderstood heroes. It would have been stronger if both sides of the story were painted a little more evenly. If it was a straight out, totally silly comedy, it wouldn't have bothered me so much, but this movie is smarter than that. It's also trying to make you think about beliefs and what or whom we put our faith in, and for that to work you really need to show the good and the bad of both sides. Too often, it hits you over the head with its message.

Not that all this doesn't make for a funny movie. The likable cast and a witty script keep things entertaining and well paced. It is also filled with a great set of supporting characters. Pastor Skip, the principal of the school plays the hip minister, who tries to 'get down' with the students and show them that Jesus is 'the man', but who turns out to be having an affair with Mary's mom. Eva Amurri is also quite good as Cassandra, the rebellious lone Jew attending the school, whose mere presence irritates Moore's Hilary Faye. And Valerie Bertinelli gets in a humorous, if brief cameo, spoofing her own made for television roles.

Saved is a good and funny movie. If it had only used a sharpened sword rather than a sledgehammer to get its points across, it would have been a great one. 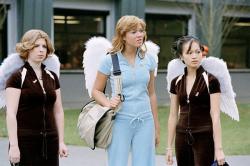 Yes, when Eric reviews this movie he will have a field day with the completely one-sided point of view this movie takes. The Christians are all hypocrites and everyone else is a good person. Still, the movie does not take a shot at Christianity per se, but rather at those hypocritical so-called Christians who sit in judgment on others while being guilty of sins themselves.

Only in the character of Mary is there some balance, she recognizes the hypocrisy of her self righteous Christian friends and teachers but maintains a true Christian spirit in herself. Like when she tells Pastor Skip, "So everything that doesn't fit into some stupid idea of what you think God wants you just try to hide or fix or get rid of? It's just all too much to live up to. No one fits in one hundred percent of the time, not even you."

This movie does have some very funny lines. When Mary is spotted going downtown to Planned Parenthood by Roland and Cassandra they have this exchange. Cassandra: "There's only one reason Christian girls comes down to the Planned Parenthood." Roland: "She's planting a pipe bomb?" Cassandra: "Okay, two reasons." When word gets out that Mary's boyfriend is gay one of the Christian students tells Mary, "Sorry about Dean's faggotry."

Saved! begins strong but really seems to run out of gas midway. And the ending is so hopelessly over-the-top and feel good that it takes away from the sharp satire that it promises at the start. Still the cast is good and the movie does entertain, it's sort of a Christian version of Mean Girls. 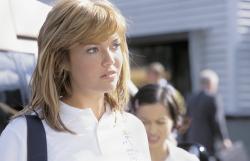 Judgement is not a bad thing. We all judge people all of the time, every day. It is an inert defense built into the human psyche. However, liberals blindly think that this is an exclusive conservative Christian flaw. Scott wrote that the outcasts of the school do not pass judgement as Hilary Fay does. Hello! Cassandra spends the entire movie judging Hilary and everyone else's Christian motives. She out right makes fun of their prayer session. Everyone judges other people. If we didn't judge people then I guess pedophiles should be allowed to work at day cares. We wouldn't want to judge someone just because they molest children now would we? Again, we all judge people and it is not a bad thing. Just because someone else does not agree with you does not mean they are being anymore judgmental than you. Liberals judge as much as conservatives yet conservative do not go around calling liberals on this fact because we understand it to be part of our human condition not any one political party.

Anyway. Saved is actually not as offensive to Christians as it first seems. The movie starts with plenty of jokes about Christian's life styles. Everyone constantly praises Jesus and thanks God for everything. By the end of the movie we see that these characters, for the most part, still have their religious beliefs intact but they are a bit tired of trying to live up to a standard that they feel they must live up to.

Hilary is my favorite character. Sure she is domineering as hell but she is the one character that knows the most and learns the most. She lives a life that she has been told to live. She takes care of her brother and intervenes when Pastor Skip asks. She eventually crumbles under all of her self imposed pressure. Her most telling line is, “The Christian thing to do? I have been doing the CHRISTIAN THING my whole life! I did not have sex with a gay and try to blame it on Jesus!"

Mary is a follower who eventually becomes her own person. It is not until then end of the movie that Mary finally smartens up and asks the right question. “Why would God make us all so different if he wanted us to be the same?"

Where as Scott is right that this movie does not portray Christians as being consistent in life as they are in their beliefs, it does show Christians and everyone else as being humans who are responsible for their actions. As Patrick says to Mary, “I like you, Mary. I do. God gave us free will, and that day at Hilary Faye's, you weren't afraid to use it. You inspired me. You amaze me, Mary." People being responsible for their own actions? Wow! What a great conservative message hidden inside this film that pokes fun of Christians.