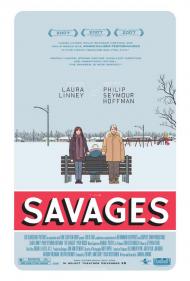 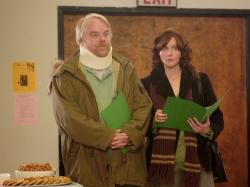 Philip Seymour Hoffman and Laura Linney in The Savages.

The Savages is a brilliantly acted but ultimately disappointing film. Philip Seymour Hoffman and Laura Linney play siblings Jon and Wendy Savage, both aspiring writers and both long estranged from their parents. The onset of their father’s dementia brings them together to decide how best to care for him.

We meet these two middle-aged, unhappy people with leftover childhood issues. In taking care of a father they don’t either know or love, they come to terms with their past. Wendy and Jon (like the children in "Peter Pan") finally grow up. The problem here, that even the wonderful acting can’t overcome, is a script that never really tells us who these people are or who their father was. Their mother is only briefly mentioned, "She just wasn't any good at being a mother." (this is far more vague than cryptic) and father was abusive. A few more details would have helped. Clearly writer/director Tamara Jenkins wanted us to color in the blanks but the story just wasn't compelling enough to make me want to put in the effort.

The tone of the story is also a bit awkward. For the most part it is a realistic slice-of-life drama but there are occasional overt attempts at humor which suddenly remind you that this is a movie. The scene, which is shown in the trailer, where Wendy and Jon attend a support group meeting at the nursing home is one example. The humor in this scene is contrived and obvious.

There are, however, some moments of great drama and the subject matter is handled well. Hoffman gets to let loose with of couple of raging speeches that bring the movie to life and Linney is simply one of the most talented actresses in the business. They are a joy to watch ply their craft and that alone is worth the price of admission. But in the final analysis this one has been over-praised.

Laura Linney and Philip Seymour Hoffman in The Savages.

Jenkins had two of the greatest actors working in her film but she kept slowing the movie down with filler. How many scenes feature one of the actors looking out a car window or just doing something without any dialogue? This is a two character play, and this movie really works best when those two characters interact.

Jenkins sets up many scenes that seem quite true to life. One of my favorite parts is when Wendy pulls out a card for Jon to sign, just before they see their father's dead girlfriend's family. She wants to read the card to Jon, who just grabs it and signs it. My wife constantly has me read every card before she buys them, even though I never care what any of them say. Another good scene has Wendy help her father go to the bathroom on a plane. How many of us have been embarrassed by a relative? I have a story about my over weight mother and a beach chair, but I am too embarrassed to go into detail.

Not all of the scenes work. At one point, Wendy and Jon show a silent film for their father, at his nursing home. Many people are watching it with them and the silent movie has a scene of a white actor getting dressed in black makeup. Wendy and Jon look uncomfortable as they notice that black audience members are bothered by the scene. The whole set up seems forced. It is as if Jenkins is trying to make some point about how attitudes have changed over the years. It is an insult to black people that Jenkins thinks they could not see the silent film for what it was, and not be bothered by it.

Although Jenkins could use some seasoning as a film maker, Linney and Hoffman are simply the Hepburn and Tracy of their time. Wendy and Jon are truly boring characters. However, Linney and Hoffman understand the nuances that give these characters life. Just their mannerisms and vocal expressions give these two lonely people personalities that would not exist in the hands of lesser actors.