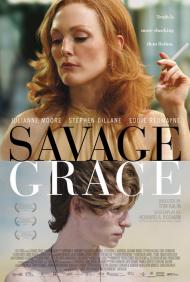 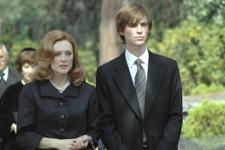 Julianne Moore and Eddie Redmayne. No mother and son should be this close.

I had no idea what this movie was about before watching it. It is not often that I am shocked by something I see onscreen, but I have to admit that Savage Grace did. But then the subject matter of mother/son incest is rarely tackled in movies. Based on a true story it definitely lives up to its tagline.

This is the story of the beautiful social climbing Barbara Baekeland, her husband Brooks, heir to the Bakelite plastics fortune, and their sensitive and intelligent son Tony. The world was shocked on November 17th, 1972 when Tony stabbed his mother to death, called the police, and then ordered some Chinese food. When the authorities arrived he was found calmly eating his fried rice. The full extent of their relationship was later revealed.

Despite such salacious subject matter, director Tom Kalin treats his characters with dignity and honesty. He allows their actions to speak for themselves. The story is told through a series of days, each taking place in a different year and city. It begins in the 1940’s with the birth of Tony. We see him grow up and his parents grow apart against a romantic background of wealthy European locations.

The Baekeland’s just might be the most dysfunctional family ever. At one point Tony, who is clearly sexually attracted to men, has sex with a girl. Later his father leaves his mother for this same girl. Then Tony sleeps with his mom’s gay, or rather bi, confidant. Later Barbara has sex with this same guy and then, why not, the three of them have a go. Finally it is Barbara’s very aggressive sex with her son that pushes him over the edge. This is the scene that shocked me.

Julianne Moore is one hell of a gutsy actress. She is wonderful in this part. She is beautiful and stylish but with an obvious coarseness beneath her elegant veneer. Stephen Dillane is good as the estranged husband Brooks. A part that Kevin Kline would have been perfect for 10 or 15 years ago. Eddie Redmayne is quite impressive. He holds his own with Moore in some very intense scenes.

This very well made movie is like watching a train wreck in slow motion. It’s horrifying but at the same time fascinating. 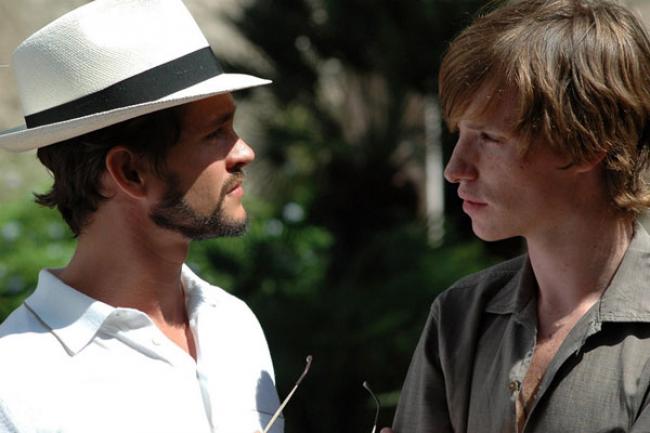 Although I agree that Tom Kalin portrayed his characters in an honest and blunt way, I never felt any connection to this family. This movie implies that Barbara married Brooks for money and he married her for her looks. Never in this film does it suggest that there is any romantic feelings between them. As soon as they had a child, they seemed to no longer have much interest in each other. She wanted to hobnob with royalty and all the right (rich) people, while he was more interested in his hobbies.

This family is often shown living all around the world, implying that this never allowed Tony to make any real friends.Thus, his mother became his most frequent companion, while his father is portrayed as someone very emotionally distant and a bit afraid of Barbara. Later, he left Barbara and literally ignored and hid from his own son. Tony is a homosexual but I do not think he had sex with Bianca. For a film that is not scared to show sexual acts, we are never shown anything but a nervous kiss between Tony and Bianca. Later, when Barbara confronts Brooks and Bianca, she asks them how they think Tony is taking their relationship. Bianca responds that Tony does not care, implying that she is fully aware that Tony is gay and that perhaps that kiss was as far as things got. If we are to believe they consummated their relationship, Kalin would have shown it.

No doubt, being gay was a struggle for Tony, considering when this film took place. However, I never felt any pity for him. He is shown living a life of complete and utter leisure in all sorts of wonderful locations. His sexuality is never shown to be an inconvenience for him. When an adult, all we see is him hanging out by the sea shore with his gay lover, smoking pot and having sex. He is never shown having any sort of responsibility, other than an obligation to his manipulative mother, and that is the film's problem.

I should have come away from this film feeling some serious pity for Tony but I did not. His father abandons him while his mother turns him into her lover. This guy was abused as well as neglected by the two most important people in his life yet this story never encourages the audience to get behind the horribly wounded Tony. I blame the director. Look at the scene where Tony leaves letters in his father's garden for him to find. We are shown Brooks looking scared as he hides behind a curtain, hoping Tony does not see him. What we should have seen instead, was how this act was affecting Tony. We needed to see Tony's anquish over his father's abandonment. We needed a moment or two of Redmayne acting hurt. Instead, Kalin shows us lots of little pointless scenes such as Redmayne smoking or Moore painting and there was no reason, what-so-ever, for Stephen Dillane's full frontal nude scene at the gym. The story would have been better served with more scenes of Redmayne showing us Tony's reaction to his torment.

Perhaps it was that Kalin did not want us to empathize with a killer but Tony is the center of this story and some better understanding of him would have helped. This guy was caught up in his parents screwed up relationship and it obviously had some very harsh affects on him. If Kalin had shown us a more rounded Tony, he may have become more real and thus more sympathetic. The only emotion Redmayne ever seems to demonstrate here is sullen.

The subject matter of Savage Grace is taboo and Kalin seemed distracted by it. The sex acts may be shocking but it is the actors reactions to them that are far more important. Let me put it this way. John Cena does not sell his five knuckle shuffle punch, the person pretending to receive it does. The act is showy but the persons response cues the audience into what affect it had on them. There is a deep, dark psychological tale to be told about this family but this movie only scratched the surface.