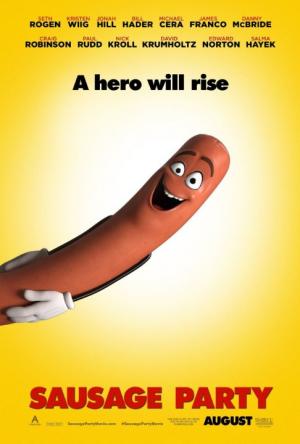 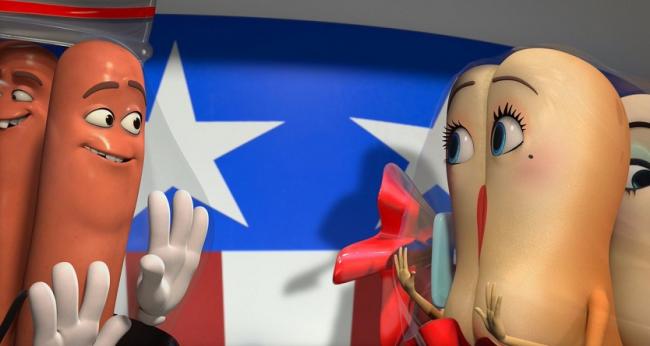 A wiener wanting to be inside a bun, in Sausage Party

Sausage Party is rated "R" by the Motion Picture Association of America for "strong crude sexual content, pervasive language, and drug use." I cannot stress enough that this animated film is by no means intended for children. Let me start with this early scene where some packaged hotdogs are flirting with a package of buns. All wieners are boys and all buns are girls. Hotdog, "Look at these big ol' buns, waiting to get filled with my meat." Bun, "Yeah, right Carl. Who in this package would ever let Carl get up in them?" One bun raises her hand, "Roberta, put your fucking hand down. You're ruining my joke."

One hot dog, Frank, is in love with a bun named Brenda. Their fondest wish is to be taken by the same God from the store and into the great beyond. The food at the grocery store see all customers as deities and being taken away by them as the ultimate goal. One day their dream comes true but a mishaps in the woman's cart leaves them both on the floor scurrying for their lives. The food that made it to the customer's home quickly learn of their horrible fate. One dog survives and tries to make it back to the store to warn the others. On the way he runs into an obviously used condom on the street who complains of being stretched.

Meanwhile, Frank starts to think everything is not as they believe after a jar of honey mustard, that was returned to the store, commits suicide. Frank and Brenda meet up with a Jewish bagel and a Muslim flatbread, who are constantly arguing over shelf space like it was the Gaza Strip. The film touches on politics and religion in some clever ways. A small mustached jar of German mustard calls for the extermination of all the juice. Frank seeks advice from a bottle of alcohol called Firewater. He is an American Indian who is still upset that the booze aisle was turned into the cracker aisle. I found some of this to be witty but all the box of grits does is complain about the crackers as well.

Frank and Brenda are being pursued by a douche, literally. He wants revenge like nobodies business, and as he is designed to go inside an orifice, we know it is only a matter of time before that happens. Whenever he needs to rebuild his strength, he sucks the juice out of something. Of course, this if done by getting between the products legs. Frank and Brenda also get help from a lesbian taco, who has the hots for Brenda. The film ends with all the food in the store having a sex orgy. At one point, Brenda is in a state of sexual bliss, thinking Frank is making her feel good. He tells her it is not him as he is standing next to her with bagel and wrap jacking off watching the taco performs oral sex on Brenda.

Sausage Party is a parody of all of those cartoons of talking animals and animated objects. It is often hilarious and clever but those moments are sometimes a bit clouded by the crudeness of it all. I laughed, I groaned and was sometimes shocked. This adult cartoon, with plenty of adult wit, is one of the best comedies of the year. 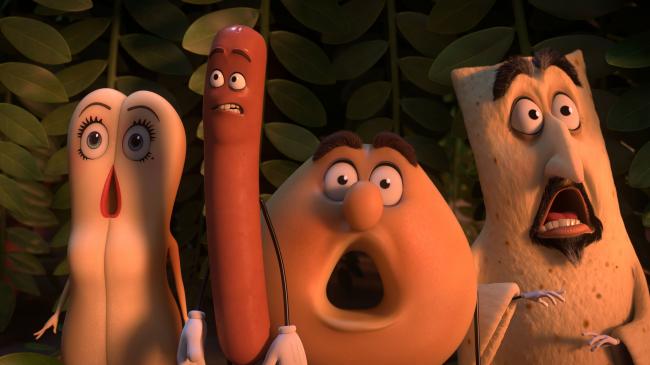 All of Seth Rogen's films seem as though he thought of them while stoned. The story idea for this one is credited to Rogen and his frequent collaborators Jonah Hill and Evan Goldberg and it's easy to imagine them sitting around while high imagining what it would be like if their food had personalities. Apparently they conceived of this idea years ago, but it took a long time to get a studio on board to provide financing for a cartoon this raunchy. The result however, is as funny as Eric has said and looks to be a box office hit, especially considering its relatively cheap budget of just $20 million.

One of the problems I've often had with Rogen's films is the amount of ad-libbing in them. These scenes are never as funny as the actors seem to think they are and generally just add unnecessarily to the running time. The nature of animation prevents this from happening. If the actors say it, the animators have to animate it, so this limits the freedom to improvise. This means that the film clocks in at just 90 minutes, which is about all the time it can sustain. As with all comedies that rely on shock to provoke laughs, the longer they run, the less funny they become as the filmmakers must continue to outdo themselves, going further and further over the top. And after the final orgy scene that Eric mentioned, there's really nowhere left for the writers to go. It's hard to imagine an animated scene that could comically shock more.

Although, as Eric mentioned, the film does say something about religion and even comments on the Arabic/Israeli conflict, those moments are fleeting and shallow, although quite funny. Nothing is subtle or incisive. The jokes are aimed at the teenager inside all of us. The humor is almost all related to sex or ethnic stereotypes and is very un-PC, which just makes it all the funnier. As Eric said, it's all a sort of twisted version of a Pixar cartoon, although there are a few shoutouts to other film genres, such as the very funny scene when the shopping cart is banged, creating a scene straight out of a war film with all the subsequent carnage on full display, and surely the Bickle's brand honey mustard character is a shout-out to Taxi Driver.

Like Eric, I laughed and sometimes groaned. It's all very crude and I can only imagine that multiple viewings would diminish the humor as the shock wears thin, but it's definitely one of the funniest films of the year so far.