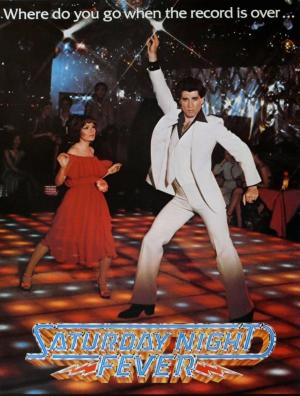 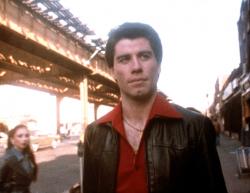 Saturday Night Fever is more than just a relic from the disco era. Sure it stands as one of the most indelible cinematic time capsules of the 1970s (check out the posters on Tony’s bedroom wall). But to judge it merely by the image of John Travolta in that white, polyester, bell-bottomed suit and black shirt, with the butterfly collar open halfway to his navel, doing that finger-pointing-to-the-ceiling dance move, on those lighted multicolored squares, is to sell it short.

Yes, Saturday Night Fever spawned the entire disco craze. It has one of the most famous, best selling soundtracks of all time, filled with classic songs like “Staying Alive”, “Night Fever” and “If I Can’t Have You”. But this movie also features a decent script and fine performances. In fact John Travolta was Oscar nominated.

Travolta plays Tony Manero. He’s 19 and lives with his very Italian family in Bay Ridge, Brooklyn in the shadow of the Verrazano Narrows Bridge. During the week Tony works at a paint store but he lives for Saturday night where he reigns as king of the dance floor at the local discotheque. One Saturday he sees a woman dancing and likes her moves. Eventually they team up for the big dance contest and begin a tentative relationship.

Karen Lynn Gorney plays Stephanie. Like Tony she grew up in Brooklyn but has crossed the Brooklyn Bridge into Manhattan where she works in an office. Stephanie has big dreams and they don’t include getting romantically involved with a kid that’s going nowhere. She acts more sophisticated than she really is and is constantly namedropping the famous people she meets at work.

Tony is the leader of a gang made up of his childhood buddies. The dramatic climax of the story involves the meekest member of the gang who got his very Catholic girlfriend pregnant and doesn’t know what to do about it. There is a subplot dealing with Tony’s brother. He’s a priest but decides to leave the church.

The scenes of Tony at home provide a few laughs. A lot of hitting each other upside the head goes on at the family dinner table. “Would ya just watch the hair. Ya know, I work on my hair a long time and you hit it. He hits my hair.” Tony’s mother keeps a picture of her priest son over the mantle and makes the sign of the cross whenever she passes it or mentions her son’s name. Tony argues with his pop and cannot compete with his brother in his mother’s eyes.

The dance scenes are justly famous. Disco dancing took the ballroom style and loosened it up by adding a more rhythmic beat and a blatant sensuality to it. Travolta’s big solo dance to “You Should Be Dancing” is a show stopping moment. Wisely it was shot like an old fashioned Hollywood dance number with a limited amount of cuts and Travolta’s entire body is on display throughout.

This movie precedes political correctness. Tony and his friends harass a couple of gay guys and they complain when the music at the club gets too “ethnic”. By the end of the movie Tony has matured as a person and you get the sense that by the time he rides in that graffiti stained subway car, while the Bee Gees “How Deep is Your Love” plays, he is ready to take that next step in life. 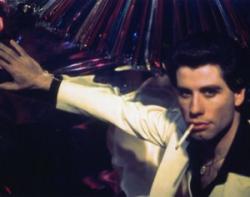 Although Patrick wrote that Saturday Night Fever is more than just a 1970's relic, that is what it is most remembered as.  The music, the polyester clothes and that Farrah Fawcett poster cement this film as a 1970's time capsule.  Where it seems timeless is that the cast of "The Jersey Shore" could appear in this film and not standout in the least.

Tony is nineteen.  He is at that most pivotal moment in a man's life.  What he does in the next five years or so is going to determine much of the rest of his life.  Other than dancing, Tony is not sure what he wants.  Although he loves his friends, they are holding him back.  They complain about how life is working against them, while none make an effort to get ahead.

The dancing scenes are the movie's most memorable scenes.  I am not sure why, but I laughed out loud when Pescow and Travolta started dancing to "Disco Inferno."   I have watched musicals from every decade and have seen countless dance styles, but for some reason that scene was hilarious to me.

Not all the dancing garnered that reaction from me.  It was like watching "Dancing With the Stars" when Travolta dances with Gorney to "More Than a Woman."  John Travolta was the epitome of cool here.  His solo dance number is completely dated but ultimately iconic. Patrick wrote that it would be selling Saturday Night Fever short to judge it simply on the image of Travolta dancing, but without those scenes this movie would not have been at all remembered.

This movie and it's soundtrack were so popular that a back lash sprang up.  There were organized Bee Gee record burnings.  Disco did not last long, as MTV and the British music invasion of the early 80's put techno pop on the top of the charts.  Whether you like disco or not, the people dancing in this movie sure seemed to be having fun. 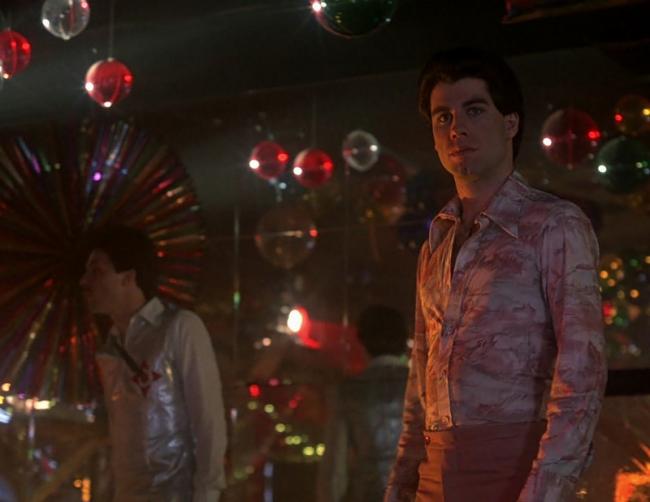 The music and the dance scenes are exactly why this movie is remembered. In fact, it had been many decades since I'd last watched this movie and I'd forgotten everything about it except for those moments. Before I rewatched it, I couldn't have told you that Tony even had a brother, but I could still mimic his pick an apple and put it in your pocket dance move while singing the lyrics to "Staying Alive" or "More than a Woman". No matter how dated those songs and especially the dancing seem, they are extremely iconic. Travolta posing in that white suit on the multi-colored dance floor is one of those rare movie moments that everyone seems to be aware of whether they've ever actually seen the movie or not.

With the dancing so overshadowing the movie, it's easy to forget how good Travolta is in the lead role. Tony feels very real thanks to Travolta's performance and a script that isn't afraid to make him unlikable. He's no hero. He's selfish, often cruel, and he and his friends are pretty crude. And yet at the same time, you want to see this cocky kid make something of himself. His dancing has helped him see there's more to life than what's on the street. And that's what he sees in Stephanie. I see a connection between him and her that Eric didn't. Even though he knows or suspects that most of what Stephanie says is bullshit, they share a desire to escape from their life and to make something more of themselves. Annette would be perfect for Tony if all he wanted to do was work at the hardware store for the rest of his life, which clearly he does not. Travolta's Oscar nomination was well deserved.

I was less impressed with the rest of the movie. The subplots don't really go anywhere. Tony's brother shows up after quitting the priesthood just long enough to show Tony that you can change your life even when others don't want you to, but then just disappears. Tony's friend who gets his girlfriend pregnant shows Tony the danger of being trapped into a life and his death is the catalyst that moves Tony to take control of his destiny, but it's more interesting in how it affects Tony than it is as a story point on its own.

This movie is more than just a relic of the disco era, but that is exactly why it is and will continue to be remembered. The 1970s were a less polished, grittier, and hairier decade than any decade since. But even now, almost 40 years later, when we watch with wonder how anyone could ever have found those clothes fashionable, Travolta's presence transcends the era and its inherent tackiness. Watching him strut down the street to the sounds of the BeeGees, you might laugh at the hair and the clothes, but you can still see that he's got "it". 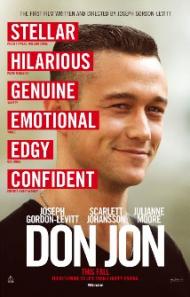