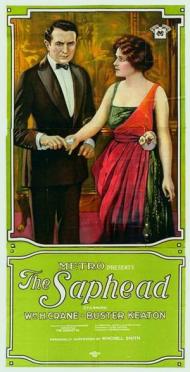 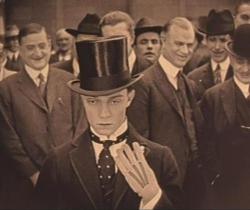 It is not easy being the new guy at the stock exchange.

The Saphead is a unique Buster Keaton movie.  It is his first feature length film, and is as much a drama as it is a comedy.  It is based on a play, The New Henrietta, that starred Douglas Fairbanks, who made his film debut in the movie version in 1915, retitled The Lamb.   Fairbanks suggested Keaton for the role when it was going to be remade.

Keaton was loaned to Metro for the duration of filming.  He would become a permanent Metro employee a decade later, when his silent comedies fell out of fashion.  Metro must have been a bit nervous about selling this as a Buster Keaton film.  He is the movie's biggest star and has the most screen time, yet his picture does not appear on the original poster and he is billed last in the credits

The Lamb takes place in the old west, while The Saphead takes place on Wall street.   Keaton is the son of a big Wall street tycoon.  His sister, Rose, is married to a broker, Mark, whom unbeknownst to her, has fathered a child with another woman.  Bertie (Keaton) is meanwhile in love with Agnes, an orphaned girl his father has raised as his own daughter.

To impress Agnes, Bertie tries to act like a wild man, staying out all night and gambling.  His efforts are fruitless as she is in love with him already.   His actions irritate his father, but his ire lessens when he learns that Bertie is to marry Agnes.   However, just as they are about to say "I do."  letters arrive from Mark's mistress.  To save his sister unhappiness Bertie takes them as if he is the one having an affair.

Bertie's father takes a trip to escape the drama.  In his absence, Mark tries a takeover of the firm.  Bertie, who has recently bought a chair on the stock exchange for 100 grand, ends up saving the day without realizing he is even doing it.

This is Keaton's least comedic role.  He has one physical gag when he gets tossed out of a room.  Other wise the humor derives from the title cards, "Do all these seats cost 100,000 dollars?"  He asks someone at the stock exchange, referring to a random chair against the wall.  When confessing to Agnes that he is not a bad guy, he says, "I'm good. I've tried my best to get over it - but I can't - and I still kneel down and say my prayers every morning - before I go to bed."

Without close ups or spoken dialogue, the humor is not easy to access.  This would have worked better as a play or talkie.  The Saphead will be forever remembered merely as an anomaly in Keaton's filmography. 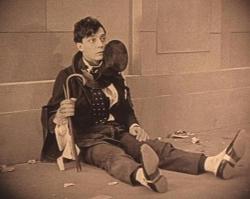 Buster Keaton in The Saphead.

Eric, you're far too harsh on this charming little movie. I also think you took it more seriously than it was intended. True, it's a very different sort of humor than a typical Buster Keaton comedy, but it's still quite funny, or at least lighthearted. Even the melodrama has a tincture of humor about it. And as far as the billing goes, the credits are presented like a curtain call at the end of a play, with the smallest parts listed first and the stars at the end, so it's natural that he's listed last. Even on the poster, although he's not pictured, he is given equal billing to William H. Crane.

Only the final scene in the stock exchange that Eric referred to, where Keaton is physically tossed out, truly feels like a Keaton film. It's not just the toss, but the way he runs around trying to buy up all the stock to the Henrietta Mine because he thinks the other stockbrokers are yelling Henrietta to tease him because that's also the name of the women everyone believes he had an affair with. He enters the Stock Exchange neatly coiffed, but leaves it in tatters.

Much of the rest of the humor does come from the title cards, as Eric said, but Keaton's physical performance does back up the jokes. He maintains he famous stoneface for the most part, but still manages to convey plenty of emotion. His clueless innocence is appealing, particularly at the casino where he has no idea how to gamble and yet ends up winning $38 thousand. Humor is also derived from just how rich Keaton's father is, giving Keaton a $1 million check when he learns that he's going to be married. No attempt is made to hide how short Keaton was, which also adds to the humor.

I agree that this might have been better suited as a talkie. 15 or so years later, it could have been a screwball comedy with Cary Grant in the lead. Still, even as a silent comedy, it manages to generate quite a few laughs. 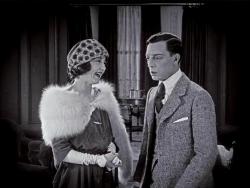 Beulah Booker and Buster Keaton in The Saphead.

I enjoyed this movie but think it would have worked better as a two-reeler. Only the final 25 minutes or so are truly memorable. I agree with Scott that although it has some melodramatic cliches it is really much more of a comedy than a drama. The title cards are cleverly written and Buster Keaton is very appealing as Bertie. His performance is quite droll.

His reputation as the Great Stone Face has actually done a bit of disservice to his legacy. It implies that he was only funny at physical comedy but he was very good at being amusing in small ways using subtle changes to his physiognomy. Bertie is written well. His guileless quest to impress Agnes by pretending to be a playboy is worth a few laughs and it really makes you want to root for him.

Still the scenes without Keaton, particularly at the beginning of the movie, could have been trimmed. Too much time is spent establishing Mark as the villain. Beulah Booker is cute as a button as Agnes (Beulah, now that's a name you just don't hear anymore). But this is Keaton's show. He looks adorable in that tuxedo and top hat (see photo in Eric's review).

The sequence at the stock exchange is quite funny. In fact, as I suggested earlier, it could easily stand alone as a two-reeler. But then The Saphead, as Eric wrote, was very important in Buster Keaton's career. As his first role in a feature length movie it enabled him to make the transition from shorts to directing and starring in his own brand of slapstick features. For that alone The Saphead is a truly important film.