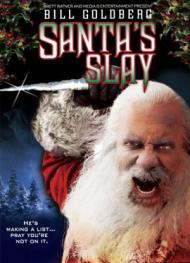 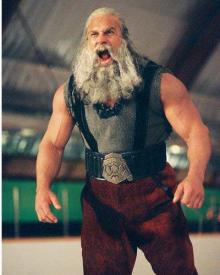 There have been countless Christmas movies made, of which, most are either comedies or dramas about discovering your Christmas spirit or learning to give,love or enjoy family.  The rarest type of Christmas film, besides ones that actually feature the birth of Christ, are horror Christmas movies.   Santa's Slay arrives in the vain of Gremlins (1984).  People get killed with a side order of laughs.

The movie opens with a scene that sets the tone for the rest of the movie.  The wealthy, snobby Mason family is sitting down to Christmas dinner, when Santa comes down the chimney and proceeds to kill everyone in sight.  Anyone who can shut Fran Drescher up is good for a laugh.  One girl pleads with Santa, "I've been good!"  Before he hits her with a table leg.

Nicolas is an innocent high schooler living with his eccentric Grandfather.  He works at a deli and has a girlfriend named Mary.  This Christmas he learns his family is quite unique, as he and Mary have to do battle with an evil Santa Claus that rides around in a Viking ship type sleigh that is pulled by a white buffalo called a "helldear."

In my favorite scene an old woman is being waited on in the deli when the owner says to her, "And have a very happy holiday there Mrs Talbot."  The old bat replies, "Don't use that political language shit with me, it's Christmas so wish me merry Christmas?"   The owner corrects himself, and wishes her, "Merry Christmas."  The women then snaps back, "Thank you... now go fuck yourself."

When Santa goes into a strip club, frequented by a local pastor, he keeps saying, "Ho, ho ho."  every time he sees a large breasted topless dancer.  Not all the jokes work. While looking for Nicolas and Mary in the school library, Santa picks up a copy of A Christmas Carol and remarks "Boy, Christmas can sure scare the Dickens out of people."

The special effects were done on the cheap.  The plot is extremely limited. The world hinges on a curling match.  The acting is nothing too much to brag about.  James Caan looks absolutely embarrassed in his cameo.  Santa is played by a Jewish steroid hound WWE star.  However, if your in the right mood or have a slightly dark/goofy sense of humor all of these things can be a plus.  Seriously, how many movies feature curling?