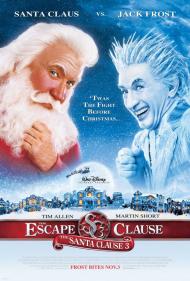 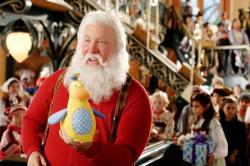 Tim Allen in The Santa Clause 3: The Escape Clause.

Whether it is about redemption, like in Scrooge, or excessiveness, as shown in Christmas Vacation, every Christmas movie seems to have a message. In The Santa Claus 3: The Escape Clause we see Scott Calvin going through the pressures that always arrive at the holiday season. Of course he is Santa Claus and Mrs Claus is about to have a baby and the in-laws and the ex-wife are visiting. On top of all that, Jack Frost is plotting to steal Christmas from the jolly fat one.

As the third installment in the series, The Santa Clause 3 has lost most of what gave the first and second movie it's heart. In those 2 movies, Scott Calvin and his son, Charley, learn to get along and bond even though Scott is divorced from Charley's mother. In this installment, Charley is only in a few scenes. He is replaced with a half sister who, some reason, calls Scott, "Uncle".

The one time the movie engages the audience emotionally is when Scott Calvin sees what would have happened to his life if he had never become Santa Claus. A revisit to the first movie is also interesting, but it serves to remind that it was a far superior film to this one.

Most of the movie is filled with candy cane sweetened fluff. Short sings a version of New York, New York reworked as North Pole, North Pole. Short also spends a great amount of time being destructive and annoying in Santa's workshop. His demise is supposed to be sweet and heartwarming but it is a direct lift from The Grinch and not executed nearly as well.

The addition of Margaret and Arkin as Scott's clueless new in-laws works but they have too little to do. Arkin is appropriately grumpy and Margaret is especially good at getting in digs. At one point she compliments her daughter while slipping in a comment about how she has shut them out of her life.

Sequels are always welcome in my book, but they must be loyal to what has been presented before them and remember what made their predecessors good. The Santa Clause series is about a broken family still being a family. This installment, for the most part, sidesteps that message for sake of a frazzled, stressed out Santa. I get that way enough on my own at the Holidays. I prefer the message of the earlier films that family is family no matter what.