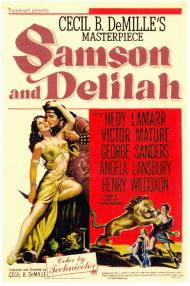 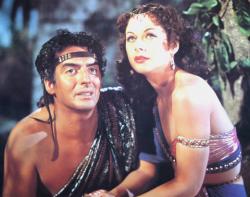 Victor Mature and Hedy Lamarr in Samson and Delilah.

Cecil B. DeMille is the true father of Hollywood. For starters he directed the first feature-length movie ever made in Tinsel Town, The Squaw Man which he began filming way back in 1913. His name remains, even to this day, synonymous with Hollywood spectacle and pageantry and he helped define the image of what a motion picture director was. He is most famous, of course, for his Biblical epics with their casts of thousands. Nobody did Sword-And-Sandal pictures better than DeMille and Samson and Delilah is one of his best. He would direct only two movies after this one, The Greatest Show On Earth and his second version of The Ten Commandments. Samson and Delilah grossed 12 million dollars in 1949 making it the biggest hit that Paramount Pictures had ever had up to that time.

Based on the Bible story from the Book of Judges, Samson and Delilah opens with the mellifluous voice of DeMille setting the scene, just as he would later do in The Ten Commandments. Strong man Samson is a member of the lowly Danite tribe, subservient to the ruling Philistines. His long hair represents his covenant with God and is the source of his strength. To make a long story short he gets mixed-up with the beautiful Philistine Delilah, she discovers his secret and cuts off his hair while he sleeps. Overnight the once mighty warrior becomes a pathetic blind slave. But Samson's hair grows back and he destroys a temple full of partying Philistines, killing everyone in it including Delilah and himself.

This movie was shot in glorious Technicolor and features spectacular sets and costumes. It also is fairly gory for its time. The scene where Samson goes on a rampage with the jawbone of an ass for example shows quite a bit of blood at a time when most people died in movies without any visible wounds. There is also a pretty realistic fight between Samson and a lion.

Hedy Lamarr is top billed as Delilah and she has the most screen time. She hams it up playing the sexiest bitch since Vivien Leigh played Scarlet O'Hara . Victor Mature is Samson. He looks the part but acts only slightly more animated than an ironing board. The great George Sanders and a very young Angela Lansbury also star, as does a teenage Russ Tamblyn.

DeMille loved archetypal stories with plenty of violence and sex. He understood how to put on a show but had very little feel for acting. The bad acting in his movies only adds to their campiness, however unintentional. Samson and Delilah is a quintessential DeMille epic.