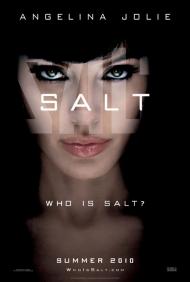 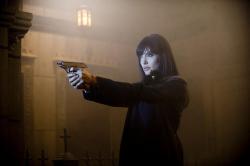 In the same way that Nazi Germany was a boon for the war movie genre, what would writers of espionage films do without good old communist Russia?  While it might seem like that particular horse has been beat to death, the recent real-life news of Russian spies here in the USA shows that there might just be some life left in it after all.  The makers of Salt certainly thought so in this action-packed, if over-the-top, thriller starring Angelina Jolie in full-on kick-ass mode.

Jolie plays Evelyn Salt, a CIA agent who interrogates a Russian defector who tells her, and her listening superiors, that she is in fact a Russian sleeper agent who will assassinate the President of Russia during his upcoming visit to New York City.  She worries that her husband might be in danger and therefore doesn't want to wait around while her bosses work out whether or not she is guilty as charged.  She therefore breaks out of the CIA building and very soon, as she heads straight to NYC, the plot begins to make you wonder whether or not she might actually be a Russian spy after all.

Reportedly Angelina Jolie was once told that she would make a great Bond Girl, to which she replied that she'd rather play Bond than one of his babes.  With this role she gets her chance to fulfill her espionage fantasy and depending upon the success of this installment, she's set herself up for a franchise.

This is definitely a part where Jolie's past helps her carry off the part.  Because Jolie has a reputation for being a dark character it helps make her being able to kick so much ass more believable.  Otherwise, you might wonder just how this skeletal stick figure is able to do such amazing stunts.  I mean, I remember when Jolie had curves.  Now the only curves she has left are her still puffy lips.

The action is all first rate and once it gets going it never lets up.  Jolie climbs buildings, bounces around on top of trucks driving down a highway, climbs down an elevator shaft and beats the shit out of CIA agents, Russian operatives, half the NYPD and some of the FBI in a series of popcorn chomping moments.

All of the action does help to cover up the numerous plot holes that litter the movie.  The ending  contains a couple of twists, but unlike some movies with twists, where you think, "Oh, now everything makes sense" you instead think, "Well, if that's the case than that, that and that make no sense at all."  It's difficult to discuss the holes without giving things away, but suffice to say that the main scheme is over complicated and relies heavily on coincidences and because of the revelations at the end of the film, the previous actions of certain characters no longer seem believable.

The ending does set up room for sequels and I would definitely go to see any that they make, but it would be nice if they could come up with a smarter script that provides a bit more characterization for Evelyn.  The thing about the James Bond movies (apart from the Daniel Craig Bonds) is that James Bond is a very distinctive character.  He's a sauve, slightly sexist, sophisticated British agent who's always ready with a quip.  In so many other espionage films (and Craig's Bonds) the lead character is just a tough guy who kicks ass.  While Salt is given a bit more background than that, her most distinctive feature is really just that she's female.  The fact that this part was originally intended for Tom Cruise but was adapted to suit Angelina Jolie should tell you what you need to know regarding its distinctive traits.

Despite its problems, Salt is still rollicking summer movie fun and a great way to dodge the heat. 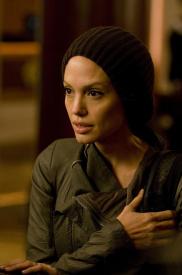 Just because you visit people in third world nations does not mean you have to look like them.

I did not think, "Well, if that's the case than that, that and that make no sense at all."  I retraced the movie in my mind and thought just the opposite.  I do not want to give it away but once all the truth is known you understand Salt's motives.  Everything she does leads her to something else.

The one and only scene that I did not get was why did Orlov choose the method he did to first talk to Salt?  Could he have not just visited her apartment or stopped her on the street?  When you learn what he really is, it does not make sense that he would contact her this way.

I do agree with Scott's opinion of Jolie's physique.  She spends the entire film buried under clothes to hide just how skinny she is.  I would bet that a body double was used in the torture scene where she is wearing only underwear.   Another complaint I have is what is with those awful wigs?   I guess she hated the wigs as well, because she also wears several hats.  The fur hat and wrap scream Russian agent.

Salt is definitely a sit back, shut up, stop thinking and just enjoy the ride movie.  It introduces a mystery.  It adds some emotional intrigue,  It throws in lots of over the top action.  My favorite part is the highway chase scene.  It entertains the whole time.  You just have to accept that this 90 pound chick can kick several grown, military trained, male agents ass at the same time.