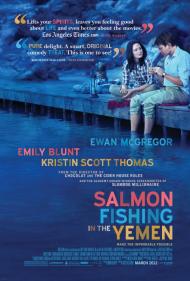 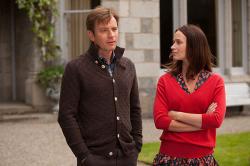 Ewan McGregor and Emily Blunt in Salmon Fishing in the Yemen.

Salmon Fishing in the Yemen is a gentle, British romantic comedy with mild aspirations to show the value of faith, patience and the courage to go against the flow. It succeeds because of its humor, heart, and most importantly because of the charm of its two leads, Ewan McGregor and Emily Blunt.

Cynics should be warned that this is a movie with no real edge and one that does drip fairly heavily with sentimentality. It was directed by Lasse Hallstrom, who previously directed such films as What's Eating Gilbert Grape, The Cider House Rules and Chocolat. The script is by Simon Beaufoy, the writer of The Full Monty and Slumdog Millionaire.   If you enjoyed those movies, you'll find plenty to like about this one. I know that I did.

McGregor plays Dr. Alfred Jones, a socially awkward Scottish fisheries expert, who is contacted by Harriet (Blunt), the English financial representative of Sheikh Muhammed of Yemen. The Sheikh is a progressive Arab on friendly terms with the United Kingdom and a rabid fisherman who has wiled away many hours fishing for salmon on his estate in Scotland. He would like to introduce Salmon to his home country and he wants Dr. Jones to spearhead the operation. The English government, lead by press secretary Patricia Maxwell (Kristin Scott Thomas) is keen on the project because they see it as an opportunity to show a feel good story coming out of the Middle  East, which they hope will distract voters from the war in Afghanistan.

There are several subplots, such as Harriet's army Captain boyfriend going MIA in Afghanistan and Dr. Jones' troubled marriage, which gets rockier as he becomes more involved in the salmon project. This leads to a budding romance between Harriet and Dr. Jones, although their relationship is very English and low key.

Ten years ago the lead role of Dr. Jones would undoubtedly have gone to Hugh Grant, or at the very least been offered to him. His stammering, awkward English character would have suited this part perfectly. McGregor does a terrific job in the part, but I couldn't help but be reminded of Grant.

Blunt is as cute as ever, but hers is definitely the supporting role. She plays the straight 'man' to McGregor's eccentricities. They both have a couple of quiet, dramatic moments that they handle quite well, but never anything over the top. It's all under played and very English.

Kristin Scott Thomas is a scene stealer as the press secretary. She provides several moments of comic relief, using profanity expertly. There are also several funny scenes of her texting the prime minister, with their texts appearing onscreen.

The salmon themselves are used as a metaphor. Their swimming upstream, which mirrors the whole project, is the most obvious example. The Sheikh and Dr. Jones have several conversations where the Sheikh talks about faith and the patience that is required as a fisherman, which Jones at first refutes as a man of science.

Fans of romantic comedies, particularly English romantic comedies, will find plenty to enjoy here. Highlighted by a great cast and some quirky humor, this is a light hearted movie that will leave you feeling good by the end of it. 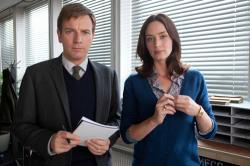 Ewan McGregor and Emily Blunt in Salmon Fishing in the Yemen

I was not as enamored with Salmon Fishing in the Yemen as Scott.  The pace is a bit slow and the romance, as he wrote, is very low key.  However British it may be, I still missed seeing a spark in the relationship between Fred and Harriet.

As the movie starts, Harriet has just started a passionate affair with a military officer named Robert, that she has just met, while Fred is in a passionless marriage.  When he and his wife Mary, finish having fully clothed, under the blankets sex, his wife says something to the effect of, "That ought to hold you for a while."  and Fred responds with a polite, "Thank you."

Fred and Harriet find themselves working together while their significant others are away.  Robert gets sent to Afghanistan and Mary takes an assignment over seas.  Fred and Harriet come to a professional understanding and learn to like each others company.  Like an old Spencer Tracy/Katharine Hepburn film, Fred and Harriet reach a level of respect for each other before they ever become intimate.

The entire point of the film is explained in the final scenes when the salmon are released and we find out if they will swim upstream by instinct or just go with the flow of the river.  Meanwhile, Harriet is being pressured by the press and British government to return to England with war hero Robert.  Mary texts Fred that she wants him to come home.  Will Fred and Harriet decide to go with the easy uneventful flow of life or swim against the current with possible dangerous pitfalls and the potential for excitement?

The cast keeps things firmly grounded.  This makes for a realistic portrayal of love and relationships but it does not actually make good cinema.  At one point Fred tells Robert that he loves Harriet, and then nothing happens.  The casting of Hugh Grant would have lightened the proceedings, but clearly Hallstrom was going for a more, unfortunately, serious tone. 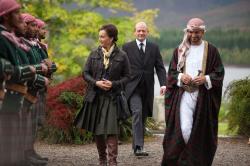 Kristin Scott Thomas and Amr Waked in Salmon Fishing in the Yemen.

I'm writing this review the day before the 2013 Golden Globes ceremony where this movie is nominated for three awards: Best Motion Picture - Musical or Comedy, and the lead Actor and Actress awards for a Musical or Comedy for McGregor and Blunt. Whether or not it goes home with any of these awards Salmon Fishing in the Yemen is an enjoyable -if not truly memorable- movie that tells a nice little story based on the popular 2007 novel by Paul Torday.

This is a comedy and a romance but, as both my brothers pointed out, it never really lets go in either direction. It contains its share of amusing moments that will induce chuckles but it lacks any truly gut busting jokes or situations. Likewise, as a romance it never gets heated or even remotely sexual. It stays at a slow simmer the entire time.

I enjoyed the conversations between Dr. Alfred Jones and Sheikh Muhammed about faith. As a man of science Dr. Jones is skeptical about religion and belief in anything he can't explain rationally. The Sheikh, on the other hand, is a man who seems able to combine faith with logic. My favorite moment was when Dr. Jones tells the Sheikh that he believes (without any scientific proof) that the farm salmon will instinctively swim upstream and the Sheikh -recognizing the irony- replies, “You mean you have faith?”

As Scott said, Kristin Scott Thomas is a scene stealer as the ambitious press secretary with her overdone makeup and conservative power-suits. Whether cursing in frustration at her children or conniving behind the scenes, she is a woman that likes to be in charge, and Scott Thomas captures her beautifully.

As with most of his films, Lasse Hallstrom cannot resist a feel good ending where everything is wrapped up neatly and tied with a pretty bow. Still, as a pleasantly harmless diversion Salmon Fishing in the Yemen is spot on and its heart is definitely in the right place.