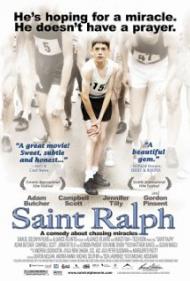 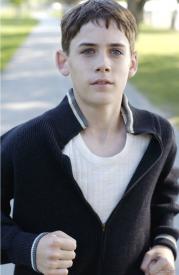 Saint Ralph is one of those films I came across many times in a DVD store, but for whatever reason always passed it by. I recently found it at my local library and thought, “Since it’s free, I may as well give it a viewing.” I am very glad I did.

Ralph is an underclassman at a Catholic high school in 1953. He is considered incorrigible by the Priests. The film opens with him admitting in confession that he has “abused himself” 22 times in the past week. He gets caught smoking and his favorite teacher/Priest, Father Hibbert, knows that he gives him forged notes from home. He really puts a bad spotlight on himself when he contaminates the local pool in what is a hilarious scene.

Ralph tries hard to put up a brave front and act like he has all the confidence in the world. In truth, his life is hanging by a thread. Ralph is an only child. His father died in the war and his mother is bed ridden in a hospital. He tells people that he lives with his grandmother and tries to sell his possessions for money.

Things take a turn for the worse when his mother slips into a coma. After a nurse, who has taken a liking to Ralph, tells Ralph it would take a miracle to save her, Ralph comes up with a plan. He asks Father Hibbert, “Producing a miracle is possible?” and Father Hibbert replies, “Flying to the moon is possible, but it’s never going to happen.”

After having a vision of God, whom appears to Ralph in the form of his father dressed as Santa Claus, Ralph decides to create a miracle by entering and winning the Boston Marathon. Ralph then joins the cross country team, which is coached by Father Hibbert. He begins training like mad. Of course everyone tells him he will never do it, but they forget that incorrigible people are hard to stop.

Saint Ralph is played for laughs but there is an undeniably sad undertone. Even though he knows that he is a hairs breath away from a foster home and a public school, Ralph is ever the optimist. He annoys some as easily as he charms others. He can seem mentally deficient one moment and then quite smart the next. Ralph is an individual and one of the most likable of teenagers ever portrayed on screen.

We smile at his thought process. When Father Hibbert tells Ralph, “All I have to do is hear your confession. Then I can absolve you of your sins, and guess who's pure.” Ralph comes back with, “Father Hibbert, why didn't I think of that earlier? I could have been sinning all along!” We feel his pain, such as on Christmas Eve when he is turned away from the hospital because it is after visiting hours.

Ralph is by no definition a saint. He is just a gawky kid dealing with his hormones, his faith, his mother’s ailment and the creation of a miracle. One minute he is upset by his best friend and happy the next when the girl he likes calls him. As with all of us, Ralph’s world is a series of ups and downs. He is brave one minute and scared the next.

Saint Ralph is a wonderfully emotional film. It grabs you by the heart and leaves you believing, not in miracles, but in the power of the human spirit. The climactic Boston Marathon race scene is beautifully punctuated by Gordon Downie's stirring version of Leonard Cohen’s “Hallelujah”. Ralph finds comfort in religion and in those who believe in him, while I found comfort in watching Ralph trying to overcome obstacles and inspiring those around him through his determination. Do not wait. See this movie.