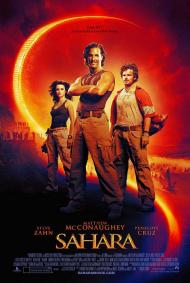 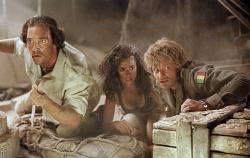 On paper, Sahara sounds like a good idea. It wants to be a cross between a James Bond and an Indiana Jones movie. And while there is some good action, the movie lacks any heart to draw you into it. It remains a shallow B-movie lacking compelling characters and originality.

Matthew McConaughey stars as Dirk Pitt (Can you believe that name?), a former Navy Seal who now spends his time treasure hunting with an organization known as NUMA (National Underwater and Marine Agency). His obsession is to discover the location of a Civil War ironclad ship that he believes made the journey across the Atlantic to come to rest in Africa. After a tip from a local underworld connection, Pitt along with Al (Zahn), his trusty sidekick and comic relief, is soon heading up river into civil war torn Mali, accompanied by beautiful Dr. Eva (Cruz), who is in search of the source of a local plague. Naturally, as these things tend to happen in this sort of movie, both Eva and Dirk's quests turn out to be connected.

McConaughey is blandly generic in the lead role. Apart from being tanned, buff and quick with a smart remark, Pitt has no depth of character to speak of. Not all of this is his fault however, the writers, despite the four of them that are credited with writing it, haven't really given him much to work with. His chemistry with Cruz is almost non-existent. Although they flirt and smile at each other, sparks fail to materialize. Originally, Hugh Jackman was going to play this part. I can only assume he would have done it better.

Of the three main characters, it is Zahn who shines in the supporting, best friend to the hero, role. He gets the movie's best lines and provides the humor as the liveliest character. In his scenes with McConaughey, he manages to generate the chemistry so lacking between Cruz and McConaughey.

There are also several scenes in the movie that stretch credulity to the breaking point. At one point, Al and Dirk are driving across the desert after being separated from Eva. She is hiding in a well while armed soldiers are looking for her above. With the entire length of the Sahara surrounding them, Al and Dirk still somehow manage to drive straight to her. Later, Al and Dirk are being driven away from the villain's headquarters in the back of a jeep. They're on a road in the desert that leads straight back to the headquarters. And yet, when they manage to escape, (by sliding the entire jeep bed off the back of the jeep, somehow without letting the drivers hear) they immediately begin traipsing across the desert seemingly at random, through sand dunes and wasteland that makes for pretty cinematography but makes no real sense. Why didn't they follow the road back?

Despite the lack of character development and plot holes, there are some things to enjoy in the movie. It's fast-paced and does contain some good action sequences. I was never bored while watching it, but I can't say I was ever excited either.

Like a lightweight novel suitable for beach reading, Sahara is mildly entertaining, but I don't foresee a franchise happening. 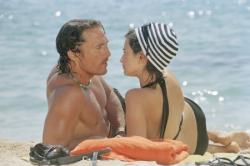 Sahara is a fun time at the movies! Sure it missteps a couple of times, but Sahara is glorious Hollywood escapism.

The characters may not be all that compelling but they are entertaining. The rapport between Dirk and Al is central to the movie and any sequels that may be made. They have all the chemistry. There is nothing but zzzzz between Dirk and the Doctor. The best moment they have is when he tells her that, “You throw like a girl."

The movie has a great setup involving both history and contemporary issues. However, the movie never answers a few obvious questions like why did the iron ship go to Africa in the first place? Cruz is cute but bland. Her role should have gone to a centerfold type actress. This movie is all about eye candy so it should of had a sexier heroine.

Sahara is fast paced fun! It definitely could become a franchise as long as it keeps McConaughey, Zahn and Macy who does a great job as The Admiral.