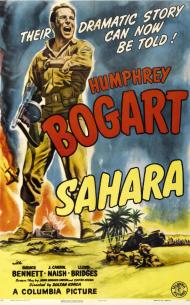 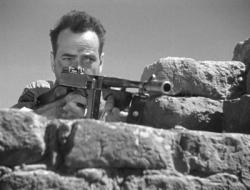 Sahara is one of the best World War II movies made during the war. It has a very simple yet action packed plot that keeps your interest throughout. It also stars one of the greatest movie stars of all times.

Joe is a tank commander fleeing across the North Africa desert with two other Americans in their tank. Along the way they pick up some British soldiers and a lone French one. Later they come across a British Sudanese and his Italian prisoner. Lastly they capture a Nazi pilot after shooting his plane down. With the Sudanese leading them, they find an old abandoned fort with a slow running well. The Nazi's soon catch up to them and they battle for the water and their lives.

Many Hollywood films made during this time were sheer propaganda for the war effort. Sahara is no exception. It makes several relevant points for the time. The first obvious one is that it takes an international coalition of allies to defeat the Nazi's. The second is to acknowledge sacrifice for a greater good. So many young Americans had died those first few years of the war and this movie, along with many others like it, were probably therapy for many people.

One of my favorite lines comes at the end of a speech the captured Italian soldier gives to the captured German soldier.  It expresses his dislike for living under Mussilini's rule and ends with, "As for your Hitler, it's because of a man like him that God - my God - created hell!"

So many movies today want to shove their politics down our throats. They can do it all they want, but they need to take a lesson from such films as Sahara. First and foremost, the movie has to be entertaining. If the political statements over shadow the movies entertainment value then all is for nought.  Bogie's last line in the movie is a bit over the top, but I sure bet the audiences in 1943 felt it where it counted. 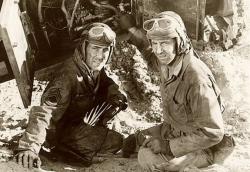 While the plot does come with a pro-war, sense of duty message, it's all in service to the story. It's not a heavy-handed message at all. I didn't find Bogart's final line to be over-the-top in the slightest. It also does nothing to glorify or clean-up the consequences of the war. Many of the main characters die and until the end I wasn't sure if any of them would make it. Yes, it's about doing your duty, but it doesn't skim over the cost of performing that duty.

I found the character of Tambul to be interesting. He's a black Muslim, but he's treated like an equal by everyone except the Nazi, who starts to call him the German equivalent of "Nigger" until Bogie stops him. While Hollywood's never been shy about throwing in a token ethnic character, this movie was released in 1943 when the American Army was still segregated. As Eric pointed out, by showing his character, along with the British, American , French and South African soldiers, it's making a point that World War II was a war that was won by the Allies.

The atmosphere and the setting are both well done. You can feel the dry desert air. By the end of the movie I swear I was extra thirsty myself.

Along with the great story and everything else, you've got Bogie to top it all off. He's perfect in this role as the tough tank Sergeant. His face and personality are as weathered as the desert landscape. Other actors of the time could have played this part, but none in quite the same way.

Sahara is a classic and one of the most enjoyable World War II movies that I've ever seen. 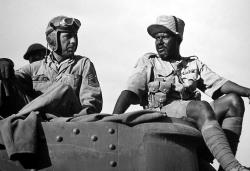 What was it about Bogie fighting Germans in Africa that went so well together? Although Sahara isn't as legendary as Casablanca or The African Queen it is a classic. This time around, instead of outwitting Nazis in a saloon or running river rapids in the jungle in order to sink a German boat, Bogie leads a tank-filled international coalition against Nazis in the desert, after retreating from Rommel's troops. As both my brothers wrote, this is a tense, action packed war picture with a terrific script and memorable performances from the cast.

Bogart gets some excellent support from his costars. Bruce Bennett (he would later play Joan Crawford's husband in Mildred Pierce and reunite with Bogart for The Treasure of the Sierra Madre) has one of his best roles as the heroic Waco Hoyt, that goes for reinforcements. A young Lloyd Bridges has a small part as a British soldier. J. Carrol Naish was Oscar nominated for Supporting Actor for his turn as the Italian POW Giuseppe. Carl Harbord, as a British soldier, has the most poignant -if cliched- death scene.

Rex Ingram was one of the few black actors making a decent living in studio era Hollywood. He played Jim opposite Mickey Rooney's Huck Finn in the 1939 version of Mark Twain's literary masterpiece. His most famous role was as the Genie in the 1940 remake of The Thief of Bagdad. His Sergeant Major Tambul is one of the most heroic soldiers in the movie and this is certainly one of the best roles available for a black actor at that time. As Scott pointed out, the United States Military was still officially segregated in 1943.

Sahara proves you don't need a cast of thousands and tons of special effects to make a great war picture. Just take a superb cast of actors (led by one of the greatest movie stars in history) place them in a dangerous and unforgiving setting, and face them off against an army of superior numbers and fire power. Every character becomes such a real person that each death elicits a true emotional response.

I'm in complete agreement with Eric and Scott, Sahara is one of the best WWII movies ever made. Oh and just for the record, I'm on Scott's side as far as Bogie's final line goes. Yes it's a bit melodramatic but at the same time it's a fitting tribute to these heroes, lest their names be forgotten.