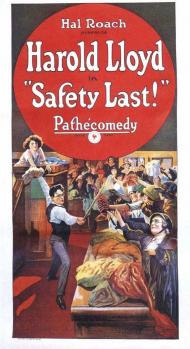 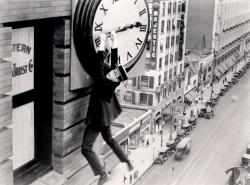 Safety Last is Harold Lloyd's most famous movie. The shot of him clinging precariously to the big clock on the side of a tall building is one of the most iconic images in silent movies.

Lloyd got the idea for this movie when he saw real-life human fly Bill Strother scaling the face of the Brockman Building in downtown Los Angeles. He in fact shot the scenes of the climb first, using Bill Strother as his double for the long shots, then afterward created the backstory that sets up the famous climax.

The story is very simple. Harold plays a young man from a small town who leaves his sweetheart behind and heads to the big city to make his fortune, with the idea of sending for his girl once he makes good. He lands a job as a salesclerk for a fancy department store. His girl surprises him one day by showing up at his job. Now he has led her to believe that he is doing better than he really is and so he must keep up the charade that he is really the store's manager.

The sight gags come fast and furious like in nearly all of Lloyd's movies. He may have lacked the artistry and pathos of Chaplin or Keaton but for my money he was the funniest of the three. On a trivia note this is the only movie of his career where he used his real name. He usually went by Harold and then a made-up last name, but in Safety Last his name is clearly displayed at least twice as Harold Lloyd.

The movie really takes off once Harold starts climbing the building. After seeing his friend (Bill Strother) escape from a policeman by climbing a building Harold gets the idea for a publicity stunt for the store he works at. The idea goes over and a $1,000 dollar prize will be given to the climber. Originally Harold and his friend plan on splitting the money while the friend does the actual climbing. But wouldn't you know it, the cop that his friend ran from shows up and Harold has to make the climb himself.

The climb was shot using 2-story facades that were built on the roofs of 3 different buildings. First a 2 story building, then a 7 or 8 story building and finally a 12 story building. So, though Harold Lloyd never actually climbed the face of a tall building he was in danger as he climbed these facades only feet away from the edge of the roofs. Pretty impressive for a guy missing the thumb and index finger of his right hand.

Newly available on DVD, Safety Last is a comic masterpiece not to be missed. 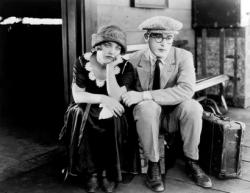 As a kid I remember watching and loving edited versions of Harold Lloyd's movies on Sunday Morning on one of our local channels. Watching Safety Last now as an adult was very nostalgic, but alas, like so many things from our childhoods, it failed to live up to the memory. I also think that knowing now that Harold didn't actually climb the building, as I'd long believed, hurt my watching of it. Part of the magic of watching it all those years ago, was believing that Lloyd had actually done the climb.

I was also surprised by how long it takes for the building climb to begin. As I said, the versions I watched as a kid were edited down, probably to 30 minutes, but I don't remember exactly. In that version there was no build up to the climb, it pretty much was the climb. Not that some of the earlier stuff in the movie isn't funny. In fact, I laughed more at some of the scenes with Harold in the store than I did at the climb itself.

Unlike Patrick, I've never been a big fan of silent movies. There are moments of brilliance in some of them; Chaplin's City Lights contains several, but overall I find the lack of dialogue a distraction. Unlike City Lights, for instance, Safety Last would have worked better with sound.

Perhaps if I were a kid again, I would have fallen in love with Harold Lloyd all over again, but instead, while a nice trip down memory lane, the movie failed to do anything but gently amuse. 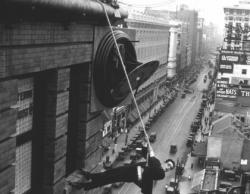 Silent films all have a been there done that feel. Sure, they were the first to pull off these gags but after a zillion sitcoms had a character pretend to be someone else to impress someone, the plot here seems ancient.

What I get most out of silent films is the history lesson. These nearly 100 year old movies show how people dressed and acted then. At one point Harold is reprimanded because he may offend a female customer by working without his jacket on.

The most unique aspect I found to Safety Last are the completely offensive scenes of minorities. At one point Harold scares a black man because he thinks a mannequin came to life when in fact it was just Harold dressed up. The black man does the whole bug eye routine and ends up climbing a wall. In another scene Harold is practically pushed into a jewelry store, Silverstein's and Sons, where the greedy Jewish jeweler literally wrings his hands as he makes the sale to Harold. Were such stereotypes that common then?

Safety Last is worth a look but it is more out of curiosity than entertainment. 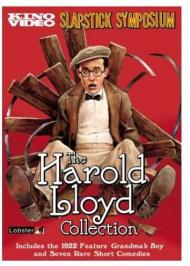