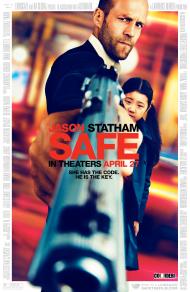 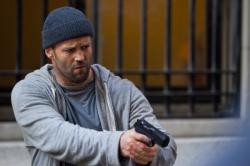 The title of this movie has three meanings. A safe with $30 million in it plays a big part of the plot. Statham's character, Luke, must keep Mei, the little Chinese girl, safe from harm. And lastly, it could mean Jason Statham's career choice of playing the exact same role we've seen him play so many times before.

Statham is Luke, an ex-cop, ex-some sort of secret operative, who, when the movie opens, is married and working the cage fighter circuit in New Jersey. When he wins a fight that he's supposed to lose, some Russian mobsters kill his wife, but leave him alive with the warning that they will kill anyone who he gets close to. He ends up wandering the streets of New York City, contemplating suicide. He stops when he sees a little Chinese girl being chased. He saves her life and finds himself caught up in a gang war between the Russian and Chinese Mobs with a group of corrupt cops thrown into the mix.

The action is far fetched and exaggerated. Gun battles and car chases take place all across the city with impunity. It's a war zone, the wild west and a video game all rolled into one. If this much violence took place in real life over the course of 24 hours, you'd probably see the national guard brought in to close the whole city down.

As you'd expect from Statham, the fight scenes are hard hitting and well done. They do suffer from the overuse of handheld, jittery camera work syndrome that has become so prevalent in action movies today. Despite that though, the fights are definitely the most entertaining aspect and the only real reason to watch. There's a particularly hard hitting one on a subway train near the beginning.

The plot is overcomplicated and nonsensical. It involves corruption that goes all the way up to the Mayor's office. All of it revolves around the little girl with the photographic memory who has a code memorized that will open up a safe. Everyone wants the code or her dead, but no one ever suggests simply changing the combination to the safe so that what she knows is useless.

Not only is this character one we've seen before from Statham, but the plot also feels like a retread of other films. Leon, starring Jean Reno and a young Natalie Portman did something similar and much better way back in 1994. Statham himself had to protect a small child from killers in Transporter 2. The script here though isn't strong enough to suggest a genuine emotional relationship between Luke and Mei. He's just a decent guy trying to protect a kid, but I never felt there was anything very personal in their relationship.

In a nutshell, if you're a fan of Statham's typical roles then you'll probably at least mildly enjoy this one. It breaks no new ground and he's certainly made better, but the action is good enough and the pacing fast enough, after a slow start, that you at least won't be bored. However, while he might please current fans with this mediocre effort, he's probably not going to win over many new ones. 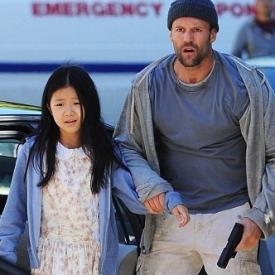 Safe was Jason Statham's 29th film in 12 years, if you count voice work and a couple of cameos. With so many films made in such a short amount of time, (by todays standards) Statham seems to be making movies more for a pay check than any real concern for the quality of the finished product. For the sake of not being compared to Jean Claude Van Damm, Statham needs to consider roles that have more of a plot than what we have here, which boils down to getting into a fight, finding a little girl, and getting into lots more fights. the end.

Scott mentioned the flaw of the safe combination not being changed. Or they could have just relocated the money. Either way, making a child so key to a 29 million dollar transaction is ridiculous. The biggest flaw for me is that in a city of 8 million people, Statham appears in the same subway at the same time as a little girl who has connections to his past. Because he meets her, he gets to exact revenge on the Russian mob and some crooked cops from his past. I know that movies are littered with coincidences and so many are built around that coincidence, but it is a huge glaring flaw none-the-less.

What Safe needed was some subtlety and some background into the actual character of Luke. Yes, we learn stuff about him as the film races along, but never enough to give a shit about him. In fact what we do learn is that he used to be just as crooked as every one else in the movie. Sure, his wife, who has no screen time, is killed but Luke is just as corrupt as those who killed her. How can I feel sympathy for him when he kills countless people throughout this film.

Writer/director Boaz Yakin never gives the audience a reason to actually care about Luke, other than he is played by Statham. Of course we do not want to see a child hurt, but her value to the plot, as already pointed out, is tenuous as best. Yakim may be suggesting that this journey Luke is on is to right all of his previous wrongs, but all the fight scenes mean little if we do not actually care who comes out the winner.

Yakim needed to find a better way for Luke and Mei to meet and a real reason for him to commit himself to her. How about opening the film with a scene where we see Luke with his wife and special needs daughter. They are sitting at a table going over medical bills. Meanwhile, the daughter is writing a letter to Mei, her Chinese pen pal. Have his daughter killed when his wife is. That would explain why Luke broke the law. He had expensive bills to pay. Mei now has a reason to find Luke as he is the only person she remotely knows in New York and he has a reason to protect her. Is writing movies really that hard?