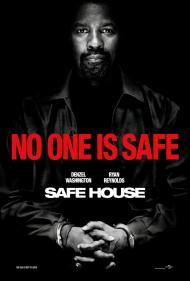 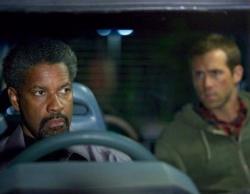 Safe House is proof that some movie stars are worth their high salary as Denzel Washington is the best thing about this rather generic, mediocre thriller. Unfortunately he's playing the supporting role to Ryan Reynolds, whose character and acting is even more generic than the plot.

Reynolds is Matt Weston, an inexperienced CIA agent in charge of a Safe House in Cape Town, South Africa. He finally gets the excitement that he's been seeking when Tobin Frost, a former agent played by Denzel, is brought into the house for questioning. The excitement soon escalates beyond his imagining when the house is invaded and the entire interrogation team is murdered with only Weston and Frost managing to escape. Will Weston be able to bring Frost in before who ever tried to have him killed strikes again?

The movie is shot in a distinctive and stylish manner that is completely distracting and unnecessary. There's a grainy look to each scene with lots of cuts and some odd, shaky handheld camera angles. The lighting makes everyone look as if they're standing under florescent bulbs, which isn't a great look for anyone. This is director Daniel Espinosa's first Hollywood film and either he's trying to make his mark or he's trying to cover up for the generic, predictability of the plot. Either way, he should just stepped back and filmed the story.

Frost is the most interesting character and Washington gives him an edge and a sense of danger. Reynolds' Weston is younger and in better physical shape, but Frost comes across as much more threatening and way more of a badass. His is a character that I wanted to know more about, which is always a good sign. We learn some of his backstory, but not all of it. His motivations aren't made perfectly clear. Most of the movie is told from Weston's point of view, but the ones that center on Frost are the most exciting and entertaining. Reynolds is a prettyboy with some charm, but Washington is a movie star and a genuine actor.

The plot suffers from some obvious twists, plot holes and never really gives us anyone to root for. Frost has a stolen computer chip that contains secret information about corrupt members of the espionage community. He doesn't want to expose them, he just wants to sell it. His character is the most interesting, but I wasn't on the edge of my seat to see if he could make some money. Weston's goal is to bring in Frost, but Frost is so much more interesting than Weston that I didn't want him to succeed either.

Also undercutting the attention is the fact that the identity of at least one of the names on the chip is obvious from the very beginning. The actions of the traitor don't always make sense either, particularly at the film's conclusion.

I enjoy a good espionage thriller as much as anyone and probably more than most. This, despite a nice turn by the always reliable Denzel and some decent action scenes, just isn't that good. 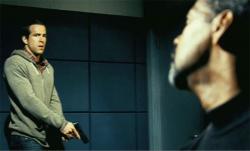 Scott mentioned that Safe House has some plot holes, and does it ever!  The first big one is when Matt takes Tobin out of the safe house, and the bad guys immediately know where he is in his car.  These guys have not laid eyes on Matt, they have no idea who he is and Tobin is in the trunk.  Still, they just know where to catch up to him on the crowded streets.

The next is the ridiculous scene at the soccer stadium.  Matt is sent to a locker to get a GPS that will lead him to another safe house.  I guess just giving him an address over the phone is too difficult.  Matt is clearly an idiot.  He has Tobin chained to a pipe in a hotel room, but decides to bring him along to the locker that is in a very crowded area.  It seemed like the director, writer or someone involved in the making of this film really wanted to feature that stadium.  Tobin escapes into a crowd of some tens of thousands of people, yet Matt finds him in mere minutes.  Why did Matt not just leave Tobin at the hotel with a gag in his mouth, chained to the pipe and get the GPS by himself?  It would have saved him a shit load of trouble.

The movie also never shows Matt taking Tobin into any hotel, or forcing him to get behind the wheel of a car.  Tobin escapes at the stadium by making a big scene and running away.  He could have done that countless times, as he knows Matt will never shoot him.   Matt should have never let Tobin out of the trunk after he foolishly got into it in the first place.

Scott disliked the lighting, as Espinosa was clearly going for a realistic look.  In one scene, Matt is saying goodbye to his girlfriend and you can plainly see every flaw in her skin.  I was not bothered by this.  I thought it was a very realistic approach.  It made her seem more human than most touched up actresses.

However, Ryan Reynolds destroys that idea.  He has beard stubble throughout most of the movie. There are many closeups where we see his facial stubble and cuts from the action scenes.  It is meant to make the boyish Reynolds look masculine.  However, he has no body hair.  So is he a tough, masculine wannabe CIA field agent who does not have time to shave his face, or a metrosexual who takes time out of his day to make sure his toned body is hairless?  Espinosa should have kept Reynolds's plaid shirts on him.

Reynolds hairless body and lack of acting skill reminds the audience that he is first and foremost a movie star and not an actor.  Matt Weston could have been an interesting character as he is so eager to get some action into his life and then when he does, he finds himself way in over his head.  Reynolds never lets us see Matt's surprise and frustration.  The writing does not help.  Once Matt shoots the innocent policeman at the stadium, I stopped rooting for him.  Once he intentionally endanger an innocent person's life he became as bad as the men he is running from.

Denzel acts circles around Reynolds.  Even though he is working with the same flawed script, he knows when to down play a scene and when to play it up.  As Scott wrote, he draws you in.  I was never sure how Tobin was going to react in any given situation, but you can see on Denzel's face that he is figuring it out.  He is far better than the material he is working with.

At best, Safe House may distract you with it's drawn out action scenes.  It takes twenty minutes to get Washington and Reynolds into the same scene, even though we know by the previews that it is where the plot really begins.  Other than Washington's performance, Safe House is at best a decent idea that got poorly executed.

An unimaginative script and sloppy editing mar what could have been a taut espionage thriller. The storyline is strictly by the numbers and predictable (the corrupt CIA official is obvious from the start). There are several glaring editing mistakes. The stadium, for example, is initially shown empty in an aerial shot, then mere minutes later is filled with thousands of fans watching a soccer match in progress. Airplanes and automobiles magically transform themselves into different makes, and a glass of wine refills itself. This movie needed another “proofread” before being released.

Like Scott, I'm not a fan of the filming style; bad lighting, jarring camera work and too many quick cuts spoils the cinematic brew. A director shouldn't remind the audience they are watching a movie every few seconds. The best thing they can do is stay out of the way and let the story speak for itself.

Denzel Washington exhibits the charisma and gravitas that has made him one of the legendary stars of the past 25 years. He communicates beautifully using just his face and body language. He is that rare talent that is an instantly recognizable icon and yet he manages to bury himself in this part at the same time. He burrows under Tobin's skin and inhabits him with an intriguing inner light. Tobin Frost, the former agent turned rogue thief, has all the makings of a classic movie character. It's just too bad the focus doesn't remain on him.

Ryan Reynolds isn't bad despite the generic manner in which Matt Weston is written (and despite what my brothers wrote). It's not an award worthy performance by any stretch of the imagination but he almost holds his own against Washington. At least up until their climactic final scene together, where Denzel mops the floor with him, talent wise. He is certainly better than mediocre.

Some of the plot holes Eric mentions can be chalked up to being simple rookie mistakes by Weston. But like him, I did notice how easily the bad guys were able to locate the car Weston makes the getaway from with Frost in the trunk. It is yet another poorly edited scene. The entire sequence at the stadium is unbelievable. There are literally hundreds of security guards but somehow Weston is able to engage in a gun battle in front of thousands of witnesses and then easily makes his escape without being followed.

Despite all of the aforementioned flaws, Safe House offers some exciting movie entertainment for anyone willing to just sit back and enjoy the ride without over thinking the plot details. Some of the action scenes are better than others. The initial attack on the safe house is done quite well and it's the scene where Reynolds does his best work. Pardon my mixed metaphors but he's clearly in over his head and flying by the seat of his pants. All things considered, Safe House is a generic thriller featuring a memorable turn from Denzel Washington. It's worth watching for his performance alone.