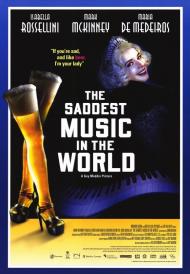 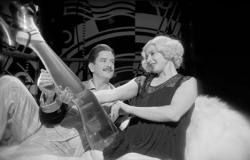 Mark McKinney and Isabella Rossellini in The Saddest Music in the World.

The Saddest Music in the World is one of the funniest and most original movies I've ever seen.

Set in Winnipeg in 1933 during 'The depths of the Great Depression' Saddest Music was shot in grainy blue-greys with an occasional burst of color; it looks like how I remember old movies on the late, late show as a kid. The sets are stagey, the dialogue purposely stilted and the camera moves around like Citizen Kane on crack. The characters are all stock types from the era yet done with a unique modern quirkiness and flair for the theatrical. The plot is both incredibly silly and histrionically tragic and features a few disturbing images as any good dark comedy should. The fact that it is a musical (of sorts) and stars one of my favorite modern actresses is just icing on the cake. I haven't enjoyed myself this much at a movie in years.

Beer Baroness - with no legs - Lady Port-Huntly (Isabella Rossellini) announces a world-wide contest to find the saddest music in the world; melancholy musicians from around the globe arrive to compete for the $25,000 prize. One of these is down-on-his-luck Broadway producer Chester Kent (Mark McKinney), along with his amnesiac girlfriend Narcissa (Maria de Medeiros), freshly returned to his native Winnipeg and representing the United States in the competition. They are joined in the contest by Kent's brother (a depressed cellist searching for his missing wife and representing Serbia) and his father (the man responsible for amputating the Beer Baroness' legs and representing Canada) and soon the three of them are embroiled in a twisted family scandal.

The scenes of the competition to determine the world's saddest music are hilarious. A buzzer sounds and a voice announces 'Mexico versus Siam'. Musicians from each country then take turns facing off like rappers in a free-styling contest. Then they play at the same time, frantically trying to out-sad each other, before Lady Port-Huntly passes judgement. To celebrate, the winner of the face-off then slides down a ladder into a pool of beer. The two radio announcers covering the contest have some of the funniest lines. At one point, introducing a group of eskimos, the announcer says something like, 'We now pay honor to the long forgotten great Alaskan kayaking tragedy of 1898.' When Kent's brother passes out after his song she says, 'We don't know if he's in a coma or just very sad'.

The movie reaches its climax shortly after Lady Port-Huntly gets her glass legs - filled with beer of course. You have to see this part to believe it. She has, by this time, become so enamored of Chester that she joins the ra-ra American entry and participates in the finale against his brother. Chester's philosophy is 'people like a little razzle-dazzle with their sadness'. Anyway a fire breaks out and the ensuing chaos brings the story to its conclusion.

The acting is all-around superb but Ross McMillan as Chester's tragic brother Roderick rises above the rest. He best embodies the essence of Saddest Music by being the most tragic character and yet the funniest. He is so incredibly sensitive in his suffering that he avoids bright lights and cries out at the merest touch of his flesh.

Until now I was unaware of the work of Guy Maddin. He is truly a unique and gifted filmmaker and The Saddest Music in the World is a laugh riot that vibrates with originality.