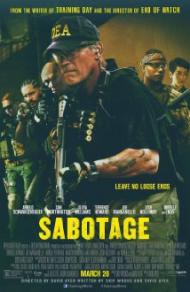 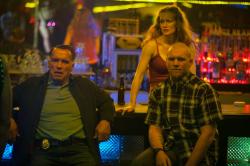 David Ayer directs films with an eye for realism. Not in plot necessarily, but in how his actors look. Very little effort was put into making Arnold Schwarzenegger appear any younger than his 66 years. Mireille Enos rarely wears any flattering makeup, revealing her less than stellar complexion. Joe Manganiello’s gray hairs dot his beard. Sam Worthington is nearly unrecognized with a shaved head and an ugly goatee. Glamour is the last thing Ayer wanted from his cast.

The movie begins with an elite group of DEA agents raiding and robbing a drug cartel’s home. The money they take quickly comes up missing but the government continues to investigate the agents none the less. One by one, the agents start coming up dead. Schwarzenegger and a government agent begin looking into the deaths, while the remaining DEA agents become more and more paranoid that they may be killed next. It is soon revealed, to what is obvious to us, that it is an inside job. Not everything makes sense but the pace and the action keeps us distracted

Like John Wayne in his later career, Schwarzenegger’s commanding presence has only grown with age. He even resembles Wayne at one point when he wears a cowboy hat and gets into a shootout in a bar. Schwarzenegger is hardly in the best shape of his life but his acting is, for better or worse, as good as it has ever been. Sure, he is not required to do much but he plays every scene with enough conviction. Also like The Duke, we never forget that we are watching Schwarzenegger. His most memorable line is when he is being interviewed by two government suits and yells at them, “Don't fucking scream at me you money fuck, you. Look at you! With your fucking 48% body fat! And you, you scrawny little bastard! Fuck you guys!”

Perhaps it was because of all the bad reviews Sabotage received on its theatrical release but I was pleasantly surprised and entertained by it. If you know Ayers work, you know he likes dark characters and deadly subjects. This is not a light, Expendables type of movie and does not want to be. A couple of times I wanted to turn from the screen as what was being shown was kind of hard to witness. Sure, several of the killings are over the top but some carry legitimate emotional weight. Death is never pretty and Ayer thrives on showing us the ugly.