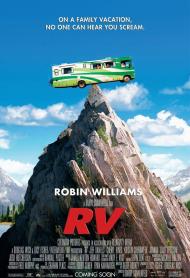 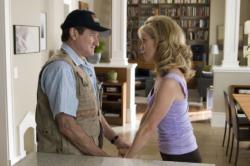 A father out of touch with his wife and kids is a horribly old cliche. Robin Williams already played that role in the miserable Hook. A family reluctant to go on vacation with their father was done far better in the Vacation movies. A teenager rebelling against spending time with their parents should be considered too predictable to even be a plot device. R.V. is about as generic as a movie can get.

The Munro family is planning a vacation to Hawaii but the dad, Bob, changes the plan to an R.V. trip to Colorado for some family bond time. Actually, he has a business meeting in Colorado that he cannot get out of, so he does the only logical thing. He lies to his family.

Bob and oldest daughter Cassie are butting heads for no other reason than she is a teenager and has an attitude. Son, Carl, is insecure about his height. Mom, Jamie, has even less personality than her kids. Together they roll their eyes and make fun of Bob for the first third of the movie.

A bright spot shows up in the form of the Gornicke family. They are an R.V. loving family that lives in their R.V. traveling the country. The kids are home schooled and they like to break into song when they can. They also like to tell stories such as when Mary Jo Gornicke, who dresses like Erin Brocovich, asks the Munro's, “Do you wanna hear about the time Jesus saved us from a tornado?”

Unfortunately, the movie centers more on the Munro's than the Gornicke's. So instead of having the two opposite families bounce off each other, we have Robin Williams doing slapstick comedy. Correct me if I'm wrong, but is not William's comic charm in his rapid dialogue and not in imitating a silent film comedian's prat fall? The only time this movie has any spark of life is when the Gornicke's are on screen. Not only are they good for a laugh, but it gives Williams the opportunity to throw out lines, such as when Travis Gornicke picks up his instrument and is about to sing and Williams says, “Whenever a big white man picks up a banjo, my cheeks tighten.”

It is never good for the supporting cast to steal the movie from the stars. After all, if they get all the laughs then the movie might as well have been about them.