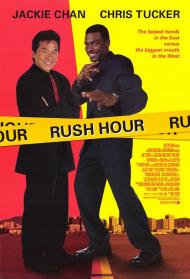 I saw Rush Hour 2 prior to seeing Rush Hour . The effect was that I liked the sequel better. I know, sequels tend to be worse. My theory is that they are not. Its just that after seeing the first movie we all have our own ideas about what the characters are like and what we think they may go on and do. Rush Hour is an action flick. The characters are fairly one dimensional. You miss no character development by watching them out of order.

The thing that makes the second one better than this one is that here we have to see them meet for the first time. First Detective Lee, a Chinese policeman is introduced fighting bad guys in China. Then we have Officer Carter. An LAPD officer capturing a bomb dealer. Then through some unimportant plot devices they finally meet after about a half hour into the movie. Now anyone who has seen these movies knows that the best thing about them is the two character's chemistry. So the second movie has more of them together, and thus is a better movie.

This one, like the second, moves along quickly with plenty of action. Also like the second, the best scenes are when the two leads are sharing screen time. These two buddies have more charm than those two cops from the Lethal Weapon series. In those movies Glover was simply the serious, straight man to Gibson's nutty character. In Rush Hour either character is the funny one. It just depends on which character is in the more familiar territory.

Jackie Chan and Chris Tucker create movie magic whenever they are together on the screen. Their comic chemistry is a thing of beauty. They are an odd couple yet their differences compliment each others. Tucker's motor mouth and Chan's unique brand of physical comedy provide plenty of entertainment bang for your buck. I do agree with Eric that Rush Hour 2 improves on this first movie but only slightly. They both have run of the mill plots that are really just an excuse to get the 2 stars together in action scenes.

When the young daughter of a Chinese Consul learns she is moving to California she is reassured by Jackie Chan's Inspector Lee. He tells her, “And don't worry, America is a very friendly place.” The action then cuts to Chris Tucker driving on an L.A. freeway and shouting at a fellow driver, “Stupid fool get the hell out of my way!”

Before you know it the little girl gets kidnapped. In my favorite scene she is riding in a limo on her way to her first day of school in America. She is wearing headphones and listening to Mariah Carey's "Fantasy" and singing along at the top of her lungs. The actress playing this little girl is wonderfully unselfconscious. A police officer pulls them over. The driver asks if there is a problem and the (fake) cop replies, “No problem. Just rush hour.” He then proceeds to shoot the girl's 2 bodyguards.

Carter is at first assigned to keep Lee out of the way but before you can say Beverly Hills Cop the two of them are working together to save the girl and solve the crime. There is a nice sequence where Lee tries to evade Carter. It begins at Grauman's Chinese Theater on Hollywood Boulevard where Carter shows Lee John Wayne's handprints in the famous cement courtyard. Chan quickly makes his escape in traffic. Jumping gracefully from moving vehicle to moving vehicle like he's Gene Kelly in Singin' in the Rain.

Rush Hour has nuggets of comedy gold. Check out the Beach Boys conversation or Chan's rendition of "War". Chris Tucker's incredibly memorable speaking voice and hilarious way with an insult combined with Jackie Chan's whimsical physicality make Rush Hour much better than it really deserves to be.

As my brothers pointed out, in this and their reviews of later films in the series, the best thing Rush Hour has going for it is its two leads and the oddball chemistry they share. The partnership of Chan and Tucker works extremely well despite the fact that they weren't the producers first choice for the roles. The role of Carter was first offered to Eddie Murphy, then Dave Chappelle and Martin Lawrence before finally going to Tucker.

Eric mentioned the Lethal Weapon series and the comparison is an obvious one. Both films take place in Los Angeles and both feature an interracial pairing of police officers, with a central crime to investigate that you could easily see Riggs and Murtaugh investigating. While I do agree that unlike those Gibson/Glover films, both Chan and Tucker generate laughs, it is clearly the motor mouthed Tucker who is the main comedian to Chan's more serious straight man.

Chan, as Patrick wrote in his Rush Hour 2 review, is reminiscent of a silent film star. His physicality and slapstick humor is a throwback to the early days of Hollywood, a feeling that's augmented by the Los Angeles setting. With his leaps, pratfalls and Kung Fu, he's a combination of Buster Keaton and Bruce Lee. His near silent shtick is the perfect compliment to Tucker's verbal diarrhea. It's always amusing to watch the end credits of his films with the outtakes that show his onscreen catlike reflexes take many, many takes to perfect.

The plot is formulaic and the identity of the mastermind villain is obvious from the moment a well known English actor shows up in what looks like a small, throwaway part. As my brothers wrote though, it hardly matters. The only point of the plot is to come up with an excuse to get Chan and Tucker together so that they can do their thing. Together they make this B-Movie into an A-1 partnership. 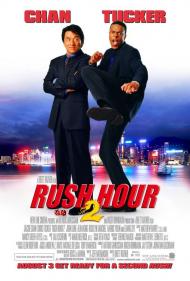 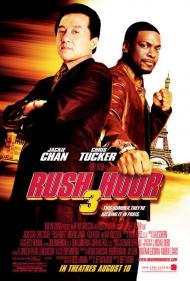