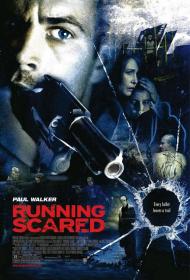 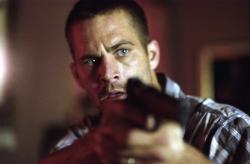 It is never a good sign for a movie when the only way you can understand it is if the film makers themselves have to explain what is going on. If an audience cannot figure it out then the entire point of the film is lost. Running Scared is at first just a violent, foul language, blood filled movie. Then on the DVD extras it is explained that this movie is a Grimm's Fairy tale. Grimm's stories usually involved children in dark, dangerous situations and in Running Scared you have the same. Even though some of the movie seems very surreal, I doubt if the Fairy Tale allegory is obvious enough. A medicine bottle has the name Hansel on it. Woo Hoo!

Mob connected family man Joey is given the job of disposing of some guns recently used in a shootout with some undercover dirty cops. His son and his son's next door neighbor best friend, Oleg, see him hide the guns in his basement. Oleg takes one of the guns and shoots his abusive; John Wayne obsessed stepfather and runs off. The mob is now pissed that the gun that can attach them to the shootout is out and about. The dirty cops want the gun as evidence and the wounded step father has ties to the Russian mafia. Oleg spends the night dealing with drug dealers, pimps, prostitutes and in the most bizarre subplot, a couple of pedophiles.

The movie constantly throws stuff at the audience. This kid walks from one bad situation to another. If a Grimm's Fairy tale was the inspiration for this movie then more references should have been made to that fact. As it is, this kid goes through so much and yet maintains his composure throughout. It is completely unrealistic. Which is fine for a fairy tale but it is never played up enough to be one. It is all done in a very realistic, however implausible, manner.

It was nice seeing Paul Walker in a different role. He plays a married father caught up in something completely out of his control. The plot twist at the end involving his character explains a few things as well as marks this as more of a Walker type role than we first believe. The ending also renders much of the movie moot.

Running Scared is over-directed. Too much artistic licenses were taken with the editing and camera work. We watch movies to see stories and be entertained, not how different the director can be. Whenever a film stops to remind me that I am watching a movie demonstrates that the director has done something wrong.