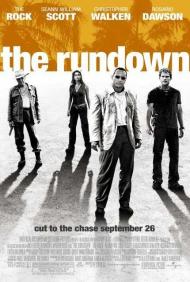 Dwayne Johnson in The Rundown.

It is always disappointing to watch a movie that could have been better. You wonder why the director didn't choose a better way to show something, or why he chose to do it a certain way. This is the case with The Rundown.

The Rock stars, charmingly enough, as a bounty hunter, Beck. He is sent to Brazil to retrieve a mobster's wayward son, Travis, played by American Pie's Sean William Scott. Travis is in the Amazon jungle looking for an ancient artifact. Picture his character as Dumb And Dumber meets Indiana Jones. Before you can say 'cliché', the two team up and join forces with a hot rebel chick. Together they search for the relic and do battle with one of the silver screens greatest psycho actors, Christopher Walken.

All of this sounds like fun, and it is to a degree. If only Director Peter Berg had more comic flair. In one very stupid scene, Walken is trying to make a point by talking about the tooth fairy. It is supposed to be a funny scene, but it fails completely. Early in the movie, Beck arrives in the Amazon aboard a rickety old plane being held together by duct tape, Other than having Beck off handedly ask, 'Is that duct tape.' The scene is not played for laughs. A missed comic opportunity. However, the pilot of the plane is an extremely thick accented Scotsman. Every line he speaks is hilarious.

The Rock and Scott have good 'buddy' chemistry. They bounce off each other well. Scott is still playing Stifler. Only this time he has a beard. The Rock is a competent actor. Early in the movie, he has to extort some money from some one and you can see on his face how much he really doesn't like doing this.

An interesting moment happens in one of the first scenes in the movie. The Rock is walking into a nightclub and Arnold Schwarzenegger walks past him and says, 'Have fun.' I guess the action film star torch has been officially passed. The Rock does not have the full screen presence of Arnold, but he comes across well and is not nearly as campy as Jean Claude Van Damme. 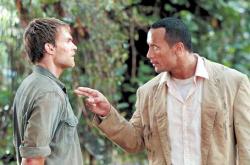 Seann William Scott and Dwayne Johnson in The Rundown.

I agree that The Rock and Seann William Scott have good chemistry together. It is almost homoerotic. The scene in the jungle where Scott's hands are handcuffed and he has to take a pee and asks The Rock to give him a hand is hot.

Yes the movie could have been better but I think it succeeds at what it set out to do. It is mindless entertainment. Eric mentioned that Arnold Schwarzenegger makes a cameo appearance, I think The Rock is more like John Wayne. He is the strong silent type and 100% all American.

Christopher Walken hams it up great as the bad guy. He has become a parody of himself like Peter Lorre in his later years. Still he adds to the movies' campiness.

The Rundown is an old-fashioned action/adventure movie but with a modern-day cast and 21st Century cinematic effects. Great matinee material. 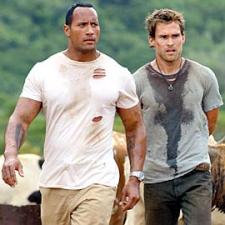 The Rock makes Seann William Scott his bitch by keeping him in handcuffs.

I guess they could have gone for more laughs in this movie Eric, but if they'd gone too far in that direction I think it would have harmed some of the tension. Not that there's too much tension, but the action scenes are already so far over-the-top that the movie needs all the seriousness it can get to try to keep it grounded, even if only the tiniest bit.

Clearly Dwayne knows his audience and is playing to his strengths here. The fight scenes all resemble wrestling matches. They're well choreographed and full of violence, but not very believable. Fortunately Dwayne has enough likable charisma that he can pull them off without being annoying.

With its fairly predictable plot, about the only thing going for this movie is the double-act of Johnson and Scott. Both of them are playing their stock characters, but it suits them and they compliment each other well. The scenes of the two of them bickering and fighting are the best scenes.

It's funny Patrick, but the homo-erotic angle never really occurred to me, but now that you put it out there, I can't help but think how there are no romantic scenes between Rosario Dawson's character and Johnson's. In fact, she's playing a fairly masculine character herself. Some kind of subtext? I tend to doubt it, if only because that would mean this movie has layers, which would be giving it more credit than it deserves.

Thanks to the likability of the two leads and the hamminess of Walken added to a fast-paced plot with plenty of action, this is a movie that never bores. It's a B-movie for sure, but a fairly decent one.