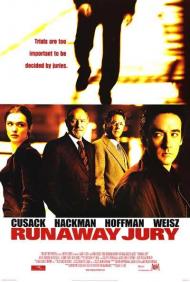 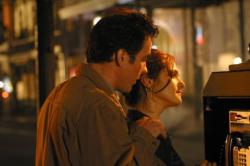 Anytime you go to see a movie adapted from a John Grisham novel there are several things you can safely expect. You can be confident that it will take place in the south, it will be a courtroom drama pitting an underdog against an all powerful adversary, and at some point a large sum of money will be wire transferred to a bank account in the Cayman islands. Runaway Jury, this latest Grisham adaptation, fits that bill nicely. And although it's familiar ground for those familiar with this type of movie, it is nevertheless, highly entertaining.

When Nick Easter (John Cusack) gets a summons to jury duty, he reacts, as most of us do, with reluctance and a fervent desire not to get chosen for the case. Since it would be a very short movie if he weren't chosen, it should come as no surprise when he is. The case is that of a widow of a murdered man, suing a large gun manufacturer for negligence in monitoring their assault weapons sales and thus contributing to the death of her husband. For the plaintiff, is down to Earth southern lawyer Wendell Rohr (Dustin Hoffman and his theatrical accent). Arrayed against him is, not only an opposing attorney, but also Jury Consultant Rankin Fitch (Gene Hackman at his slimiest, so-bad-you-like-him, best). With all the firepower against Rohr and his client, it would seem like a doomed attempt, but there is, of course, more to this case than meets the eye.

While Fitch is using all of the modern electronic surveillance equipment and detective work he can, to learn everything about the jury and potential weaknesses he can exploit, Rohr is depending upon the old fashioned goodness of people. Unbeknownst to both of them, there's a ringer on the jury. Easter, who it turns out, actually wanted on the jury, along with a girl on the outside, Marlee (Rachel Weisz), is working to make the jury available to the highest bidder. What follows is a fast paced thriller as Fitch battles wits with Marlee, and Rohr battles with his conscience to decide the fate of the case.

In the original novel, the court case involved the tobacco industry instead of the gun industry, but in real life, since the time of the book's publication, court cases have been won against tobacco companies, and so the adversary had to be changed. This might put off fans of the books or strong gun-rights proponents, but needlessly. The movie is quite enjoyable regardless of who you want to see win the case, although clearly Rohr is portrayed as the good guy and the gun executives are all stereotyped as soulless idiots. The excitement and tension of the plot are great enough that you won't have time to weigh the actual merits of the case. In fact, for a courtroom drama, much of the action takes place outside of the courthouse. The real drama is played out between Fitch and Marlee as they battle for control of the jury, with Easter on the inside trying to gain his fellow juror's confidence so that he can deliver the verdict, whichever way he has to, by the end of the case.

The greatest strength of this movie is its cast. Gene Hackman and Dustin Hoffman both give great performances, although it is Hackman who walks away with the movie. Their one and only scene together is a classic as they verbally spar back and forth. Cusack and Weisz are also both good, even though neither of their roles calls for much stretching of the acting muscles. Weisz, as the scrappy Marlee, is particularly a treat to watch.

As the court case moves along, various mysteries and plot threads are woven together, leading up to the big finish with the requisite plot twist, which, while not perfectly original or unexpected, is satisfying and entertaining, right through to the credits. 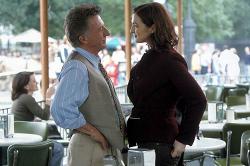 Where I agree with Scott that this is an exciting court room drama, I do argue that the ending is not. To sit through this thrilling, spinning plot only to find out that it is all about lofty liberal ideals was a complete let down. I would have been happier if it had all been just about the money.

If we can sue a gun manufacturing company for an unrealistic amount of money, then you can sue Ford the next time you get rear ended by a Focus. According to this movie and the liberal mindset, people are never responsible for their actions unless they are rich.

This movie might as well have been directed by Michael Moore. The gun company and every one associated with them are all out for the almighty dollar, or are "souless idiots," as Scott wrote. Everyone on the opposing side seem as saintly as possible. After the "good guys" get the money they tell "bad guy" that they will give the money to the victim's families. Apparently it is wrong to make a legal product that someone else chooses to use in a bad way, but extortion is perfectly fine.

Excluding the liberal bias of the plot, I have to say that this is a good movie. The dialogue is crisp and well delivered. Like Scott, I relished the scene between Hoffman and Hackman. These two old pros do a great verbal tennis match. That one scene is the greatest moment in the film.