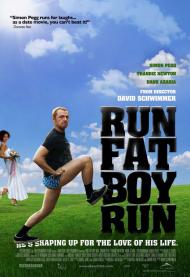 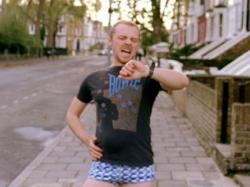 Being a fan of Simon Pegg's ever since Shaun of the Dead (and subsequently Spaced and Hot Fuzz), I was eager to see this movie, even though it wasn't directed by Pegg's usual collaborator, Edgar Wright, nor does it feature his frequent cast mate, Nick Frost. It starred Pegg, promised to be a comedy and that was good enough for me.

Pegg stars as Dennis, a hapless soul, who (despite the title), isn't really fat, just out of shape. The movie opens with him running away from his own wedding, leaving his pregnant bride-to-be (Newton) practically at the altar. Flash forward a few years and Dennis is depressed, living alone, and filled with regret over his actions on that day. His ex, Libby, has moved on. She's dating a successful American; Whit, played by Hank Azaria. Although Dennis gets to spend time with his son, Libby has custody. In a fit of competitiveness with Whit, Dennis states his intention to run in a marathon. Eventually this turns into something more, where completing the marathon becomes symbolic of Dennis's attempt to get his own life back in order. If he can just finish the race, he hopes, then he will prove to everyone, including himself, that he can commit to and finish something worthwhile in his life.

Unlike Pegg's other work and the more typical style of British humor, this movie has heart on top of the laughs. This is probably due to American director, David Schwimmer (yes, of Friends) and American screenwriter Michael Ian Black of the State Comedy Troupe and about a bazillion VH1 tribute shows. American comedies, and I don't mean this as a criticism per se, do tend more towards sentimentality. They tend to have sympathetic lead characters, which isn't always true of British comedies. In any case, the mood works here, which helps because the laughs in this one aren't really of the fall down laughing kind, although there are a few such moments, many of them supplied by Dennis's best friend played by Dylan Moran.

Once I became accustomed to this change of comedy styles for Pegg, I found that I enjoyed this movie a lot. I imagine it will do only small business over here in theaters, where Pegg isn't nearly so famous. But even if you don't get a chance to see this one in the theaters, give it a chance when it comes out on DVD. I think you'll be pleasantly surprised. 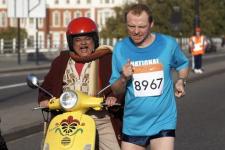 Although I am hardly the Simon Pegg fan that Scott is, I do appreciate his lovable loser screen persona. With his thinning hair and vacant expression, he always looks like he has been short changed by life and is trying desperately to catch up with everyone else.

The movie starts with Dennis in a panic, because he is engaged to the beautiful Libby. He should have been thanking God, her parents and anyone else in the world who may want to listen, for Libby being in love with him. Dennis is likable but also very insecure, unaccomplished and quite frankly, dull. Why Libby loves him is never even attempted to be explained. Nor is it explained why Dennis would not want to marry a gorgeous, impossibly sweet woman.

The movie opens without an ounce of sincerity and then runs further and further into sitcom land. Dennis lies about being in the marathon to impress a woman who was going to marry him, even though she already knew his shortcomings. Dennis gets caught in the lie and goes through with the run anyway. This premise of having to do something out of character to keep up a lie has been done in television shows since I Love Lucy.

Dennis and Libby do not make sense as characters. Azaria as Whit fairs no better. At first he is the successful, confident American who then suddenly feels threatened by Dennis. He responds to Dennis’s attempt to impress Libby in a standard sitcom way. This movie could have been a episode of Friends where Ross is trying to impress Rachel by competing with her boyfriend in a race.