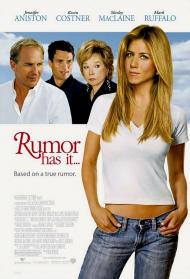 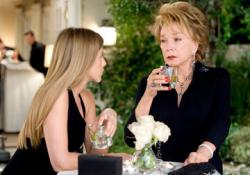 Jennifer Aniston and Shirley MacLaine in Rumor Has It.

Rumor Has It features a great cast doing some terrific work with a so-so script. While even they can't raise the material much, they do help to create a light and amusing film that does entertain.

Sarah Hettinger (Aniston), recently engaged and having a bad case of cold feet, flies home to Pasadena for the wedding of her younger sister. While there she learns that her family was the basis for the movie The Graduate. Always feeling as though she never quite fit in with her family, she seeks out Beau Burroughs, the man whom Dustin Hoffman's character was based on, to see if he might be her real father. When Beau (Costner), tells her that there is no way that he could be her father, because he's been sterile since his youth, Sarah ends up sleeping with him following a drunken night. Like her mother and her grandmother before her, Sarah must now deal with the consequences of that act.

Aniston, who seems stuck in the romantic comedy mold, does a fine job in the lead role. And Costner, whose career seems to be on the rise again, is equally good as Burroughs. His charm has aged as gracefully as he is doing. And Ruffalo, who is an actor whose star should be on the rise, does a terrific job in the thankless role of the long suffering fiancée. However, it is Shirley MacLaine, as the tough talking grandmother and the inspiration for Mrs. Robinson, who steals every scene that she is in. Not only is she hilarious, but she looks damn good for a 71 year-old.

While the movie does try to throw in some drama, the story definitely works best as a comedy. This isn't do to a lack of talent from the cast, but rather the weakness of the script, which fails to draw you in enough to make you care seriously about the characters. They work best as comedic characters rather than dramatic ones. And that's the movie's biggest problem. It's not funny enough. The premise and the previews, which feature the movie's best jokes, promise a very funny movie, but in reality it's only amusing at best.

The movie also fails to capitalize upon its Graduate connections. This should have been another source of comedy, if only by recognition, but this is another avenue that it fails utilize.

In the end, Rumor Has It is a lightweight comedy that almost works. However, there's nothing compelling about it to make it a must see film. You'd do just as well with it if you waited until it was available on DVD. 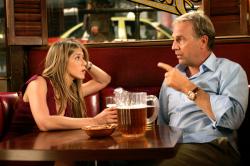 Jennifer Aniston and Kevin Costner in Rumor Has It.

Rob Reiner seems to have lost his touch. I can't remember the last good movie he directed. This one sure as hell ain't it. Like Scott said it is only mildly amusing at best. Every joke and plot wrinkle can be spotted a mile away. And the feel good ending has about as much emotional kick to it as a bad sitcom.

I do agree that the cast is much better than the material. Although to be honest I have never appreciated Aniston's charm. She is too bland to be charismatic and too tame to be truly funny. I agree that Shirley MacLaine steals the movie hook, line and sinker. It's just too bad she has to deliver lines like, "Go away and play with your dick." or "I'm freezing my nuts off out here." Still she is a true movie star and it is great to see her continuing to work. 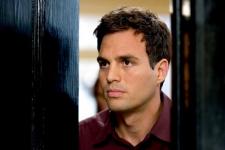 Mark Ruffalo has less screen time, but is more convincing than Aniston.

Just as in The Graduate, it is the older woman who gives life to the movie. I like Maclaine's first line to Jeff, “You are a lawyer. Full of shit!” Unfortunately, Maclaine is only in a few scenes, leaving the beautiful, but charmless, Aniston to carry the movie.

For so long, audiences have waited for Aniston to break out of her shell and become a real movie star with that magical quality that lights up a screen when she is on it. Alas, I have stopped waiting. She is attractive and pleasant enough to watch but she does not have IT. Her best work may very well have been on Friends. She certainly does not have the charisma to carry a movie. Even with such great support as Maclaine, Costner and Ruffalo, she is still unable to make us care about Sarah or her situation.

The best relationship in the movie is the one between Beau and Katherine, but they only get one scene together. Katherine walks out of the house to confront Beau. Spaghetti Western music plays as to foreshadow a showdown. However, Reiner cuts the scene short when he should have let them spar several more rounds. It is the most sparks this movie generates.