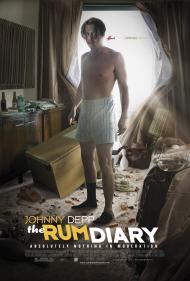 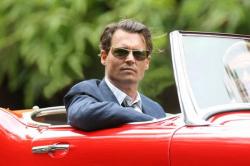 Johnny Depp in The Rum Diary.

Johnny Depp returns for a third time to what has become his cinematic alter-ego. A character based on Depp’s friend, the late Hunter S. Thompson. A younger Depp played the older, baldheaded, cigarette-holder using Thompson in 1997’s Terry Gilliam directed Fear and Loathing in Las Vegas. Earlier this year he voiced an animated caricature of the writer in Rango. Now a slightly older Depp is playing a much younger Thompson in The Rum Diary, based on an early unpublished novel that was given to Depp by the Gonzo writer and finally published a few years ago.

The movie opens with journalist Paul Kemp’s flight into San Juan, Puerto Rico while Dean Martin sings over the opening credits. The year is 1960 and Kemp (the Thompson surrogate) has taken a job at a dying newspaper and is soon having mildly amusing (and as the title suggests) alcohol soaked misadventures with fellow expatriate newsmen and run-ins with the colorful locals.

The breezy opening belies the slow pacing of the movie. There are some genuinely funny moments (most of which were given away in the trailer) as well as a dash of danger and a whiff of adventure, but the plot is really just a series of anecdotes strung loosely together. The ending is a long time coming and lacks any real resolution.

Depp has always been best when he loses himself in an unusual character. He is essentially a character actor in a leading man’s body. Here he basically plays straight man to the assorted menagerie of people he encounters over the course of his time spent in Puerto Rico. He does a decent job but never gets to exhibit much range.

Of the supporting cast the funniest moments come courtesy of Giovanni Ribisi as Moburg. He’s a fellow journalist with poor personal hygiene who has drunk himself half/mad. His record collection includes Adolf Hitler speeches which he likes to play at odd times.

The movie makes a few halfhearted attempts at being political. Richard Nixon is shown on television and there is the requisite slimy capitalist on hand played by Aaron Eckhart. The Rum Diary has its moments but don’t be surprised if you walk out of the theater feeling like you’ve just finished a weekend of binge drinking. You may have a headache and not remember much of it the next day. 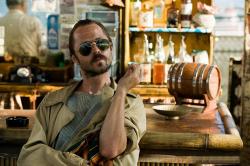 Giovanni Ribisi in The Rum Diary.

Rum Diary is a movie in search of a plot. As you said Patrick, it's really more a series of anecdotes than a cohesive story. It begins with Kemp's arrival in Puerto Rico and ends with his leaving, but it lacks a real sense of closure or sense of any kind of journey. We're told that the whole adventure has been a revelatory one for Kemp, but there's very little evidence of such.

Part of the story's problem is that it lacks a good antagonist. Aaron Eckhart is supposed to be the bad guy, but what's he doing that's so bad? Okay, so he's a bit rude to the locals, but his big crime - the one that's supposed to launch Kemp on a career of crusading against bastards - is simply some inside knowledge about a real estate deal.

I also never really found Kemp all that charming or likable. He drinks and drugs himself through his time on the island, supposedly while harboring some nobler feelings, but they're only ever half-formed and not well articulated. I certainly never believed in or felt any emotional investment in the love story angle he shares with a very beautiful, but 23 years his junior, Amber Heard.

Ribisi definitely provides the movie's funniest moments. His Moburg is extremely odd and often funny. He steals his few scenes.  Likewise Michael Rispoli as the more experienced reporter who shows Kemp the ropes is amusing and funny. Both Ribisi and Rispoli demonstrate more character and humor than Depp does who is indeed playing the straight man.

This movie does have its moments, but they are far too few and with way too much time in between them. 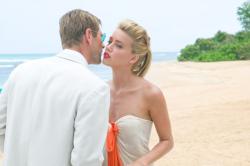 Aaron Eckhart and Amber Heard in The Rum Diary

I have never been a Johnny Depp fan. He has always mistaken his own charm as talent.  In a 2004 Playboy interview, he said,  "Do I consider myself a movie star? I consider myself a guy with a good job, an interesting job."  His anti-movie star, movie star persona is more obnoxious than clever.  I agree with Patrick's description that, "He is essentially a character actor in a leading man’s body."

Depp has bad mouthed The United States, and lives in France.  In 2003 he was quoted in the German magazine Stern. saying America was "like a dumb puppy" and a "broken toy,"  He also said he would urge his children, who are growing up in France,  to explore it (The United States) and then "get out."  He has  had to answers questions about his anti-America comments many times, of which he always backtracks.  I liked when Kemp is called, "...a waste of human sperm."  With such a negative opinion of Depp, I had no interest in watching The Rum Diary.

This film does have a a political/environmental slant.  When Kemp sits on a pristine beach after learning it is to become a hotel resort, he says, "Oscar Wilde once said, "Nowadays, people know the price of everything, and the value of nothing."  The worst quote of all is when a rich white guy says, "There's no such thing as a liberal. A liberal is a commie with a college education thinking negro thoughts."   The Rum Diary even takes a poke at the religious, "Human beings are the only creatures on earth that claim a god and the only living thing that behaves like it hasn't got one."

Needless to say, I found damn little to enjoy in The Rum Diary.  The joke in the car with Depp riding on another guy's lap was too obvious to be funny.  Ribissi acts odd. "My witch doctor.  She's a hermaphrodite."  Aaron Eckhart looks like leading man.  Amber Heard looks hot.

The worst cast member is Johnny Depp.  He tries to look younger than he is.  He has a mighty close shave on his face and chest.  Hunter S. Thompson was 23 years old in 1960.  Depp was 45 when he filmed this.  The picture of Hunter at the end looks more like Chris Evans than Johnny Depp.