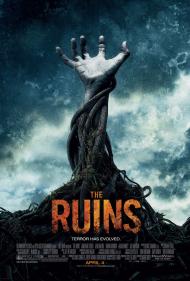 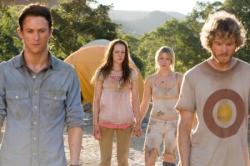 "The Ruins," by Scott B. Smith was one of the best reviewed books of the year it was published and Smith wrote the screenplay for this film as well.  He had already wrote the screenplay for his book "A Simple Plan."  I enjoyed that novel and movie, but never got around to reading "The Ruins" and did not see the film on its initial release.   Although this is a watchable film, I imagine the book must be better.

Amy and Stacy are two college best friends on vacation in Mexico with their boyfriends Jeff and Eric.  All they have accomplished is laying around the pool and beach, when they meet a man named Mathias, who tells them of some old Mayan ruins that is not open for tourists.  Apparently Mathias's brother went there with a archeologist he recently met.  Jeff, the med student who had been wanting to sight see the whole time asks, "So what do you guys think: Ancient Mayan temple off the beaten path?"

They should have stayed on the worn path, or just stuck by the pool.  The four friends, Mathias and another guy they picked up for obvious script reasons, take a jeep ride and a hike into the jungle where they quite easily find the hidden ruins.  No sooner do they find them, some Mayans show up, kill the extra guy and force the rest to walk up the pyramid and stay there.  The armed Mayans camp out around the base of the pyramid.   "We're being quarantined here. We're being kept here to die."

On top of the ancient vine covered pyramid is a tent and some old equipment.  Some one had been there before but other than an ominous opening down into the pyramid, there is nothing of interest.  As this is a horror story, you just know someone will go into the ruins.  There are several scenes of gore as the friends start dieing off.  The worst for me was when a girl cuts herself.  eeeuuuww!

We soon find out what the threat is and it raises such questions as, "Why don't they just burn the place?"  We learn a little about the friends, but not enough for us to really care.  The dialogue is simple.  Amy asks, "Do you think they're going to find us?" Eric answers, "Honestly, I think making a run for it is our only chance."  I imagine the book has to be better as several scenes has a person by them self in a dark place.  Reading about their fear would have been better than listening to these girls constantly scream.

The ancient pyramids of Mexico have long fascinated me and I had high hopes for this film.  It kept my interest, but I never really cared how it all ended. A bunch of young adults trapped in a dangerous situation is a very old horror film cliche.  The only thing unique here is where they are trapped.  I guess I should have just read the book.