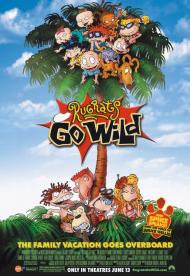 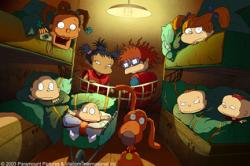 Having the Rugrats meet the Wild Thornberrys is a unique and genius idea. Nickelodeon combines two of its more popular shows to make one entertaining movie. Not only that, but you can smell the movie too.

The Pickles family and friends all head out on a cruise. They get stranded on an island where Nigel Thornberry and family are staying while they film an episode of his television show. Nigel is Tommy's hero. While the parents bicker and attempt to build a shelter Tommy leads his friends through the jungle looking for Nigel. Bratty Angelica hooks up with snotty Debby Thornberry while the perpetually sweet Eliza befriends Tommy's dog Spike.

Spike, voiced by Bruce Willis, is the brightest spot in this movie. Eliza, of course, can speak to animals, so Spike tells her he is looking for his babies. That is when he is not busy talking about sniffing butts and marking his territory.

The film is typical Rugrats. The babies run amuck while the parents act like kids themselves. Chucky is still a scaredy cat. Tommy is still the sensitive one. However, twins Lil and Phil make a life altering decision. They decide to stop eating worms forever. Phil has a hard time breaking the habit, but his sister is there to give support.

If you can get a card at your theatre or a participating Burger King you can smell the movie. The movie will flash a number on the corner of the screen and you are to scratch the number on your card. You get the delight of smelling everything from Debby's root beer to Phil's feet.

If you like the shows, you will like the movie. Don't worry if you don't care for them but your children do. The movie is fairly short and quick paced. I am not a huge fan of either show so I was delighted at the pace and length of the movie. The movie makes some attempts to appeal to adults with references to Titanic, The Poseidon Adventure and even the original Planet Of The Apes movie. Still, this is a kid's movie and despite some attempts at suspense the adventure is as quaint as can be.