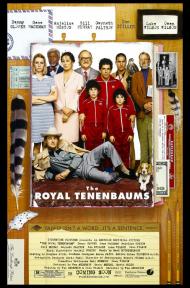 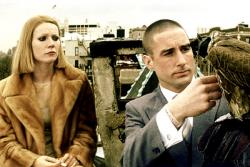 Gwyneth Paltrow and Luke Wilson in The Royal Tenenbaums.

The Royal Tenenbaums is a sweet and gentle movie, a quirky comedy/drama with a sterling cast. It tells the story, quite naturally, of the Tenenbaum family, covering twenty odd years in their lives.

The particular details are not as important as the very rich characters who inhabit this endearing world. Gwyneth Paltrow, Ben Stiller and Luke Wilson play the three grown children of Gene Hackman and Angelica Huston. Each was a child prodigy who developed into very neurotic adults with their own emotional baggage.

Gene Hackman shines brightest in this brilliant ensemble, he imbues the selfish yet lovable Royal Tenenbaum with dignity, a constant twinkle in his eye. Gwyneth Paltrow continues to impress with her range. Here she plays depressed, expertly balancing humor with pathos. Her character is very private. So much so that she has been a cigarette smoker for 22 years without anyone else in the family knowing.

Perhaps there is a bit of a tug of war between the comedic and dramatic aspects but given the dysfunction of this family it seems to make sense. And it doesn't matter that in the end The Royal Tenenbaums turns out to be another 'feel good' movie. With a script this intelligent and witty and actors this talented you can't go much wrong.

Gene Hackman in The Royal Tenenbaums.

As any fan of Salinger could tell you, the Tenenbaum family bears more than a slight resemblance to J.D.'s fictitious Glass family. A family of childhood prodigies, now grown, trying to deal with life after the success and celebrity has ended. Where this story differs, is in it's humor. While it's not a laugh out loud movie, as the previews and marketing seem to indicate, it is instead, humor more along the sly, subtle, and biting kind.

Patrick refers to the dysfunction of the Tenenbaums and he is right. Each member of the family, with the possible exception of the mother, Ethel, played by Angelica Houston, is completely self-absorbed and wrapped up in their own little world with out concern for the other members. When Margot (Paltrow) discovers that her brother Chas (Stiller) has moved back home because he's concerned for his and his children's safety since the death of his wife and is possible having a nervous breakdown, instead of showing concern, she asks, "Why is he allowed to do that? I want to move home, too." and not, "Is he all right??". When Royal (Hackman), in what seems to be a bid to regain his children's love, suggests they make a family visit to the cemetery to visit his mother's grave, Margot, the adopted daughter, says that she's never been. To which Royal replies, "Well she wasn't your real grandmother anyway." Or when, in flashback, Royal shows up late for a play, missing most of it, written by Margot, and starring all of the Tenenbaums as children, when asked what he thought of the play, replies, "That it wasn't believable." Even when lying about what he thought of the play, his first instinct is to put it down, rather than encourage. And finally, even when Richie (Luke Wilson) confesses his love for his adopted sister Margot, they both fail to do anything about it and seem more concerned with how it affects themselves rather than each other.

The genius of this movie is that despite these selfish and self-absorbed antics, as exemplified by Hackman's marvelous performance, is that you still find yourself drawn into the world of the Tenenbaums and find yourself caring about each one of them. This is in large part due to the cast of actors who bring this family to life, but also because of the marvelous script.

This movie is also filled with little moments and symbolism. Is it a coincidence that the family name means Christmas Tree? Which I took to mean, and this is just my impression, that this family, like Christmases, was better in the past, when they were children. And then there is Richie's bird, which he let's go and it returns to him later, only changed and now with more gray in it's feathers. Could it be representing Royal?

It's somewhat rare to find a movie that can make you laugh, feel sad, and make you think. That's why it is such a pleasure when you find one that does all three as The Royal Tenenbaums does. 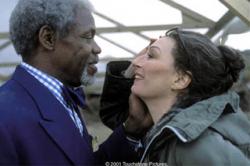 Danny Glover and Anjelica Huston in The Royal Tenenbaums.

More often than not, as soon as I get to know someone, at even the meagerest of personal levels, I discover that they came from a dysfunctional family. One friend was raised by a single mom. He has a half brother and he has never met his father. Another friend's parents are divorced and does not speak to his siblings due to petty arguments. Yet another friend was raised in a family where the mom was religious but the dad was not. All of these people and many more would say they were from a dysfunctional family. We all come from a family that has problems and idiosyncrasies.

Are the Royal Tenenbaums a dysfunctional family or are they simply an exaggeration of normal. All of the Tenenbaum kids are full of insecurities and secrets. Most of these issues can be blamed on the father. He was brutally honest with them even as children. When one of the kids asks if it is their fault the parents are divorcing he says it partially is. When asked about his daughters play he gives his honest opinion. He tells the truth even when it hurts.

The one time he lies in this movie is the one time that this family finds happiness. He lies about his health and the family takes him back in. Because of this lie he is able to mend some old wounds and connect to his family.

There is an important message in this film. The truth need not always be told. So often in this talk show world we live in, we are told to express how we feel and not keep secrets in. We watch curious grown children on TV reunited with an adult that gave them up for adoption. In this movie adopted daughter Margot's reunion with her biological family goes dangerously, and humorously wrong. Margot and her adoptive brother secretly loved each other for years, but neither act on it when they finally confront each other. So what was the point of bringing out the true feelings?

The last scene where Royal is buried and we see his tombstone we get the point. His stone reads something about dying trying to save his kids from a burning ship or something. The point of course is that the truth doesn't really matter in family issues. In fact a few secrets and lies can sometimes be far more beneficial than truth.

This movie's unique theme is only matched by it's perfect cast. Hackman, Houston, Paltrow and Stiller are incredible. The Wilson brother's do a decent job, but I have a hard time watching their scenes. Every time I look at one of them I get completely distracted by their huge noses. Oh, I am sorry. Was I being to honest?