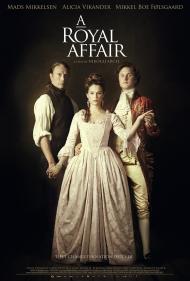 A Royal Affair (En kongelig affaere) is a historical romantic/political drama set in 18th century Denmark. It tells the true story of the arranged marriage of Princess Caroline Matilda of Wales to the King of Denmark, Christian VII. The affair part of the film's title refers to Caroline's relationship with Christian's friend and physician.

At their wedding dinner Caroline invites Christian to her bed chamber, as instructed. Surrounded by several dozen people, Christian looks to one of his advisers, who casually nods his head. Christian then announces he will join her later in her chambers. The sex does not go well and Caroline becomes repulsed by Christian. After becoming pregnant and baring Christian a son, thus fulfilling her most important duty, she bars Christian from her chambers. As Christian has a fondness for whores, he does not go without physical comfort, and their marriage quickly became one of formality only.

While Caroline stayed in Denmark with the baby, Christian went on a tour of Europe, where he met and befriended Doctor Struensee, whom he took back to Denmark, making him his personal physician and confidant. Caroline and Christian remained estranged while Caroline and Struensee discovered they had similar progressive political opinions. Their private conversations lead to a sexual affair.

Christian is shown to be mentally weak and a very poor leader, signing whatever his advisers tell him to. As long as he gets to have fun, he cares not for little else, especially politics. As a friend of the King's, Struensee begins to have influence on his policy making. He and Caroline conspire privately and then Struensee presents their ideas to Christian like an adult leading a child.

If you look Christian VII up you will find that he is today remembered for having mental illness. That may have been the case, but I have a different theory. This film shows him more as an immature drunken fraternity boy than actually insane. What the film does not mention is that Christian was only 17 when he became King and married 15 year old Caroline on the same day as his coronation.

What seventeen year old has the mental fortitude to run a country let alone be married. As for Caroline, what does a naive 15 year old know of sex, love or marriage? They were strangers forced to marry at a very young age. Anyone who has ever raised a teenager will tell you 15 and 17 year olds are, in so many many ways, still children.

Christian is shown loving the perks of royalty. As Mel Brooks said in History of the World: Part I (1981), "It's good to be King." Christian was however, more than happy to leave the decisions to his conservative advisers. After Struensee got inside Christians weak mind, his influence caused Christian to disband his counsel and put Struensee in charge, who immediately started to put his progressive ideas into law. Then Caroline became pregnant again.

Do not make the mistake I did and look the historical accuracy up before seeing the entire movie. I did and it completely ruined the ending. Duh!

Mads Mikkelsen is the biggest international name in the cast. Although he is very well known throughout Europe, he is mostly recognized in the United States as the bad guy in Casino Royale, (2006). Although he is a good enough actor with a memorable look, he was miscast. Mikkelsen was 46 when he filmed this role while the real Struensee was 29 when Christian and Caroline married

We do not know what, if anything, was wrong with Christian. To say a young man who wants to bed different women and avoid responsibility is insane is to condemn the entire male species. His suggestion to make an order that all the women of the court should be naked certainly shows that he is immature, but not necessarily crazy. Either way, I felt Christian was not given a fair shake in this film. He is as much a victim of his situation as Caroline. He had no choice in the marriage either. The one thing they both had in common was that they both trusted the same man. Struensee became a older brother/father figure to the lonely Christian and a secret lover to the lonely Caroline. The film wants us to sympathize with Struensee, but I saw him as a man who took advantage of two young people.

Mads Mikkelsen and Alicia Vikander in A Royal Affair.

I see why A Royal Affair is up for Best Foreign Language Picture. This movie tells a fascinating story in a most compelling fashion. With its gorgeous cinematography and exquisite period costumes and sets it resembles a Merchant/Ivory production from 20 years ago. It tells of an interesting period in Denmark's history. I was completely caught up in this love affair that changed a nation.

The movie begins from Caroline Mathilde's point of view. She nervously moves to her new country and bravely faces all the challenges ahead, including the extremely awkward wedding night experience with the fumbling king, that Eric mentioned. Once Doctor Struensee enters the picture he takes over as the main protagonist, leading the king around by the nose and enacting many progressive new laws in the process. But he is unable to resist the one thing that can bring him down, his attraction to the king's wife. As Katharine Hepburn said in The Lion in Winter, “Such is the role of sex in history.”

Eric, you asked what 17 year old has the mental fortitude to run a country? Well Alexander the Great founded his first colony and named it Alexandroupolis by his 16th birthday. Joan of Arc led the French army in the siege of Orleans at 19. The Roman Emperor Elagabalus launched a coup and seized power at the tender age of 15. Mary Stuart (Queen of Scots) ruled two separate nations before she was18 years old. I won't even mention the many Egyptian Pharaohs like Ptolemy V, who took power at 11 or 12 (of course he also married his sister Cleopatra, so maybe that isn't such a good example). Clearly not everyone matures at the same pace. Christian is shown as immature and a bit slow. The violent spells he is prone to seem to indicate some sort of mental illness but he is high functioning at any rate.

The cast is excellent. I kept wondering where I had seen the actress playing the queen before. She was Kitty in the new adaptation of Anna Karenina. She is a wonderful actress and wears the sumptuous period gowns as if she were royal born. Mads Mikkelsen and Mikkel Boe Folsgaard are both quite good as the doctor and the king, respectively. Mikkelsen looks a bit like a young Jack Palance (see photo). He shows us this intelligent and strong-willed, though common born, man that seized the rare opportunity to influence a sovereign nation's laws. It is interesting how the film subtly implies the good doctor was beginning to be corrupted by this power before the shit hit the fan, so to speak.

A Royal Affair certainly deserves Oscar recognition. It is a beautifully crafted motion picture that tells of a lesser known European country's journey towards enlightenment. 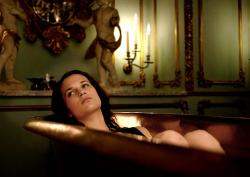 Alicia Vikander in A Royal Affair.

What this film shows and what King Christian's actual mental condition may have been are, of course, two very different things. Historical analysis of his illness seems to vary depending upon who you read. They range from being merely weak-willed as the result of an abusive upbringing to full fledged schizophrenia. In the film he seems more simple-minded than he does insane and in a way that goes beyond mere youth. Even for a 17 year old, he comes across as immature and by the time the film ends he's in his twenties and his mental aptitude hasn't increased. If you want another theory, I have no doubt that the constant inbreeding that went on amongst the crown heads of Europe in those days contributed to his weak mental condition. Christian and Caroline were first cousins after all.

Patrick mentioned how the film begins from Caroline's point of view and then switches to Struensee's. This is its biggest flaw. It would have been stronger if it had maintained one POV or the other for its entire length. It would also have the benefit of shortening the overly long running time. It could have begun with Struensee's arrival at court.

I also agree with Eric that Mads Mikkelsen's age casts a different tone over the story than it would have had if he were closer in age to the King and Queen as he was in real life. The affair between the Queen and the doctor would have seemed more natural. In the film it seems to be almost entirely based, at least on her side, on mutual political opinions rather than hot lust. His age also makes him seem more like a father figure to the King than a contemporary.

This is a well crafted film and the performances are all around excellent. As Patrick pointed out, Alicia Vikander stars in two Oscar nominated films this year, and I'm guessing she has a bright future ahead of her. It's also quite a beautiful film, with the scenery and costumes showed off to good effect.

Unlike Eric, I didn't read up on the story before watching so I didn't know exactly how it was going to end, but it seemed obvious that the Queen and the Doctor weren't going to live happily ever after. It does take a long time to get to that inevitable ending and there's room for some trimming.