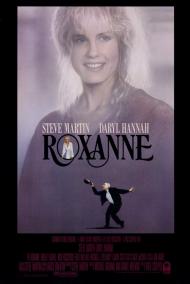 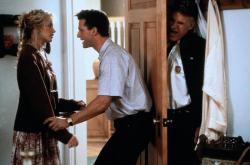 Steve Martin wrote the screenplay for Roxanne, based on Edmond Rostand's play "Cyrano de Bergerac." He stars as C. D. Bales, the captain of an incompetent fire department, in a small Colorado town. He meets and falls in love with a visiting scientist, Roxanne. She meanwhile, has eyes for the hunky new fireman, Chris. The problem is that Chris is a moron, who gets sick to his stomach whenever he has to talk to an attractive girl. C.D. is an insecure intellectual, who has an abnormally large nose. As Chris tells C.D., "She wants a guy that looks like me and talks like you."

Chris makes an effort to talk to Roxanne, but the best he can come up with is, "Your knockers, your breasts, they're like melons. No, no, they're like pillows. Can I fluff your pillows?" Before you know it, Roxanne is looking out her upstairs window talking to Chris while C.D. stands in the shadows telling Chris what to say to her. Saying such lines as, "I love you. I have breathed you in and I am suffocating." Much to C.D.'s dismay, he is so good at sweet talk that he hooks Chris and Roxanne up for a night of sex.

C.D. is in love with Roxanne but he is too insecure about his large nose, thinking she is interested in the good looking Chris. It is a sweet little romantic situation of mistaken identity. It even calls Roxanne on her need for the perfect man. When Roxanne discovers it was C.D. all the time, and asks why he did it, he responds, "You wanna know why? Cause you wanted to believe it. You wanted it all. All the romance and emotion, all wrapped up in a cute little nose and a cute little ass!"

Many of the jokes are about the size of C.D.'s nose. At one point he is challenged to come up with twenty. My favorite is, "It's not the size of the nose that matters, it's what's inside that counts!" The one joke I always remember is when Roxanne kicks C.D. out of the house, but then comes back out and asks what he said last because she thought he said, "Earn more sessions by sleeving."

Roxanne is a nice little romantic moral about how love comes from the way we feel when we are with a person, and not how they look. As Roxanne explains to C.D., "I've been thinking about what attracted me to Chris. It wasn't the way he looked. Well, that's not true, at first it was the way he looked. But it was how he made me feel. He made me feel romantic, intelligent, feminine. But it wasn't him doing that, was it? It was you." Roxanne is best described as sweet.

Roxanne is sweet alright but also a bit bland. I remember having a hard time taking this romantic comedy seriously in1987 and my opinion hasn't changed much in the years since. The original 1897 play was written in verse, in rhyming couplets of 12 syllables per line, which better suits the fanciful, and rather silly, premise. Despite a few humorous moments, Roxanne never quite overcomes its sitcomish set-up.

For example, Roxanne is a respected astronomer but she can't tell that this moron, who can't put two intelligent words together, isn't the same man who wrote those extremely poetic and witty love letters? And in the scene where C.D. and Chris are both outside her house it seems rather ludicrous that she doesn't realize either that there are two people whispering together, or that a different person begins speaking to her at one point. When recited in rhyme and set in 17th Century France it might work, but in this setting, not so much.

Steve Martin is decent in the Cyrano role but his prosthetic nose looks too fake, like a costume that I kept waiting for him to remove. I also think he fails to generate enough sympathy for the character. We are told he's insecure about his looks but he carries himself with a confident swagger that contradicts this statement. As for Daryl Hannah, she seems uncomfortable in the title role. Perhaps it's just the uneven manner in which her character is written. One minute she's a levelheaded scientist and the next she acts like a lovestruck teenager.

The cast includes several famous faces as well as a few soon to be famous faces. Both Damon Wayans and Kevin Nealon have bit parts early in their careers. The always reliable Fred Willard and the talented Shelly Duvall have rather thankless supporting roles. Michael J. Pollard makes the most of his few scenes as one of C.D.'s bumbling firemen, whose antics are too stupid to be truly funny. These slapstick shenanigans by the firemen, coupled with C.D.'s impressive displays of gymnastics as he repeatedly climbs all over the outside of Roxanne's house, seem at times to be an homage to silent era comedy; only they pale in comparison.

The fact that this movie has been hailed as a minor comedy classic baffles me. Sure it provides a few chuckles, and I suppose it does exude its own unique brand of charm, helped in no small part by its picturesque setting (it was filmed entirely in British Columbia), but it never really gels. Edmond Rostand's play is famous for having introduced the word “panache” into the English language. Now that's a quality Roxanne could have used more of. 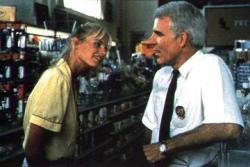 Steve Martin wrote 25 drafts of his screenplay for Roxanne. What began as a near verbatim modern retelling of the Cyrano story gradually morphed into a comedic homage that is the finished product. Given the tragic ending of the original wherein Christian and Cyrano both die and Roxane enters a convent, a too strict interpretation wouldn't exactly be a laugh fest. The filmed script instead contains many parallels with the original story, some obvious and some subtle, but differs in its resolution. It's an entertaining update that has plenty of charm.

I disagree with Patrick that the film never overcomes its sitcom setup and Martin's obviously fake nose never bothered me. This film is light and whimsical and isn't meant to take place in the real world and so these things don't matter. As the opening duel, using a tennis racquet and a ski pole, shows, this is set in a heightened reality.

Where I do agree with Patrick is that the character of Roxanne is rather weak. The scene with C.D. feeding Chris lines through the earpiece hidden under the hunting cap is funny, but it weakens Roxanne's character that she can't see something strange is happening. It's at that point that she starts to feel less like a real character and more like a male fantasy. This is further cemented when C.D. reads one of his own letters about her out loud to her and instead of finding his incredibly detailed obsession with her a little creepy (he can remember down to the minute when she changed her hairstyle one day, for instance), she is instead infatuated by it. And while there have been many beauty and the beast type films, they are always one-way. You never see a handsome man learning to love an ugly woman, instead she is always shown to be secretly beautiful by the film's end.

But those are minor quibbles in a movie that I remember enjoying when it was first released in theaters and I can still enjoy it today after many years and repeated viewings. I wouldn't call it a comedy classic as the humor is more gentle than laugh-out-loud. Although, like Eric I've always remembered the line "Earn more sessions by sleeving." and it still made me laugh this time. Some of the biggest laughs are provided by the inept fireman, which Patrick called stupid, but which I call amusing.

Martin put a lot of effort into the script and it shows. The finished film is as sweet as Eric described and one that I always enjoy.