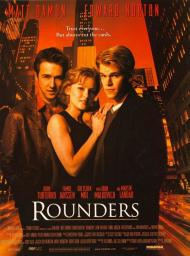 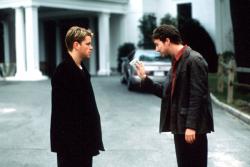 The first line in Rounders is a narration from Damon who says, "Listen, here's the thing. If you can't spot the sucker in the first half hour at the table, then you ARE the sucker." So listen, here's the thing if you don't turn off this DVD in the first half hour you are either a poker playing nut or your too lazy to hit a button on the remote. This movie is BOOOORING!

Damon plays a law student, Mike, with a gambling past. He is dating a hot chick and his future seems bright. His old pal, Worm, gets out of prison and before you know it they are back to making the rounds to the different poker games. Thus, the title Rounders. They get into deep debt and are forced to get into even more poker games to win even more money before they get seriously hurt. Because all of his time is spent with Worm gambling, Mike's girlfriend breaks up with him and he bombs out of school. He does not really care, because poker playing is his life and his dream is to go to Vegas to play in the World Series of Poker. His girlfriend and college were just getting in the way.

So most of the movie is Mike and Worm playing poker. How exciting is a card game to watch? Again, if you play lots of poker you may find it interesting, but you would probably be happier actually playing a game, than watching this. I fast forwarded through several of the games. All that I need to know is who won. The game itself was moot. Mike and Worm get threatened. They get beat up. Who cares? Both of these guys walk into these games knowing exactly what could happen. I never felt any compassion for either of them. I never cared if they won or not. I just needed to know who won so as to predict where the movie was going to go next.

Norton, one of the greatest actors of the last 10 years, is wasted in the supporting role. This was made during Damon's bland phase. All he seemed to do in these movies, made in the 90's, was to look as if he is desperately trying to remember his cue and next line. Janssen has absolutely nothing to do the entire movie. Malkovich steals every scene he is in because he uses the most ridiculous accent since Johnny English.

Rounders contains bland characters with boring goals. Who in this movie am I supposed to root for or even give a shit about? The best this movie has is the first line and I have already told you that, so you should never have a reason for watching this movie. Rent Lock, Stock and Two Smoking Barrels for a better movie with a similar plot.

I haven't played a game of poker in over 20 years and I still enjoyed this movie. Well, at least I enjoyed it more than Eric. But then the movie isn't just about poker. Like most sports movies (which I'll classify this one as), it uses its "sport" as a metaphor for how to live your life, which in this case means, are you willing to gamble everything?

Damon, while not overly exciting, actually does a fairly good job. This was the first movie I saw him in where I actually thought he might have something. I disagree that Norton is wasted and think that he does a good job as the slimy Worm. However, the relationship between Worm and Mike makes little sense. Mike's loyalty to Worm lasts way too long into the story and beyond the reasonable breaking point.

I do agree with Eric about Malkovich's accent. He sounds like he thinks he's auditioning for Rocky & Bullwinkle and I constantly expected him to say "MOOSE AND SQUIRRELL!"

One problem I had with this movie that Eric didn't mention, is that it runs long. Its pace is too slow to sustain itself for 2 full hours. I do like the symmetry of the two poker games between KGB, one at the beginning and again at the end. There's just too much that happens in between those games that could have been trimmed.

This isn't a great movie, but it is better than Eric so emphatically declares. However, for a movie about gambling, it takes very little chances and subsequently does drag in parts.

Also, I believe that the phrase "rounders", actually refers to a group of people who know their way "around" a card table and not people who "make the rounds". 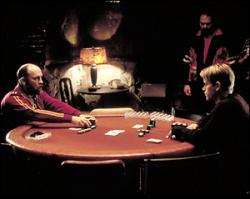 Malkovich and Damon face off in Rounders.

Eric, you are so wrong about this movie that I hardly know where to begin. I didn't find it boring at all. And I have no idea why you couldn't sympathize with Mike. He simply wants to follow his dream and not spend his life doing something he has no interest in just to play it safe and make his girlfriend happy. He obviously has a talent for poker and it's what he loves doing. I was rooting for him the whole way through. He explains that poker isn't really just a game of chance anyway. “Why do you think the same five guys make it to the final table of the World Series of Poker EVERY YEAR? What are they, the luckiest guys in Las Vegas?”

I also disagree with you Eric, that Damon does a bad job of acting. On the contrary, he is quite good in the role. He has a great poker face and (both metaphorically and literally) keeps his cards close to his chest. I concur with Scott that Ed Norton is also quite effective as Worm but I disagree with him that their relationship doesn't ring true. In his narration, Mike explains why he sticks by his childhood pal. It's because Worm has had a shitty life all the way back to when he was a kid getting beat up by his father. They were a team and have always been there for each other. Mike is perhaps too loyal, but never unbelievably so.

Eric, if you fast forwarded through the poker games then you missed some of the best dialogue and it's not as if they go on for any extended period of time. In one clever scene Matt interrupts a card game between a group of older gentlemen. He goes around the table and proceeds to tell them each what cards they are holding. “You were lookin' for that third three, but you forgot that Professor Green folded on Fourth Street and now you're representing that you have it. The DA made his two pair, but he knows they're no good. Judge Kaplan was trying to squeeze out a diamond flush but he came up short and Mr. Eisen is futilely hoping that his queens are going to stand up. So like I said, the Dean's bet is $20.”

I do agree with my brothers that the pacing of the story could have been swifter and a few scenes (I'm thinking the trip to Atlantic City) could have been shortened or made into a montage. Still, I remember enjoying this movie when I first saw it back in the 90s and I can honestly say I appreciated it even more this time around. The tension builds up nicely as Mike and Worm go on a desperate poker marathon around the city in order to raise fifteen grand and keep themselves from getting seriously hurt. Their relationship comes to its head when they get the shit kicked out of them by the poker playing cops in Binghamton after Worm gets caught cheating. Here it makes sense for them to part ways. The cowardly Worm runs away, while Mike bravely chooses to face his fate head on.

OK so Malkovich's Russian accent is a bit over the top. Can you really blame the guy for trying to make a small part memorable? He has maybe two dozen lines in the entire movie and only a few scenes. He does more with his role than either Landau or Turturro, two other great actors reduced to playing thankless supporting parts.

Rounders is not a great movie but it is much better than Eric says it is.