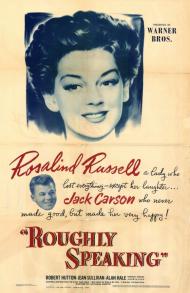 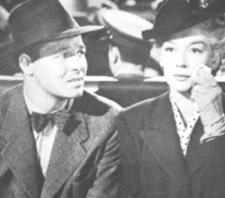 During World War II, Hollywood understood that the nation needed some reassurance that times would get better. Where are those film makers today? In the 1940's they made plenty of films depicting the heroics of war and the determination on the home front. Roughly Speaking is a film aimed directly at the women at home struggling during difficult times.

Louise is a woman of boundless energy and determination. She enrolls in college, gets married and has four children. One daughter has polio, and needs to walk with a cane. The marriage, however, crumbles and he leaves her for another woman. Louise keeps a stiff upper lip and soon meets Harold. He is much more to her liking. They both take life in stride and always tend to look on the sunny side, even when things are not working out for them. Together they have a son and start a greenhouse business. All is looking up for them when the stock market crashes.

The movie covers about 30 years. It shows Louise’s struggles through life. This is definitely comfort food for the women of the time period. Louise has many ups and downs in her effort to raise a family and sometimes just make ends meet. The movie’s final scene, although still dramatic today, probably broke many hearts at the time it was released. It takes place at a train station as Louise and Harold see all three of their sons off to war.

The final scene could have easily been over played as this is the emotional climactic moment of a mother possibly seeing her sons for the last time. However, Roughly Speaking was directed by Michael Curtiz, who just happened to also direct such classics as Casablanca and Yankee Doodle Dandy. Remember the scene where Ilsa and Rick are first reunited? Remember Cagney dancing down the stairs after meeting with the President? Curtiz was a master of the subtle scene that says so much. In Roughly Speaking we have Russell’s face looking on as her sons walk off into harms way. It could have been pushed to an exaggerated level of bawling and screams but Russell just looks on and tries to keep her emotions intact even as a few tears escape her eyes.

This is Russell’s film from start to finish, but Carson hold’s his own against her. He usually played supporting roles, but this is one of his rare lead parts. The guy could play the comic relief such as in Arsenic and Old Lace or give great dramatic support, such as in A Star is Born. His best moment comes when Louise finds him gambling at a pool hall. They share a scene that goes from heavy to light in a matter of moments.

Hollywood no longer seems to care to make inspiring films like this one. Instead they make movies that insult President Bush over the war in Iraq, and by extension the U.S. Military. Is it any wonder that the only movies making any money these days are the fantasy ones? If ever the public needed to be encouraged, it is when times are difficult. For whatever reason, Hollywood has instead, chosen recently to kick our country when it is down instead of trying to lift it up. Are there any patriotic directors, like Michael Curtiz, around today?