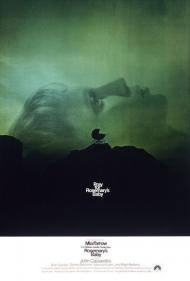 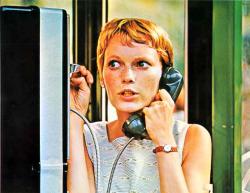 Rosemary's Baby, Roman Polanski's satanic, cinematic nursery-rhyme, shocked audiences when it premiered in 1968. It tells the story of a young couple, Rosemary and Guy Woodhouse, who move into an old apartment building on Manhattan's upper west side. When a young woman the wife just met in the laundry room commits suicide by jumping from their neighbor's window, Rosemary and Guy befriend Minny and Roman Castevet, the elderly couple next door.

Unusual events begin occurring and Rosemary finds herself pregnant after a particularly strange evening. She passes out after eating some chocolate mouse prepared by Minny and then proceeds to have a troubling dream in which she is painted with blood and raped by a beast-like creature. She awakens the next day with red marks on her body. Guy takes the blame, apologizing by making the rather lame excuse that he was very drunk.

Things go from bad to worse as Rosemary's pregnancy advances. She soon has suspicions about her neighbors, her doctor and even her husband. Are they witches? What do they want with her baby? The tension and atmosphere grow more and more taut as Rosemary slowly discovers the horrifying truth.

Mia Farrow is perfect in this role. Her image as the terrified young mother-to-be is firmly ingrained in our movie memory, complete with flowered miniskirt and bobbed Vidal Sassoon haircut. Ruth Gordon is great as the creepy and garish Minny, with her ever-present drink mixture made with tanis root.

Roman Polanski captures precisely the uneasy time period of the late sixties by taking advantage of the new freedoms in filmmaking. Nudity, violence and adult language were just becoming permissible in Hollywood. What makes Rosemary's Baby so scary is how seriously the subject matter is treated and in the fact that the director holds back more than he shows. After all what can be more frightening than our own imaginations?

Two historical and infamous murders have also added to this movie's legend. It was filmed in The Dakota. The same apartment building that John Lennon was living in when he was gunned down in the street in front of the entrance. This is the same spot where the young woman's body is found when she jumps to her death in the movie. The other famous murder is, of course, that of Roman Polanski's young, pregnant, bride Sharon Tate by the Manson family.

Rosemary's Baby is paced leisurely and weaves an eerie spell that culminates in a chilling and horrific revelation.

The scariest aspect of Rosemary's Baby is the intimate nature of the threat to Rosemary. Her abundantly friendly, elderly neighbors at first come across as the most helpful grandparent types you could ever want. The more Rosemary learns of them however, the more intrusive and disturbing they become. The real fear begins when she believes her husband has joined them in their plot against her. The scene where he admits to having sex with her as she slept smacks of spousal rape.

I agree with Patrick. I found Mia Farrow to be perfect as the naive Rosemary. Like an innocent lamb surrounded by hungry wolves, she is horribly defenseless. She makes little attempts to reach out for help, but she is ultimately not brave enough to truly do what is necessary to protect herself, her baby and for that matter, the world.

Rosemary comes across as your average woman of the time. She does not work outside the home and aspires to nothing more than to be married and have children. She looks at the world through the eyes of a child. All she knows is her duty to be a wife and mother. She gets told what to do almost every step of the way.

The more Rosemary learns and suspects, the more she takes things into her own hands. We start to see that she may have a way out. However, she never attempts the one thing she needs to do, run away as fast and as far as she can. The idea of her leaving her husband seems as farfetched an idea to her as putting a man on the moon, which would happen one year after this film’s release.  Rosemary is nearly as much a victim of the times as she is the neighborhood cult.

At the time of this film’s release, such satanic ideas and plot devices were new to cinema. Watching this movie today we see from the beginning where everything is heading. Rosemary is given all kinds of clues and hints every step of the way. We as the audience pick up on them all while Rosemary seems, at best, mildly interested.

Although the shock and surprise of Rosemary’s Baby has disappeared over the years, it remains a fascinating watch. Polanski does not spoon feed you every detail, forcing you to pay attention and, as Patrick wrote, use your imagination. Rosemary's dream are very well done. The entire film is a great piece of direction even if the fear factor has diminished.