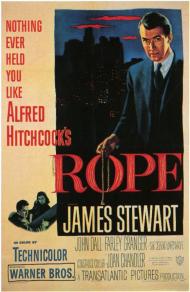 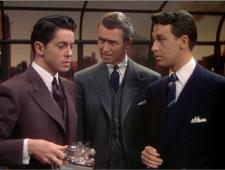 Rope is an interesting experiment of a film.

Rope is rather unique, even for an Alfred Hitchcock movie. At least it's filmed in a fairly unique manner. It takes place in near real time and in almost one long take, featuring only a few visible cuts. There are other cuts, but they are hidden by objects passing in front of the camera. It's an interesting gimmick, but whether or not it really aids in the storytelling is debatable. Since the entire story, apart from one quick opening shot during the credits, takes place in one apartment, and the script is adapted from the stage, the no-cuts film technique definitely helps the movie seem like a play.

The plot is inspired by the Leopold and Loeb murder of the 1920s. Brandon and Phillip are two effete young men with superiority complexes. The pair commit a murder for no other reason than to prove that they can get away with it. The movie opens with them strangling a "friend" of theirs and hiding his body in a trunk in the living room of their Manhattan apartment. Immediately after the murder, guests starting arriving for a dinner party that they've arranged. The guest list includes the murder victim's father, his aunt, his girlfriend, another friend of his and Rupert Cadell; Brandon and Phillips old mentor from school. In a macabre twist, they serve dinner off of the top of the trunk in which lies the dead body.

Most of the plot, and certainly the best part, is a cat and mouse game between Rupert and Brandon. Brandon believes that Rupert would agree with what they've done because he used to espouse a view that murder was an art form that was the purview of the superior classes. What Brandon can't grasp is that for Rupert his theory was just an intellectual exercise. Brandon is also proud of what he's done, to the point that he almost wants Rupert to know so that someone will appreciate what he's done.

Although it's subdued, there are clearly some homosexual overtones at work. It's not only evident while watching, but has also been written and spoken about by those involved with the film. Because of the Haye's Code it is mainly in the form of subtext, and was toned down from the original play, but it is still clearly there. It is most obvious in the opening murder, which is filmed almost as a sexual act. Phillip is emotionally spent afterwords, and needs a minute to compose himself, while Brandon lights a cigarette. Phillip then questions Brandon on how he felt during the act. Throughout the rest of the movie, it is clear that the two men are a couple.

The set is also well done, particularly the backdrop outside the apartment windows. The view from the apartment shows the New York skyline, including the Empire State Building. Fiberglass clouds hang in the sky and change over the course of the movie as the sun sets and the lights in the buildings come on. Today it would all be done with computers in post-production, but here it was done in real-time along with the rest of the movie. Legend has it that Hitchcock was disappointed in the way the sunset looked and so refilmed a good portion of the movie so that he could get it right.

While there are some things to enjoy about this movie, ultimately it's more interesting than entertaining. It's a curiosity more than anything else, worth seeing once by fans of Hitchcock and film buffs in general, but not one that might appeal to everyone. 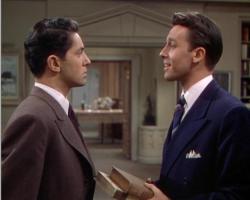 As Scott wrote Rope was an experimental movie for Alfred Hitchcock. The brilliant set with the changing light in the Manhattan skyline, the sense of real time passing, and the extended takes are all fairly unique. This was also Hitchcock’s first movie shot in color.

Although the sexuality of the two murderers is never explicitly stated (their inspiration, Leopold and Loeb, were well known to have been lovers) it is implied enough that Rope was banned in several American cities. Screenwriter Arthur Laurents (he also wrote The Way We Were) claims that in the original play James Stewarts’ character was supposed to have had an affair with one of the murderers while in school.

In real life Farley Granger is an openly gay man, still living as of this writing. He was in a long term relationship with producer/director Robert Calhoun from 1963 until Calhoun’s death in 2008.

Another bit of trivia involves the scene where two characters try to remember the name of a movie starring Cary Grant and Ingrid Bergman. They are, of course, referring to Hitchcock’s Notorious which had been released two years before. Hitchcock originally wanted Cary Grant for this movie but settled for James Stewart instead (both stars would appear in a total of 4 movies for Hitch).

The script is a tad melodramatic. This is most apparent in the hammy performance by Farley Granger. His rather histrionic acting is well suited to the part though. The rest of the cast is good, especially John Dall as the cold blooded and cerebral Brandon.

I agree Scott, this is an interesting movie, and at 81 minutes Rope doesn’t hang around. 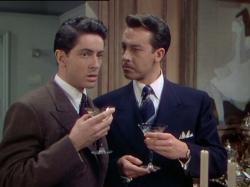 There is no doubt that Brandon and Phillip are lovers.  Scott points out the murder as a sex act.  After catching their breath and Brandon lighting his cigarette, he opens the curtain and says to Phillip, "Pity we couldn't of done it with the curtains open in the bright sun light."  They often stand and talk at very close proximity.  Their faces mere inches from each others.  They then have a, was it good for you conversation.  Phillip asks Brandon,  "How did it feel...during it."  "I don't remember feeling very much of anything... until his body went limp and I knew it was over...I felt tremendously exhilarated.  How did you feel?"

Rope is loaded with Freudian phallic symbolism.  Brandon works at opening the champagne bottle.  His hands moving about the cork as his other hands rotates the bottle.  Phillip finally gets tired of waiting and takes it from him and pops the cork.   Brandon likewise handles and straightens the candles several times.   When Phillip tells Janet he does not eat chicken, she responds, "How queer, I never heard of anyone who didn't eat chicken."  She continues, "Why don't you eat it, Phillip?"  He responds, "I just don't."  but she keeps going, "Now there must be a reason.  Freud says theirs a reason for everything."

Hitchcock was clearly not hiding their sexuality.  When Janet asks to use the telephone, Brandon responds that it is in, "the bedroom".   He does not say "my" bedroom or "Phillip's" bedroom.    Later the maid states that there is a second bedroom, but she refers to it generically.  Later Brandon talks of him and Phillip going on a vacation together.

I love movie dialog and had fun picking out the details.  In fact, the secret of their sexuality is far more an interesting mystery than the actual murder.  Brandon early on acts as if Phillip is the weak one, yet Brandon gives much more away than Phillip.  His ego is too desperate for attention to keep quiet.  His party to celebrate them getting away with murder had the opposite affect.

Rope is a nice exercise for Hitchcock, and a worthy watch, but it is not his finest work.  You can see how the single setting would be an influence on the vastly superior Rear Window.