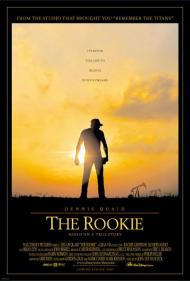 Dennis Quaid in The Rookie.

The Rookie is based on the life of Major League Baseball reliever Jim Morris. This inspiring true story by the Disney folks is a heart warming family film. Rated G but definitely intended for teens on up.

Jim Morris loved baseball growing up. His dad was in the service so the family moved around a lot. Baseball was the one constant he had in his life. After one particular move Jim discovers that he has left a moving box containing his baseball glove at the previous home. His rather cold father just hands him a portable TV to carry in the house and sternly informs him that "there are more important things in life than baseball". Obviously being an understanding father is not one of them.

Jim grows up to play minor league baseball, but gets injured and his baseball career comes to a halt. Instead he becomes a high school teacher and baseball coach. He gets married and has three kids.

While attempting to inspire his high school players with a speech about hopes and dreams the players strike a deal with him. If they win districts he has to try out for the major leagues. They do and he awkwardly does. In one of the best scenes he has his three children at the try outs while surrounded by younger guys. Some by 15 years. He unassumedly pitches not realizing that the scouts are all excitedly clocking his pitches at 98 mph.

Of course he gets drafted and in his mid thirties is one of the oldest minor leaguers. He misses his family and has little in common with the other players. The scene where he finds out he has been  called up to the big leagues is thrilling. You witness someone realize a lifelong dream. The subsequent scenes of telling his wife and the actual game are emotionally stirring.

The movie certainly is about baseball, but more than that, it is about a dream come true. How many of us actually get a shot at a dream let alone a second chance. Whether you like baseball or not you can relate to this man.

I have never been keen on Dennis Quaid's acting. He usually seems to get by on his awkward smirk. Here he has to demonstrate some range and he does a great job.

The big flaw of the movie is the length. At about 2 hours your kids will squirm. It is rated G but younger kids will find most of the heart warming dialogue to be boring. Also, the movie is book ended with a story about nuns that has nothing to do with the story. A tighter editing job would have help this movie out.