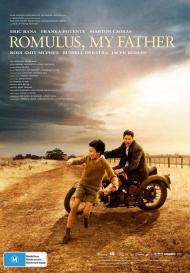 Eric Bana in Romulus, My Father.

Romulus, My Father is the memoir of Raimond Gaita. His parents were immigrants from Europe who moved with him to Australia when he was young. There, he witnesses and comes to grips with his parents completely dysfunctional relationship.

The movie opens in 1960. Romulus and his son, Rai live in the outback, on a run down piece of land. One day his mother, Christine, shows up after being away in Melbourne. It is clear that the parents have issues as she spends the first night back, sleeping with her son and not her husband. Soon though, the parents are having sex and Romulus reveals that he missed her. Christine is unfazed by him and soon leaves, again, after they argue about the other men in her life.

Other than some schooling, a couple of old ladies and a visit by a friend of his father's, Rai spends most of his time alone. His father is a man of few words and Rai spends great amount of time just observing what goes on around him. At ten years old he is trying to understand some very adult issues. His mother continues to pop back and forth, in and out of his life, causing heartache for all that get near her and takes full advantage of his easy going, yet hard working, father.

This is a film of great emotional weight. Bana does the best most dramatic work that I have ever seen from him. All of the cast members are, in fact, great. The script calls for very little dialogue and so the actors have to move the story along with expressions instead of lines. This makes for some great opportunities for them to shine. Smit-McPhee is in nearly every scene and his character's growth throughout the film is heartbreaking as he slowly starts to see those around him for what they are.

Although this is a showcase for actors, I would have liked more dialogue. Many scenes take place without a single line spoken. Far too often actors are just shown going through an emotion without anyone talking. As a result, the film seems to move along quite slowly at times, and we never come close to understanding anyone. Perhaps it was intended to represent the child's perspective, but all of that fine acting is gone to waste if the characters are never able to become better understood.