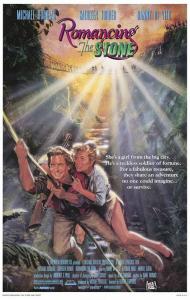 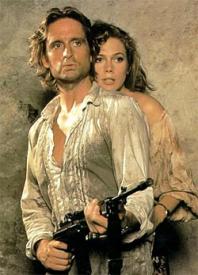 Joan Wilder is a romance novelist who has to deliver a treasure map to some criminals in Columbia, South America, with her sister as ransom. Joan is a city girl without many actual life experiences.  She writes about love and adventure but has never experienced either, until now.

She is being pursued by a revolutionary, Juan, who also wants the map.  Upon arriving in Columbia, she is to take a bus to a city, but gets on the wrong one and ends up in the jungle.  Jack T. Colton arrives just in time to save her from Juan stealing the map.

Jack is the hero but he is no saint.  She has to pay him before he agrees to take her to the nearest telephone.  The revolutionary gets his men together and they chase after them.  Jack and Joan get shot at, slide down a mountain in a mudslide and swing on a vine across a river canyon.  Most importantly, they fall in love.  "You're the best time I've ever had." Joan tells Jack. "I've never been anybody's best time," He responds.

They decide to use the map to find the treasure, so as to be,"..holding all the cards," when they confront the kidnappers.  A problem arrives in the form of Danny DeVito.  He is cousins with the kidnappers, and inadvertently stumbles upon Jack and Joan just before they find the treasure and go over a waterfall.  Things do not go as planned and Joan is left wondering if Jack truly loved her or was he just trying to romance the stone out from under her.

Romancing the Stone has it all.  Danny DeVito delivers some funny dialogue as only he can. "Look, bullet head. If they're hiking through the jungle there's nothing I can do about it. I have a car. I am not Tarzan. I have been through every one-horse shit hole for a two-hundred mile radius."    The most humorous moment is when a drug lord recognizes Joan and helps them out.

When this film first came out, Kathleen Turner was known for her sizzling femme fatale in Body Heat (1981).  Michael Douglas was known for his work on the television show The Streets of San Francisco and a supporting role in The China Syndrome (1979).  Turner's career took off and she became the female star of the 1980's in such films as Prizzi's Honor (1985) and Peggy Sue Got Married (1986).  Douglas's career took a bit longer to get going, but in 1987 he made the A list with Wall Street and Fatal Attraction. They, and DeVito, would appear in the sequel, Jewel of the Nile (1985) as well as The War of the Roses (1989). 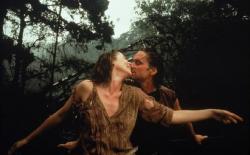 Kathleen Turner and Michael Douglas in Romancing the Stone.

Robert Zemeckis was certainly on a roll in the 1980s.  Romancing the Stone, which was his first big hit, was followed by the Back to the Future movies and Who Framed Roger Rabbit.  Reportedly he was also hired to direct Cocoon, but studio bosses who saw an early cut of Romancing the Stone, were so sure that it was going to be a flop (deeming it as an inferior Indiana Jones clone), removed him from that project.  It's obvious who had the last laugh on that subject.

While I still enjoyed this movie, I didn't quite love it as much as you seemed to Eric.  While most of it is light and very funny, some of the humor falls a bit flat.  Your favorite scene with the drug lord who is also a fan of Joan Wilder's seemed kind of silly and their escape with him driving his truck while pointing out interesting features of the village while they're being shot at just didn't work for me.  I wish it had taken itself just a bit more seriously.  I don't mean remove the humor, but it's kept so light that there's never a real sense of danger anywhere in the story.

I agree with you about the sense of timelessness, Eric.  At least once Joan gets to Colombia that is.  While she's in New York there's no question of the time period.  I mean, the hair and clothes on the men in the bar she goes to with her publisher is quite hilarious and incredibly dated.  Once she gets off the plane and onto the bus though, the story could be set in almost any period from the 1940s onward.

The best scenes are those with Douglas and Turner alone together.  They make a great pair and share a nice comic, but sexual chemistry.  It truly feels as though these two are falling for each other, which isn't as common as you might think in romantic comedies where too often we're simply told that these two people are in love.

This movie definitely has its charm.  It's fun, funny and very fast paced.  Maybe it didn't quite live up to my memory of it, but it came close enough.  There's rumors of a pointless remake being in the works, which I'm quite sure will fail to live up to the original. 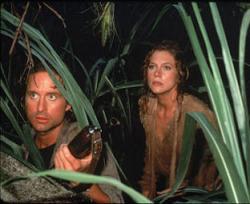 From the opening sequence with Joan writing the ending for her latest novel in an Old West setting, to the final scene of Joan and Jack on his boat in New York City, Romancing the Stone hits all the right notes. It is breezy, colorful, fast-paced fun from start to finish.

Kathleen Turner and Michael Douglas are both perfect. Joan Wilder, the mousy romance novelist who suddenly finds herself in an adventure straight out of one of her books and soldier-of-fortune Jack T. Colton, part hero - part rapscallion, are memorable characters that (as noted above) make a wonderful pair.

I love movies that take you along for the ride on an adventure and Romancing the Stone does just that. It combines thrills, exotic locales, laughs and romance into one tasty confection. Eric, I agree wholeheartedly with your comparison to The African Queen. Both movies feature opposites attracting on a dangerous quest where they fall in love as equals (both Hepburn and Turner take their turn chopping a path through the jungle with a machete). Although Hepburn and Bogie were already legends when they starred together in that movie and this movie provided the launch pad for the careers of Turner and Douglas.

Eric, I agree that the funniest scene is where the drug lord and his men recognize Joan Wilder. It is not only hilarious but it also manages to very cleverly get Joan and Jack out of a scrape. Scott, I laughed when they make their escape while the drug lord points out local attractions as if they are tourists. “The tree on that hill over there was planted by my brother.” It fits with the lighthearted mood of the entire movie.

As fun as all the adventure stuff is my favorite moment comes when they seek shelter and rest in the old fuselage of a crashed plane. They start a fire using the copious amounts of marijuana onboard and begin to get to know each other. At one point Jack picks up an old Rolling Stone magazine and says, “Dammit man, the Doobie Brothers broke up! Shit! When did that happen?” Joan gives him an incredulous look and asks, “How long have you been down here?” “Forever.” He succinctly replies.

Romancing the Stone lived up to my memories. I loved it in 1984 and I love it today. It is a timeless romantic comedy/adventure that will be as entertaining 50 years from now as it is today. 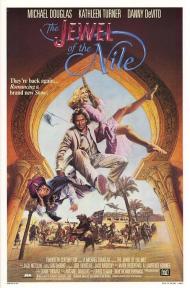