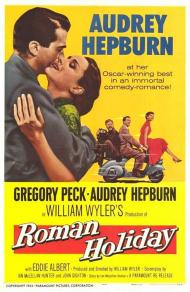 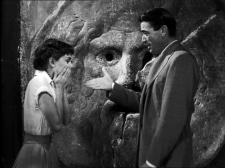 Roman Holiday is remembered for one thing, and one thing only, Audrey Hepburn. It was the movie that made her a star. It earned her a Best Actress Academy Award. She had that undescribable something that glowed on screen.

Hepburn plays Princess Anne, who is on a European Goodwill tour, filled with parades, meetings and public appearances. Tired and bored from the tight schedule she must keep, she sneaks out at night to see Rome. She soon meets Joe, who unbeknownst to her is a reporter. Joe soon discovers who she is, and invites her to let him show her around, all the time doing it for a story that will net him some money. Eddie Albert plays Joe's photographer friend who, in some of the funniest scenes, cannot take a hint. He tags along while secretly taking pictures of Anne.

They have a fun time seeing many tourists sights. To escape the secret service that are looking for the Princess, they jump into a river and swim to shore. Soaking wet, and caught up in the moment, they kiss. Of course the two fall in love. They go back to Joe's apartment, and for a brief moment, imagine a life together. They both know a relationship could not work. As Joe says, "Life isn't always what one likes."

The movies last scene is its best. Princess Anne gives a press conference, and sees Joe among the reporters and realizes what has been going on. They exchange a few words masked as a reporter interviewing a celebrity, but they are saying so much more to each other.

Roman Holiday is reminiscent of It Happened One Night. In both films a reporter hangs out with a run away heiress/princess while getting a story. Gable was only two years older than Colbert. They looked made for each other. Peck was thirteen years older than Hepburn. Add to it that Hepburn looked well younger than she was, and it seemed as if Peck was kissing a minor. Since they both had dark hair I kept thinking that it looked like Peck was kissing his daughter.

Gregory Peck was a good actor with classic tall, dark, and handsome leading man looks. He was unfortunately too old for Hepburn. Joe is a middle aged man living in Rome who falls for a girl he knew for one day. Even though Hepburn is as charming and beautiful as any actress who ever graced the screen, Joe acts like a teenager experiencing his first love. 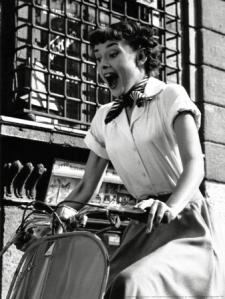 My brothers have often accused me of overlooking the flaws in classic movies and rating them based on their fame alone. Roman Holiday is one classic that I think is vastly overrated. The plot is paper thin. It basically consists of the two main characters sightseeing around Rome. And while it is fascinating as a time capsule of the Eternal City, this is hardly enough to keep an audiences attention for 2 hours.

The romance between Joe and the Princess doesn’t ring true. Eric mentioned It Happened One Night which is a far superior movie. Clark Gable and Claudette Colbert fall in love in a totally believable and charming manner. In this movie Joe goes from caring only about his story to being head over heels in love in a split second. One kiss is all it takes. And I don’t for a second buy the ending. It may be gallant but it also seems contrived.

Unlike Eric, I never thought Gregory Peck was too old for Audrey Hepburn. They do have chemistry together and with a better script would have made a fine screen couple. Honestly I have never been enamored of Audrey Hepburn’s charms. She was an adorable gamin with great posture but she was always a bit too precious for my tastes. I have always considered her more of a fashion icon than a great movie star.

Yes this movie has two stars that are pleasing to the eye, it has some humorous moments and it features great location shots of Rome. But since this is a movie rather than a postcard, none of that makes up for the weak plot and forced ending. Certainly not one of William Wyler’s best movies. 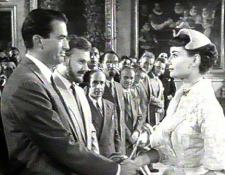 The final scene is a classic.

It just figures Patrick that for once you dislike a classic movie and both Eric and I disagree with you, because I found this movie to be very entertaining. And you call the ending forced? I have to agree with Eric, the ending is the best part of the movie. Joe and Anne share a great moment with her on the dais and he behind the rope. So much is going on between them without a real word being spoken. It's a great scene.

I for one had no problem with the age difference. What I think is great about Hepburn's performance is that at the beginning of the movie I was ready to agree with you Eric, that she was way too young for Peck, but as the movie goes on she grows up before your eyes. By the time she returns from her holiday she's matured to the point that seeing her with someone Peck's age doesn't seem inappropriate at all.

About the only problem I had with the movie is that you never really learn much about Joe. Anne's character is completely rounded, but you don't really know much about Joe beyond him being a down on his luck reporter. I imagine he probably served in WWII, with his photographer friend, and perhaps they decided to stay in Europe after the war, but that's not information given in the movie. A love story where both characters are fully developed is always better.

I also love that the movie ends without the two of them together. It's the right ending because they would never have worked as a couple. He wouldn't fit in her royal world and she, while enjoying the freedom for a day, would have trouble adjusting to his world as well. And yet at the end of the movie you really feel the longing between the two of them because they don't even get the chance to try. That's much more than a postcard Patrick, that's movie magic.