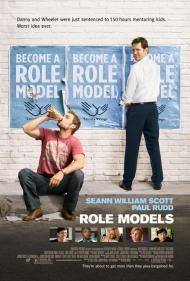 Role Models is one of the funniest movies I have seen in a very long time. I cannot remember the last time I laughed so much. This adult comedy works on so many levels that it is definitely worth a second watch.

Danny and Wheeler are co-workers at an energy drink company. Danny is depressed by his stalled professional life. Wheeler is just happy to have a job. The movie opens with Wheeler holding his fingers up to Danny's nose and asking, "You know what I did last night."

In one of my favorite scenes, Danny goes off on a coffee shop clerk because they call a large coffee a "venti" instead of simply calling it a large. His embarrassed girlfriend breaks up with him. With nothing going right, Danny messes up his job and his truck tries to rape a horse statue. He and Wheeler get arrested and sentenced to community service helping at risk children.

Wheeler gets matched with a foul mouth 10 year old, Ronnie. The moment Wheeler sits next to him he yells, "I don't want to take my pants off." After Wheeler drops Danny off, Danny asks him to pick him up in two hours, Ronnie yells, "Fuck you miss Daisy." Ronnie is the weakest aspect of the entire film. How can you like a kid who just needs a good ass whipping?

This movie has so many great lines. I laughed at all of the sexual innuendoes made by the fantasy nerds. "The king is unprotected. I shall approach him from the rear." "Let us raise our swords and touch our tips gingerly." One guy pretending to be a King says that he will not lower his defenses because he does not want to get penetrated again.

Lynch steals every scene she is in as the former crack whore turned counselor. "I use to eat cocaine for breakfast." "I'm not here to service you, I'm here to service these young boys." "I don't wanna get to graphic but I use to suck his dick for drug money."

Although the movie is full of great lines, it is Paul Rudd's reaction to them all that really sells the jokes. He is the best straight man since Bud Abbot. I always appreciate an actor who can work sarcasm so well, "It's not you, I just don't like having dinner with people."

Role Models is not to be missed.

Role Models had a lot more heart than I epected.

Okay Eric, I have to say I had my doubts about this movie. The previews and your raving review didn't seem to go together. After watching it though, I have to say I'm in total agreement with you. This is a hilarious and feel good movie with a positive message mixed in amongst the jokes. Instead of the snarky, half ad-libbed comedies of the naughts, it reminded me more of a comedy from the 1980s.

I don't know if Ronnie is really the weakest part of the movie, but he's the most unrealistic. He and Seann William Scott though are clearly there for the humor. Paul Rudd and Christopher Mintz-Plasse provide plenty of jokes, but all of the movie's heart. And Rudd is, as you say, one of the best parts of the movie. He has that slow burn down pat.

You quoted some of my favorite lines in the movie Eric. The Quidditch line made me laugh out loud. Another of my favorites is when Rudd says, in reference to the Kiss song, "No, I like to rock n' roll all night and part of every day. I usually have errands... I can only rock from like 1-3."

On the surface this movie looked like just another Judd Apatow produced Frat Boy comedy, which is mainly why I avoided it when it was released and why I doubted your review Eric. While it does feature Rudd, who occasionally appears in Apatow's movies, it has more humor and a lot more heart than anything Apatow has done lately. 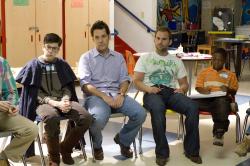 I agree. Role Models is a guilty pleasure comedy with a heart of gold. Sure it's predictable and juvenile but it has two things going for it. A talented cast playing likable characters and a script that's funny as hell (OK that's really three things). I cracked up throughout this silly but heartfelt movie.

Ronnie is obnoxious but also hilarious. This incredibly foul mouthed ten-year-old gets some of the movie's funniest lines. When Jane Lynch as Gayle Sweeney (as my brothers wrote, she's a real scene stealer) tells him to watch his language, he replies, “My language is English and this motherfucker tried to grab my joint.” A few seconds later he adds, “Honky wanted a fistful of my balls!”

The nerdy medieval fantasy players also have some memorably funny lines. My brothers mentioned several of the best ones but here's another, it's how one of them says good morning, “Diana has put away her bosom. Apollo has lifted his skirt. The day has been launched.”

Of course the stars, Seann William Scott and Paul Rudd, aren't left out in the funny dialogue department. Here's how Rudd, as Danny, describes his day spent with Augie, “Dude, I just spent the afternoon in Middle-earth with glee-glop and the floopty-doos, all right? Give me a fucking break.” Scott, as Wheeler, asks Ronnie's mother, “What I'm trying to say is that when I get out of prison, can I hang out with your ten-year-old son?”

Things get a bit sappy and heartwarming as the predictable feel-good ending approaches but it is balanced by an irreverent and vulgar sense of humor. The one aspect of the story that never really engages the audience is the romance between Rudd and Banks. She's fine in the thankless role of the estranged girlfriend but she doesn't have much to do except look vaguely unhappy. Fortunately the focus is kept on the two “Bigs” and their “Littles”. Off the top of my head I would say Role Models is one of the 25 funniest movies of the 2000's.