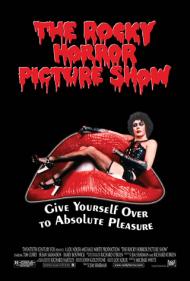 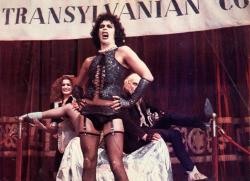 Frank-N-Furter sings while Magenta and Riff Raff look on.

The Rocky Horror Picture Show is the most famous midnight cult movie of all time. Produced for a modest 1.2 million dollars in 1975 it has grossed nearly 140 million to date in nearly continuous midnight screenings across the country, making it one of the most successful movie musicals ever. It is also a great campy rock show, adapted from the stage hit, with an amazing score that will have you singing along. This movie isn’t for everyone though, it is definitely one that you either love or hate. I am clearly in the first category.

As a gay teenager in 1982 I first saw Rocky Horror at a midnight showing in my hometown of Kalamazoo, Michigan. It was truly an eye-opening experience. This being the first time I ever saw an openly gay character flaunting his sexuality all across the screen. Tim Curry as Dr. Frank-N-Furter, a self-proclaimed “Sweet Transvestite”, is a wonder to behold, strutting, shouting and coyly flirting his way through the movie. His every movement, gesture and facial tic perfectly express the free-spirited, deranged and 100% hedonistic Frankie. His pronounced British accent enhances his charismatic persona and adds to his memorable line readings.

He, along with Riff Raff, Columbia, Magenta, and of course the clueless Brad and innocent sex-kitten Janet (a pre-stardom Susan Sarandon) are all iconic characters, instantly recognizable. To this day you can’t attend the New York City Halloween Parade without seeing at least one person dressed as a character from Rocky Horror.

The story is a silly and grotesque parody of 1950’s science fiction and horror movies. Brad and Janet are a young engaged couple coming from their friends’ wedding. It is, of course, a dark and stormy night. The road they are driving on is blocked and they get a flat tire. Janet asks what they should do and then Brad fatefully says, “Didn’t we pass a castle a while back?”

They arrive at the castle in the middle of one of “The Master’s” affairs. It is also the very night that Frank-N-Furter is putting the finishing touches on his creation. Like Dr. Frankenstein he has created a man. Unlike Dr. Frankenstein his man is a blond Adonis that Frank-N-Furter has created as a sex slave. Soon Brad and Janet are caught up in Frank-N-Furter’s dastardly plans, which leads to the eventual revelation that they are aliens from another galaxy and the castle is really a space ship.

Along the way the cast performs many catchy songs. The most famous being “The Time Warp” which comes complete with its own dance moves. Rock star Meatloaf shows up and sings an infectious song called “Hot Patootie”. My favorite song lyric is at the climax when Frank-N-Furter sings his mantra, “Don’t dream it. Be it.”

Rocky Horror Picture Show, besides having a great score and iconic characters, is a movie for social outcasts. Every gay boy, fat girl, geek, handicapped person, or racial minority knows instinctively that they would be accepted in Frank-N-Furter’s castle/space ship. Sure he may want to do unspeakable things to your body but hey this is just a movie after all. 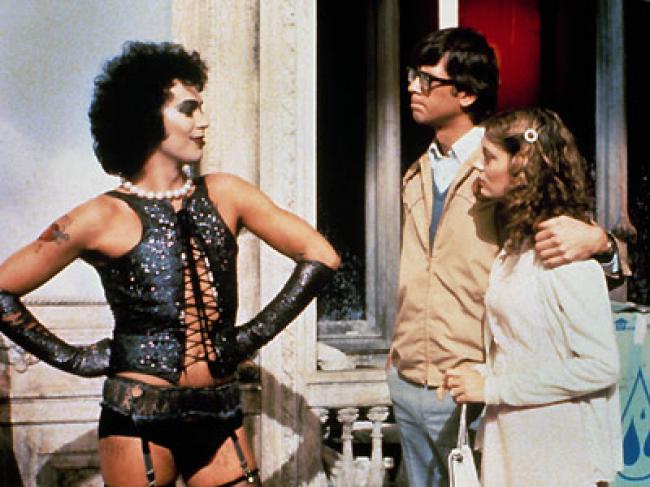 Although as a cult phenomenon, The Rocky Horror Picture Show is a unique cultural touchstone, judged purely on its merits as a movie it leaves plenty to be desired. I've no doubt that Patrick's personal experience viewing this movie, especially at such an impressionable age, were 4 star experiences, but without the benefits of those experiences, I just can't agree with his high rating. I agree with him that it's not a movie for everyone, but those who do love it--mainly gay men and freshmen theater students--really love it. The problems with the film are that it's a spoof that doesn't spoof enough, a comedy that isn't funny enough, and a musical where too many of the songs sound the same and feel like filler.

The script and the songs were co-written by Richard O'Brien, who also stars as Riff Raff. According to internet research, he wrote it over the course of one winter just to occupy himself. As a lover of Sci-Fi B-Movies from the 1950s and '60s, he wanted to write a loving spoof of the genre. Unfortunately, his finished script was only about 40 minutes long, which is about how much of an actual story there is in the finished film. And so more songs were added, including the film's most famous, "The Time Warp." The result is a lot of padding.

I disagree that the songs are catchy, apart from "The Time Warp" of course, which will be stuck in your head for days after watching. The rest of them sound suspiciously like poor ripoffs of frequent Meatloaf collaborator Jim Steinman. Patrick called "Hot Patootie" infectious, but even just hours after watching it I'm struggling to remember a single lyric. The only lines of any of the other songs that stuck with me are, "Damn it, Janet!" and "T-t-t-t-t-touch me", but that last one might have stayed with me because it was sung by a still young enough to be hot Susan Sarandon in just her underwear.

There are some humorous moments. The line Patrick mentioned about the castle is one of the best. And Frank-N-Furter's seduction of both Janet and Brad is likewise worth a chuckle as is almost everything Tim Curry does.

Perhaps the best thing about the film is its look. The costumes, which were done on an astoundingly low budget of $1,600, are indeed iconic. Frank-N-Furter's corset and torn fishnet stockings are instantly recognizable, as are the characters of Riff Raff and Magenta as the bizarre butler and maid. Costume Designer Sue Blaine didn't just influence Halloween costumes, but the world of punk rock, drag queens, and even high fashion.

Although no doubt first home media and later digital versions have shrunk the communal experience of cult films in a public theater, this one has managed to live on decades after its release. It's that communal experience that has kept it alive. For some it's an annual tradition to be watched again and again. As for me, having seen it a handful of times, I can only say I hope I never have to do the Time Warp again. 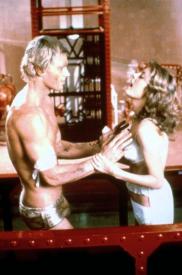 I am with Scott on this one. Without the audience participation enhancing the viewing experience, The Rocky Horror Picture is, for me, a curiosity at best. I remember being in high school and hearing the reaction some friends had after having gone to a midnight showing. They sure made it sound like a fun time but not enough that I cared to actually go myself.

Everything they went on about was what the audience was doing and not what was happening on screen. Watching this by myself, I counted the minutes until it was over. My son walked through the living room during the Time Warp number and asked, “What in the hell are you watching?” A few moments later, he came back through as Frank-N-Furter made his appearance. “You watch some weird shit.” He said to me. This is the kind of movie that begs to be criticized, made fun of and laughed at as much as laughed with.

Dr. Frank-N-Furter makes like Dr. Victor Frankenstein and Rocky his creation. Just as with Mary Shellie’s monster, Rocky is scared of fire and it inspires him to break free from his chains and escape into the night. With the exception of Magenta later sportinng a Bride of Frankenstein hair-do, that is pretty much where the parody begins and ends.

Nothing about this movie makes much sense. I get that Patrick would have enjoyed this when he was young as the message I got from it is that you should embrace your sexuality. As a young gay man yet to come out of the closet, this must have been quite a life affirming movie going experience for him. For me it is just a freak show set to mostly forgettable music.